I installed a couple of Blue Sea Dual USB Sockets in the Jeep to easily charge gear. From $20.56 From CDN$36.7 on Amazon

NOTE: What I am doing here is very controversial. Interacting with the chimps is dangerous. Because we are genetically so similar, I could make them sick, and they could make me sick. Also, they are easily strong enough to tear my arms off, so there is risk there. (they never once show any aggression, the young ones just play a little rough).
I realize I am encouraging what is going on here (touching the chimps), and I am on the fence about it. On one hand these chimps need help and the organization needs money to care for them. On the other hand I might make them sick which would be a disaster.

With that out of the way…..

Driving into Marienburg is extremely beautiful, bumping along a small dirt road, following the bank of a mighty river running high. I pull into grassy clearing and walk over to the people I see there. Before I realize what is happening, a baby chimp runs over and wraps himself around my leg, staring up at my face. For three minutes I am unable to move, stunned into silence by the tiny face staring inquisitively into mine.
Here in Marienburg is a chimp rescue centre that is run a little differently than most. All the chimps here have been rescued from people keeping them as pets – often these animals have grown up thinking they are people. Because of that it would be very detrimental to immediately separate them from humans, so the rescue centre takes the opposite approach and encourages the keepers and visitors to interact with the chimps. The youngest of the chimps are allowed to always be out and about with people. The middle-age chimps spend many hours a day together and isolated from people, and then go for a jungle walk each day with whoever happens to be around. When the chimps are old enough and confident enough in their group, they are moved to a nearby island where they will live out their lives without interacting with people. The island is close enough I can hear them screeching, and the keepers look in on them from time to time to make sure everything is OK. While these chimps will never live a “normal” life, this spectacular considering where they have come from. 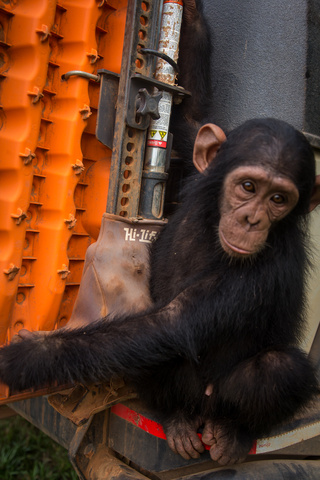 Hi-Lift being put to the test 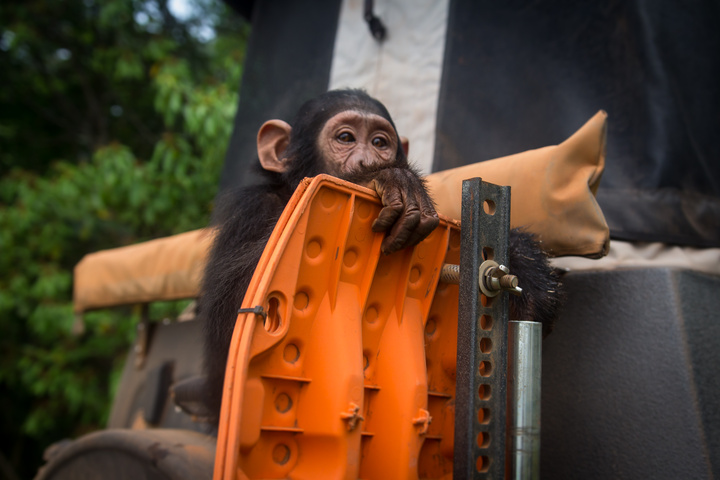 Peek-a-boo over the maxtrax

In the late afternoon sun I setup camp on the banks of the river while listening to the endless screeching on the nearby island, impressed to be in the company of many more chimps than people.

In the morning the youngest ones are full of beans, and I spend an hour trying too cook breakfast while they endlessly climb on the Jeep. They grab everything, and I really don’t want them to get inside. Of course any time I say they can’t do something, or pick them up and take them away, they want to do it twice as much. Even the little guys are shockingly strong – certainly stronger than me. 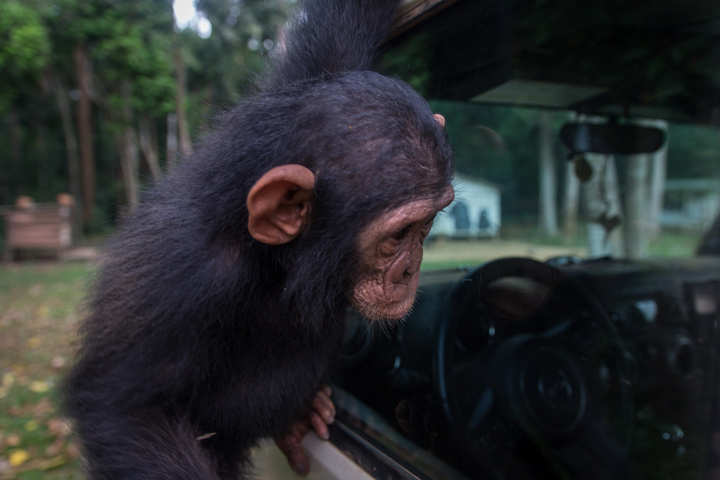 Getting ready to walk in the jungle I am not really told what to expect. I have taken off my necklace and only have my small go pro hidden away, apparently they love to steal anything people show an interest in, so cameras are on the top of the list. When the enclosure is opened I am frozen as six or eight almost full-sized chimps excitedly rush towards me. One large female immediately climbs on my back, wrapping her arms and legs around me. I can’t believe how heavy she is, and thankfully she immediately becomes very peaceful perched on my back. I think she is happy for the high vantage point. 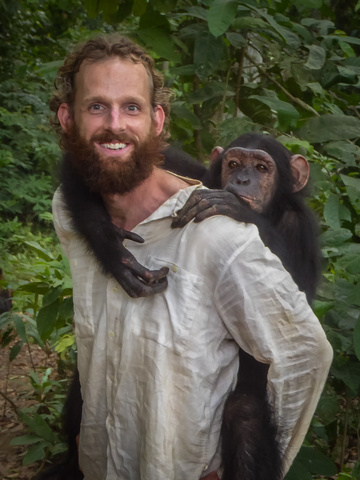 We set-off down the trail and venture deep into the jungle. Some of the chimps are happiest up in the trees and vines, some walk on the ground near my feet and others want to climb all over me and have me carry them. At times the youngest want me to carry them, though they tire of that after thirty seconds and scamper back down to the ground. 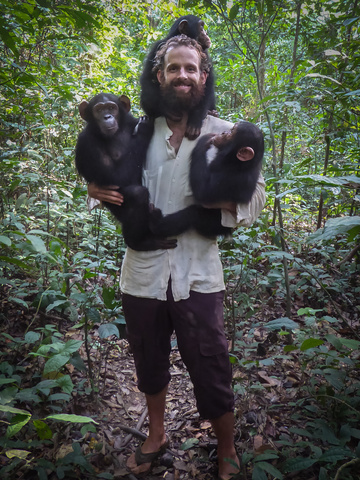 Why do I feel like I am training for Dad duty one day?

I am shocked to not just be watching their interactions as I have in the past, but actually be right in the middle of it.

At times, I am the cause for a disagreement when one chimp or another tries to climb onto me and other wants the spot instead. The youngest of the chimps have endless energy, continually wanting me to spin them upside-down and every which way. Sometimes the littlest ones use their teeth, which never draws blood but does hurt. The bigger ones are always gentle. 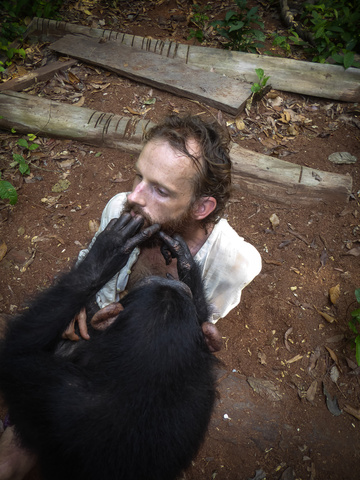 After walking a while we sit in a small clearing, and the chimps play excitedly in the nearby trees and vines. The big female who climbed on me at the very beginning is extremely relaxed and is happy to groom me, get tickled by me, and investigate the buttons on my shirt endlessly. At one point she does somersaults through my shirt, clearly smiling and enjoying the whole thing. I am dumbfounded to stare into her face, only five inches from mine, and see how similar her expressions and reactions are to mine. 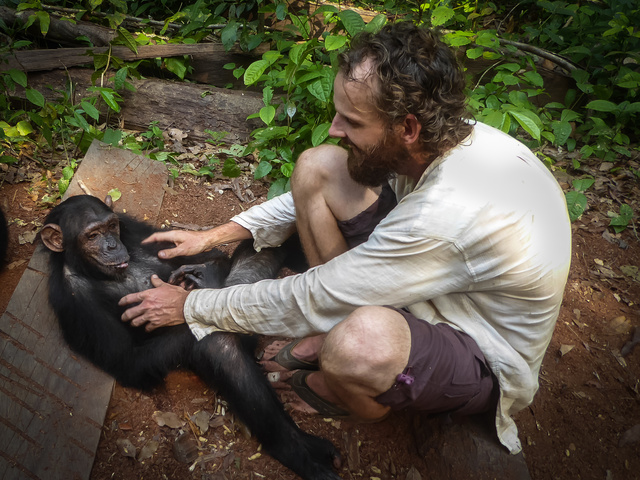 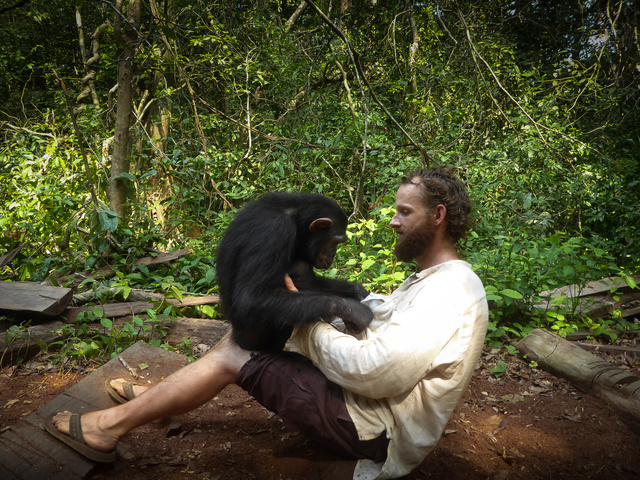 We stared into each others faces for a long time

This is by far the most intense animal experience of my life, something I will never forget. 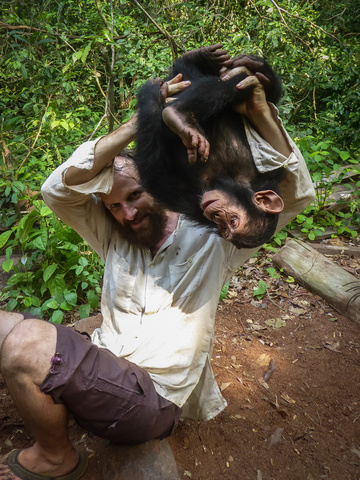