My GoPro Camera has been awesome for action video work. From $165 on Amazon

So I’ve talked a lot about the actual tree planting side of tree planting, but there is a lot more to it than that. Because you are in iso camp, you live and breathe tree planting 24/7. You sleep in a tent every single night with the mosquitos, black flies and bears. You eat every single meal as a group and most importantly, you hang our with your fellow planters all day every day.

There is no doubt in my mind that your fellow planters have the ability to make or break the experience. Everyone knows it’s insanely hard work. Everyone knows the bugs are unbearable. Everyone knows it’s stupidly hot. If you ever actually talked about it, any sane person would curl up in the dirt and cry. And that’s the whole thing – every single person was happy to be there. Everyone smiled, everyone joked and everyone was positive. Even at the end of a stupidly hard day, people found the energy to juggle, or play volleyball, or throw a frisbee. Maybe we were all insane, maybe we all had heat stroke, or maybe it was a camp full of positive, can-do people who just couldn’t be beat down. 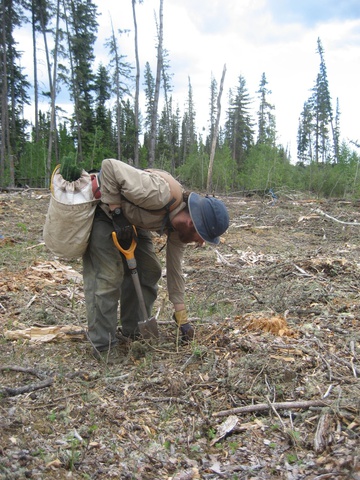 At times it was taken to a level beyond anything I’ve seen before. Tim had more blisters than feet – he would hobble around camp in obvious pain at night, but each morning, he was the first one out to the block loading up with trees, a smile on his face. Eric kept planting with “a sore back” – it turned out that most of his lower back was shades of purple and black. When I asked how much it hurt he shrugged and said “it’s sore”. Aja took a tumble and cut her hand on stick, when I asked how it was she showed me inside-hand stuff poking to the outside – her only concern was how many days she would be unable to plant while injured.
(Tim later had some days off and went to a doctor, Aja got two stitches and as far as I know, Eric kept planting).

The particular company that I was with has been doing this for a really long time, and it showed. The had figured out the right balance needed to make sure everyone could earn lots of money, but also keep themselves healthy and happy. All meals were carefully prepared with maximum nutrition and were very much all you can eat. Each night when we arrived back from planting appetizers were immediately available – to fill the void before dinner came and hour later. The camp had hot showers and worked a 4 day on, 1 day off schedule.

And what a day off it was. “Party night” was basically an excuse to see how much alcohol we could each consume – and given what we’d been doing for the previous 4 days, that was not surprisingly very little. A much loved game, “boozeby” was played with great enthusiasm and intensity. It involved a frisbee, beer and beer bottles balanced on poles. Mike and I were the obvious favorites but were knocked out by the head of camp and his ring-in partner after some great throwing on their behalf.
The night was a great chance for everyone to let their hair down and then do precisely nothing the next day.

On my last day I got to take a ride to work in a Hagland – think of a small tank and you’re pretty much there. To get around the horrible roads a vehicle with tracks is essential and these things are so tough that Canada has 15 or so on active duty in Afghanistan. 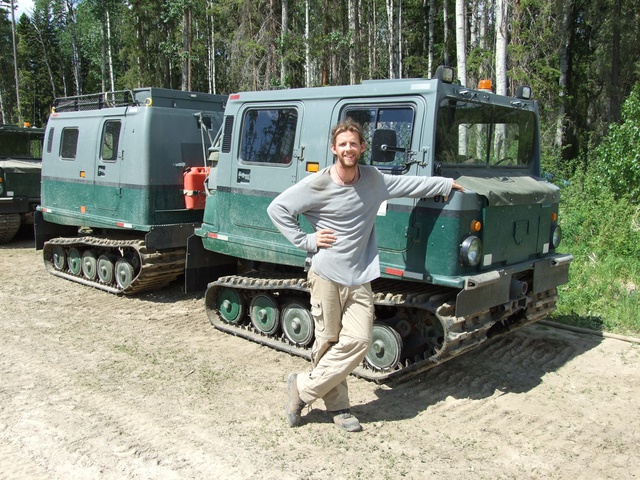 Where's the guys with guns?

I thought I would be able to help Mike earn tons of money while I was there, but unfortunately there is so much practice and skill involved in actual planting and I was waaaay to slow to be any use. Mike was aiming to plant 2000 – 2,700 trees in a day and I would have been luckt to add a couple of hundred to that. In the end, I carred the backpack of trees and handed them to Mike and he needed them. This worked out really well because it meant we were right next to each other all day and had tons of time to chat about everything and nothing.

Tree planting – could I do it? I think so. Would I be very good at it? I really don’t know. It’s a lot harder than I ever thought and the mental struggle of doing the same thing every day would wear me down for sure. I had a great time and I wish everyone in camp the best of luck for the season.
Thanks for having me guys,