Mike’s directions were perfect. The first email said turn right, left, right. The second email said left, right, left. I knew exactly what to do – make it up – and drove directly to “R Storage” without getting turned around once.
It was time for my first side adventure of the trip. Mike had been tree planting out of Slave Lake, Alberta for about a month and he had found a way to get me out there with him for a few days. I’d always wanted to give planting a go, so I jumped at the chance.

I had to meet up with some guys from the planting company because getting out to iso (isolation) camp was not a straight forward thing to do. After 150km of highway and another 30km of unsealed logging roads we had to abandon the truck and move everything into a mule. When the logging companies are done in the winter they remove all of their bridges to make it harder for joe hunter to travel around in the middle of nowhere. The first thing the planters had done was re-build two bridges, but they were small and the road from here turned to glue when it rained, so regular trucks could go no further. Past here we would only use a mule, ATV or Hagland (more on those later) for transportation.

It was 11pm when I arrived in main camp and the sun was still very much up. Mike had been waiting up for me and after chatting for 10 minutes while I put up my tent he was pretty excited to goto sleep. Breakfast was at 6am he said cheerily – “Don’t worry, I won’t let you sleep in”. 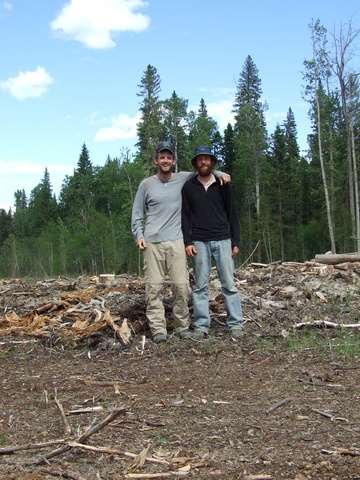 Dan and Mike in the field

Breakfast and a whole bunch of introductions were over all too soon and Mike and I were talking out to our “piece” of land to plant on for the day. A tree planter wears a pack not unlike a hiking backpack with two huge containers on each side for trees. 270 trees per load weighing around 35 lbs. They use a very small, very short shovel to make a hole just big enough for the tree, stomp it in and move onto the next tree. But that’s kind of the obvious easy part – the next bit is spacing.

The trees need to be planted to a certain density based on the current contract – we were aiming for 1600 trees per hectare which meant the average distance between trees needed to be 2.7 meters. Once you’ve laid down one nice straight row it seems like you should be able to turn around, and plant another row 2.7 meters from your last. That would work really well except that the trees you just planted do their very best to hide; they hide behind stumps, under sticks and logs and best of all they are the exact same shade of green as the five hundred and fifty six million pieces of old tree lying around. For the life of me I couldn’t see a freshly planted tree even if I was standing directly on top of it. 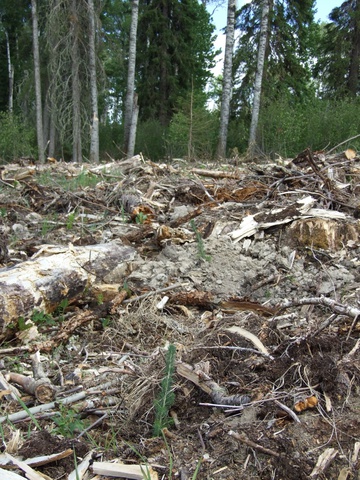 How many trees can you spot?

To measure if you were plating at the correct density you could lay down a “plot” – stick your shovel in the ground a tie a piece of string to it. Walk around in a full circle and count the trees that lie within a 3.99 meter radius. The contract and some maths meant we needed to find eight freshly planted trees within that circle. The contact allowed some leeway, 7, 8 or 9 was OK. We were checked on our work and would have to re-do anything that was not up to scratch.

Another thing that I was completely unprepared for was the state of the ground we were planting in. Sometimes it was “cream” – there were no logs, sticks, twigs, sawdust mounds or anything else to get in the way. One good hit with the shovel and you had nice black soil to shove the tree into. More often than not the ground was covered with 5 inches of debris from the previous generations of trees, so in order to get down to the soil you need to use your feet to scratch away the junk, called “screefing”. Sometimes you would be standing on 3 or 4 layers of logs putting you at least a foot or two off the dirt. Again, you have to find a way to clear whatever was in the way to get down to the soil. Of course
there is the constant fun of swamps to deal with – five steps in a row are high and dry then the next one you are mid-shin in mucky water, affectionately called “booting”.

While thinking about everything above, remember that tree planters are paid by the tree, not the hour. So even after you’ve climbed over logs, walked through swaps and finished your 270 tree run, you really get no relaxation from sitting down in the shade for 2 minutes to cram as much food in your face as you possibly can. Your mind immediately wanders to the fact that you are currently making $0/hr and that is bringing down your average and to make today profitable you’ll have to work even harder.

If you can do everything mentioned above in around 10 seconds per tree and you don’t ever stop for more than a few minutes and you work from 8am to 6pm you can hope to make something like $300 in a day. Before tax and camp costs, that is.

Do not be fooled – tree planting is extremely hard work. If you are up for it, you can make good money.

I’ll talk more next time about the people and community spirt at camp. 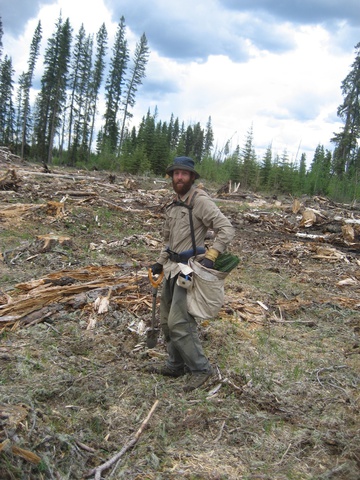 Getting ready to plant....

Mopar Steel Wheels are great because they can be smashed back into shape if damaged. From $219.43 on Amazon

My ARB Awning keeps the sun and rain off my cooking area. From $255 on Amazon