I run LED Driving Lights from Rigid Industires to light up the night. From $click From CDN$760.52 on Amazon

Driving into Dawson Creek was a very unexpected experience for me. In the five and a half years since I lived in California, I have dreamed of the Alaska Highway and everything beyond. More than that – I’ve wanted it down to my very core. And now, a leisurely two day drive from Calgary, here I am standing at the Mile 0 post in the middle of Dawson Creek. All that time of wanting, and it was right here all along. The drive wasn’t long or difficult, the logistics were simple and I didn’t even have to sacrifice any goats – to be honest, it was dead easy. I jumped in the Jeep and drove here.
Easy. 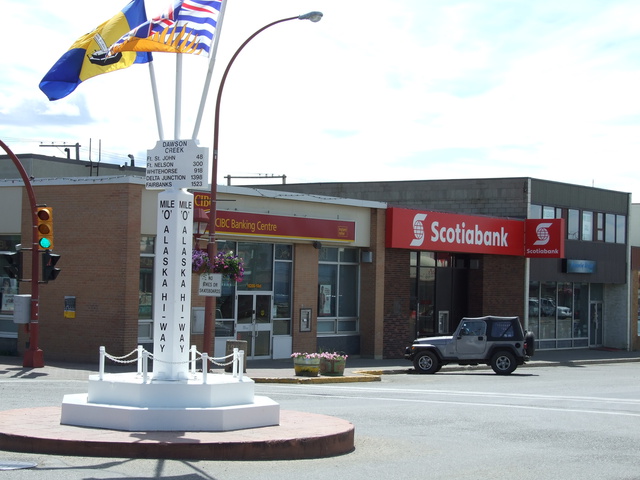 I had planned and dreamed and planned for so long, leaving Calgary turned out to be quite anticlimactic. I had originally thought I would be so overcome with emotions I’d have to pull over and take some deep breaths, you know, like in the movies when the hero rides out of town. But there was none of that. It really felt like a regular old road trip, gone for the weekend type of thing.
I don’t think it’s sunk in yet that this is now my life – this is what I do. A few months should take care of that

Sitting by the Mile 0 marker I saw a motorbike roll by with Columbian license plates which spurred a whole train of thought for me. At first I was excited – “Man”, I thought “This guy is doing it!”. Then I was a little disappointed that I’m not the first to try this – not blazing a new path all frontier like. Of course I knew that all along, but this was the first in-my-face example. And then a little later, I started to get really, really excited, thinking “This really can be done”. “All those kilometers and border crossings and drug dealing, gun wielding exclusive membership golf clubs really can be navigated.” Hell yeah.

More than anything else though, it really is clear to me the best time to turn off the TV, get off the couch and live your dreams is now. Not next summer, not when the car is paid off and definitely, 100% not when this season of Lost is finished. NOW.

It’s not nearly as hard as you think it is, and it’s scientifically proven to be about 1000 times more enjoyable.

I’ve been playing around with HDR photography lately, so I’ll leave you with a shot I just took of the great highway winding north. The mountains just came into view this afternoon and it was a really familiar feeling to see them again, little patches of white visible even at this distance.

It’s 9pm and I’m happily working on my tan, the sun still about 30 degrees above the horizon. I think it will go down for an hour or two tonight, but after another couple of days driving north I’ll have my endless summer!