Rigid A Series LED lights are great for the interior. From $click From CDN$180.12 on Amazon

Preparing to leave Uyuni I feel like we’re setting out on a mission to mars. We being myself, Warren and Sara in their Toyota 4Runner and Rob riding a Harley Davidson.
No, that’s not a typo. Harley Davidson. Street tires. 10cm of ground clearance.
I ask all the guides I can find exactly which tracks we want to take (the biggest ones), how far we need to cover gasoline-wise (500km, 600km to be safe) and if we’re going to make it (maybe).
Still unsure of what to expect we pack food for three nights, fill our drinking water and for the first time I carry a jerry can with 20 extra liters of gas. 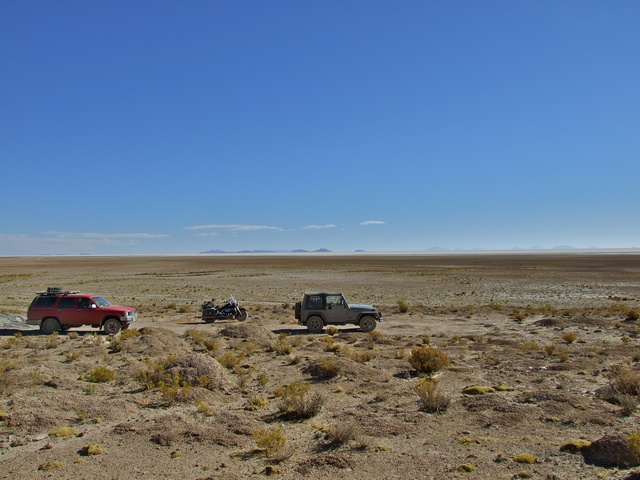 The three vehicles almost on the flats

En route to our entrance point of Colchani I’m stunned to see an Emu & chicks.
Again, that is not a typo. Emu. In bolivia. More bizarre.
We’ve heard over and over the most dangerous part of the salt flats are the entrance points – sometimes with heavy rain they can turn to muddy salt water where a vehicle will sink up to it’s axles. We follow the heavily used track and after navigating a few small puddles, we’re happily rolling on solid salt. Bizarre is now normal.
The surface is extremely hard, though not perfectly flat due to the salt forming hexagon like shapes on the surface. 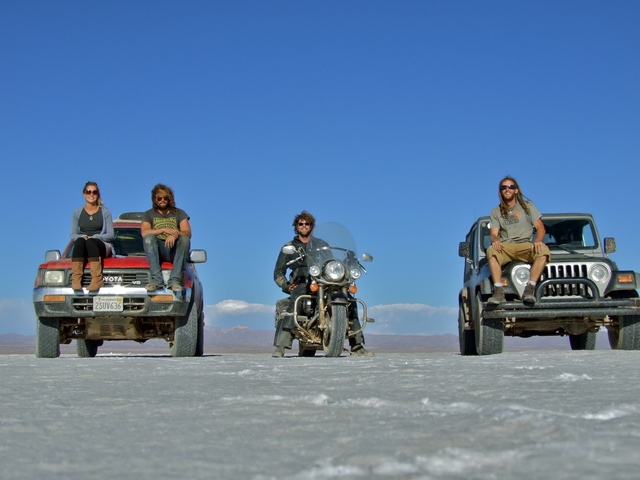 The amigos elated to be on the salt flats 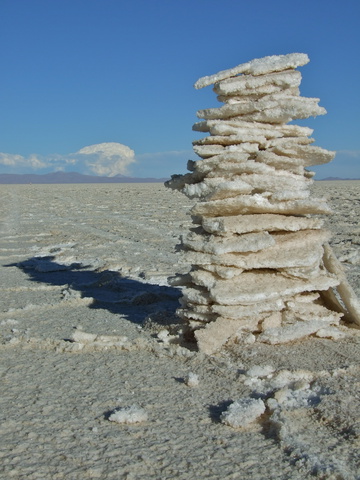 There are heavily used ‘roads’ where black tire tread makes it easy to follow, or it’s perfectly OK to veer off in any direction and go wherever I want. We’re constantly stopping to take photos and it’s hard not to drive a little crazy with the other guys so close by. Some guides point to the tracks we want to follow and we set off, grinning from ear to ear on our way to Incahuasi Island – A piece of land jutting up from the flats where we camp for the night. 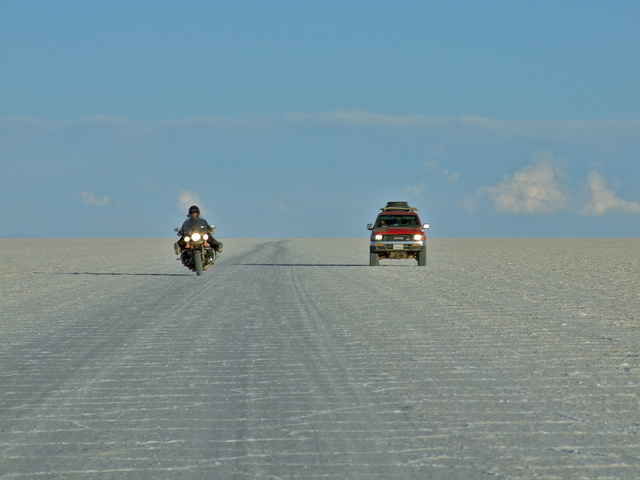 Rob & Warren on the flats 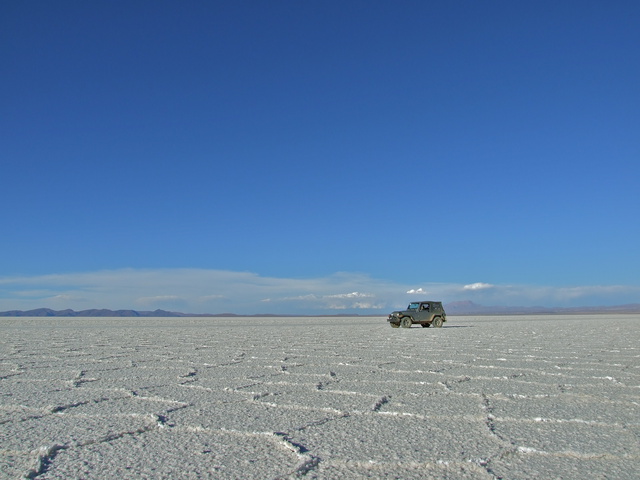 The views go on in every direction

In the morning we all smile and laugh while experimenting with ‘perspective’ photos with all the props we can find. Because there is nothing to give perspective, it’s easy to make objects look extremely small or big, just like being on the moon. 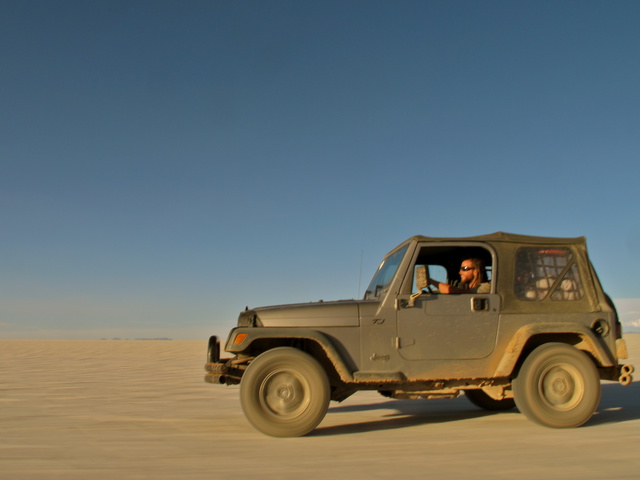 Rolling on the salt flats 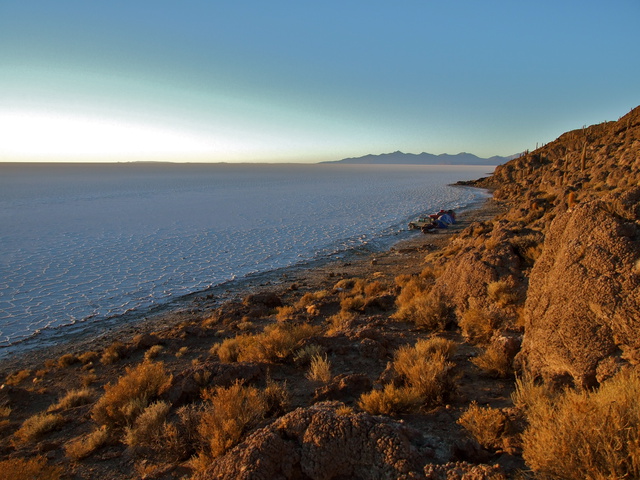 Our campsite at Incahuasi Island 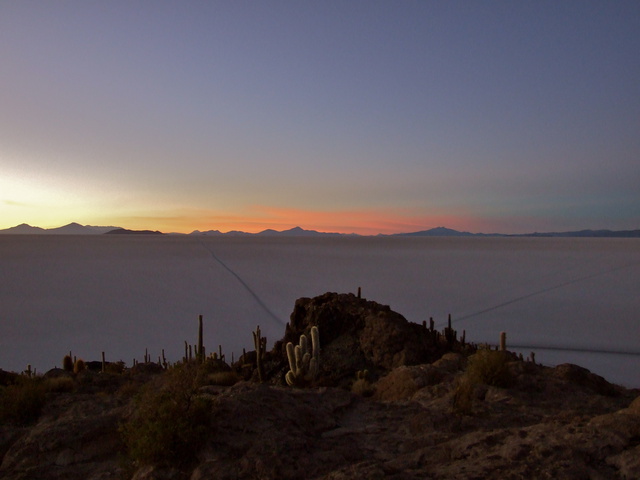 Sunset over the salt flats

It’s great to have so many hours to really soak in the alien landscape and every few minutes we all go silent and just stare around us, still disbelieving. 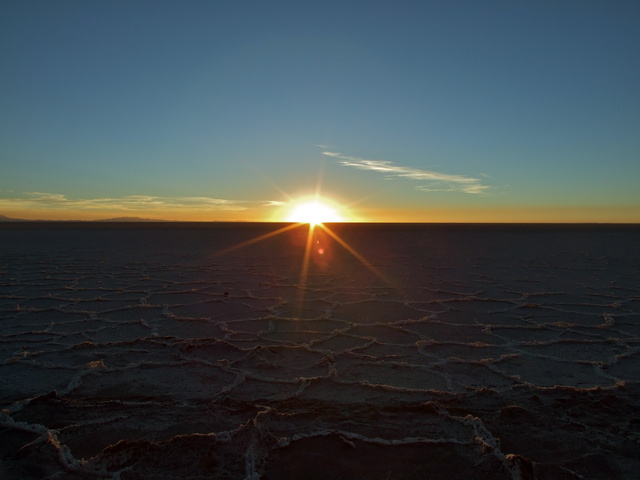 Sunrise over the salt flat from Incahuasi Island 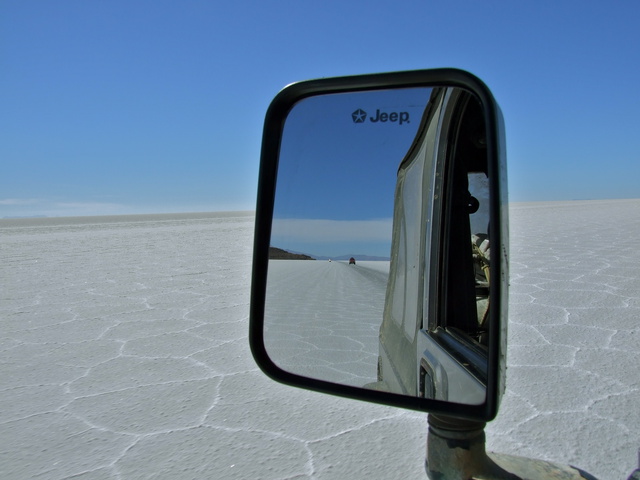 The views in every direction 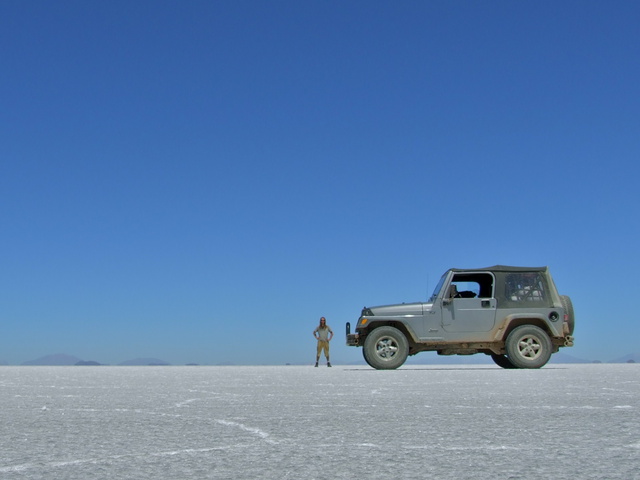 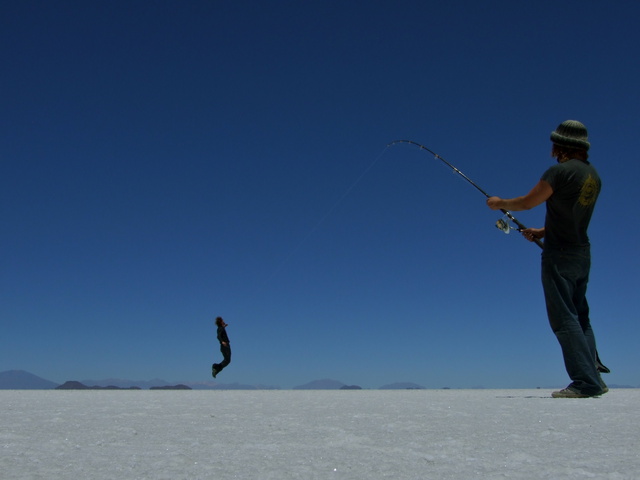 Throwing the frisbee out here is great fun

Reluctantly, we move South, and safely off the salt flat, beginning the next part of the adventure…