My Trangia Lightweight Backpacking Alcohol Stove has been reliable for 8+ years. From $62.99 From CDN$175.14 on Amazon

From the minute we drive off the Uyuni Salt Flats we’re on extremely bad gravel roads, sometimes doubting the existence of a road at all. Every few kilometers the surface changes, keeping us on our toes. At various times we encounter deep sand, rock slabs, powder-fine dust, shallow river crossings and the occasional small salt/hard mud flat. It doesn’t take long before Rob is sweating profusely trying to keep the Harley upright and inevitably he drops it in the sand, deep enough to wrench even the Jeep. Even with most of Rob’s gear in the Jeep, the Harley is still too heavy to pick up single-handedly, so Warren and I dash over to lend a hand. 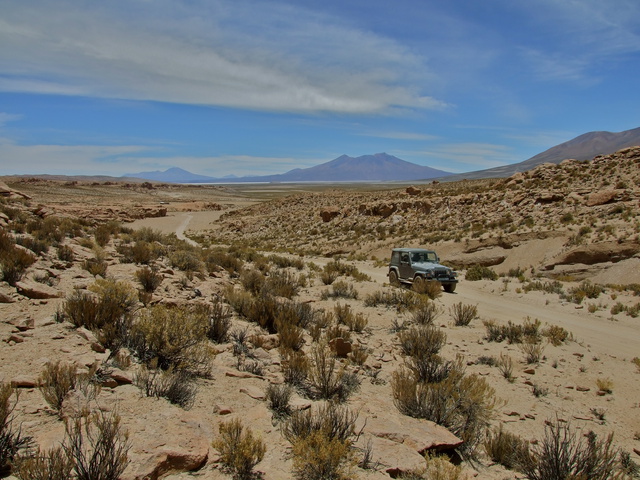 We soon develop a rhythm whereby whichever vehicle is closer jumps out to assist Rob as the Harley topples over time and time again in the deep sand, or else gets beached on the home-made skid plate. Following the most obvious track and trusting the occasional sign we miraculously arrive in the little village of San Juan, a great rest stop. Just twenty minutes out of town the Harley repeatedly loses power, to the point it’s unridable. Over the course of an hour and many false starts we diagnose and tighten a loose battery connector, to get the monster roaring to life once again. Since sunset the road has become unbearably cold and windswept and even after I put on all my thermals and 5 layers my extremities are numb, and I have a bad case of windburn on my arms, face and legs.
Likewise for the others.
We head back into San Juan and get a warm hostel for the night, exhausted and excited at the same time. 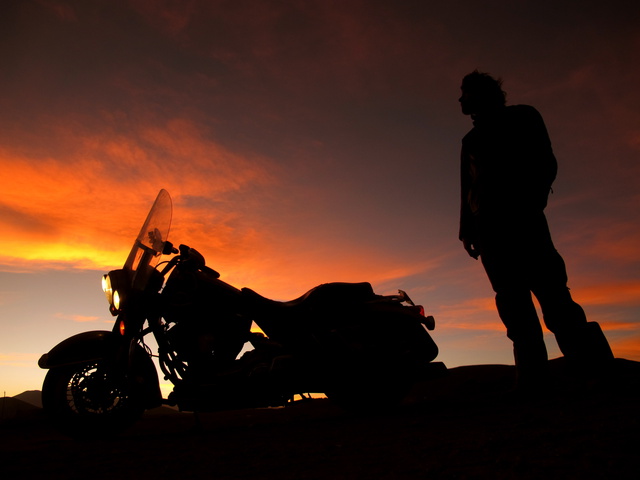 Rob and the mighty Harley

The morning is crisp and clear and we leave town in a different direction than yesterday, on the advice of locals. The salt flat of Chiguana is a great relief after the horrible roads and we can move along at 60km/h on even the worst parts. After posing for photos with the heavily armed military guys in Chiguana we take their advice and turn South, quickly realizing we’re on a tiny track that is seldom driven. There can be no doubt, this is a desert, complete with sand dunes, crazy rock formations and extremely little vegetation in the baking hot sun. 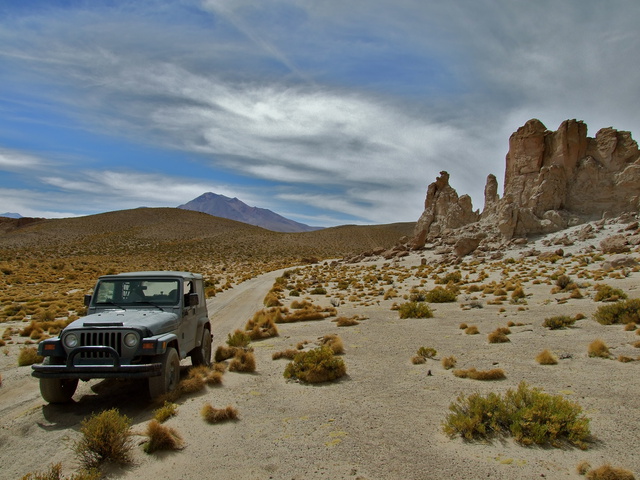 Crazy rock formations in the desert

Using my map and compass I’m pretty confident I can navigate us around and feel like the 6000ish meter mountains surrounding us correspond with the map nicely. When we arrive at the sizable village of Copacabaña, confidence in my navigation drops, and not for the first time in Bolivia I have absolutely no idea where we are. Incidentally, I’ve still never seen that village on a map and have no idea where it actually is. Again, our faith goes to the locals, and again we drive through, in and around an enormous desert, this one packed with rock towers and bright red dirt, reminding me of the national parks of Utah. With little confidence I conclude we’re driving on roads that are not on any of my maps, and we’re happy to pass a few Landcruisers packed with tourists going the other direction – a sign we are probably (hopefully) on the right track.
Late in the day we arrive at Laguna Hedionda, packed with pink flamingoes, and hope that a few abandoned rock huts will provide enough protection for camping from the frigid wind whipping around us. 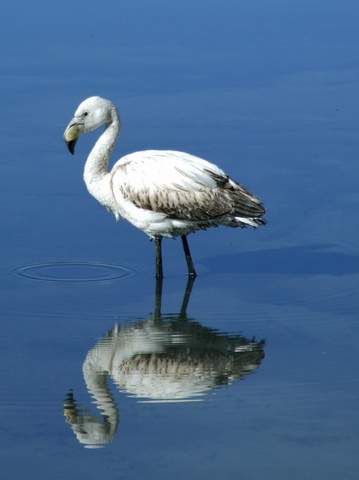 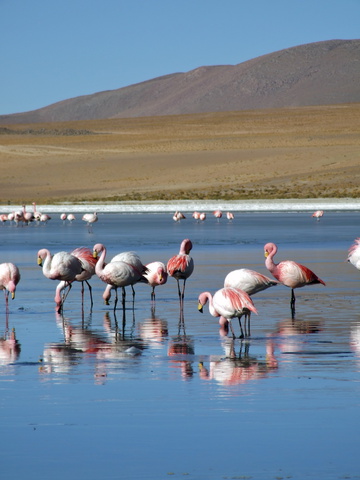 The older ones turn pink from eating shells

The temperature plummets overnight and I’m not surprised to find all my water bottles are frozen solid, as is the washer fluid under the hood of the Jeep. Early in the morning Rob and I get separated from Warren and Sara and after waiting almost an hour I drive back the 10km, and start to get a little nervous about gas. After scraping over a rock, Warren has found oil leaking from the transfer case and is rolling around in the dust trying to figure out what’s going on. A driver from one of the tour companies assures us it’s just the breather venting a little oil because of the seriously cold night, and we move on, keeping a close eye on things. 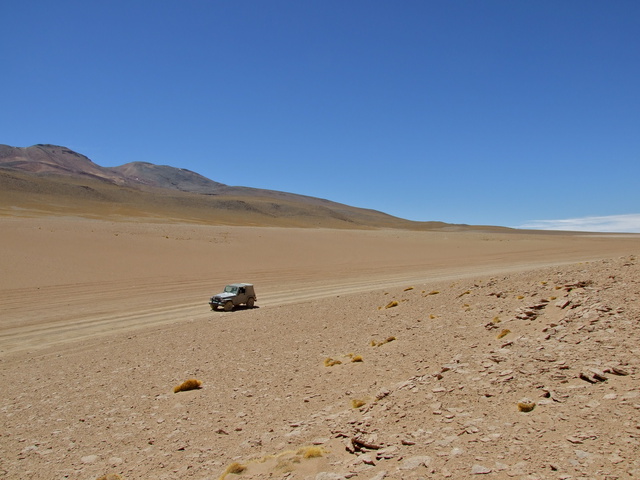 Our days begin to blur, moving from one flamingo-covered lake to the next, crossing sandy, rocky and then pebble strewn barren deserts, all the while at around 4500m in elevation. Highlights include a stop at the rock tree, the stunning orange & white Laguna Colorada and camping at a hot spring on the side of the road. The nights are now excruciatingly cold and the sun blazes during the day, causing ever increasing sun and windburn. The exhaustion and stress begin to tear at us as we’re all anxious about our quickly depleting drinking water, food and gasoline supplies. 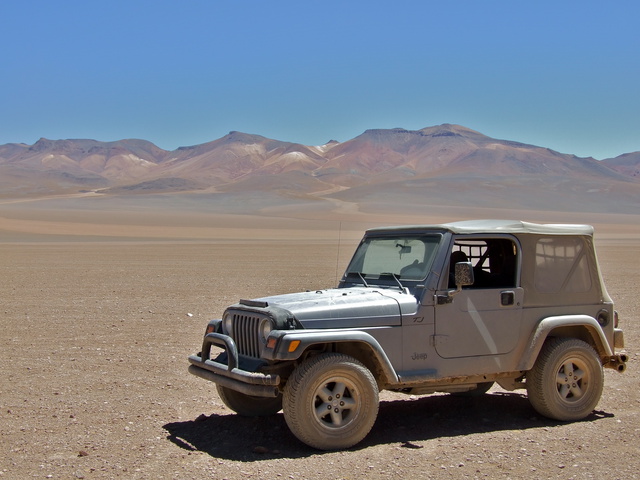 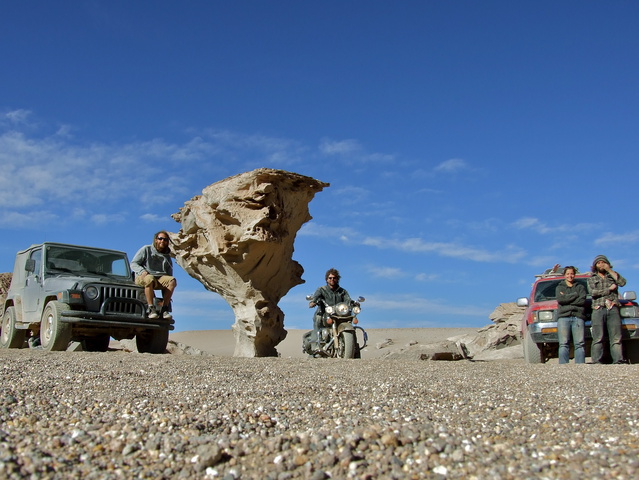 The amigos at the rock tree

Without a doubt this is the kind of adventure I’ve been searching for my entire trip, maybe even my entire life. There is no safety net, no room for error – seriously far off the track, rolling with the punches, thinking on my feet, living it to the fullest.
By far the most full-on, out there adventure of my life. 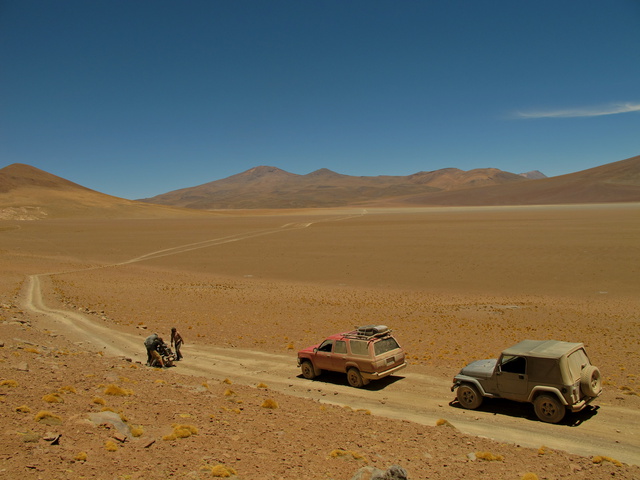 Three vehciles in the desert 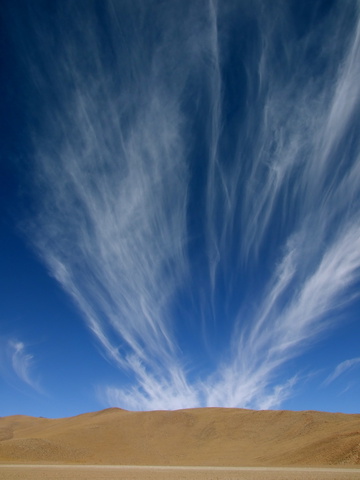 On the sixth and final day we’ve all hit our limit, physically and mentally. The last liter of water is shared out between us, and all gas containers have been empty for days. Everybody we ask is certain of the distance we still have remaining, though none of them agree. The fear of running out of gas is too great, so we buy more from a guy on the side of the road. Rob doesn’t have any Bolivian money remaining, so I lend him all I have, closing down my options fast.
Further South at Laguna Verde the wind torments my ragged state of mine and I can only stand outside the Jeep for 10 seconds, long enough for one photo. I become fixated on the enormous Volcán Licancahur (5760m), sitting at the far end of the lake and marking the border with Chile.
Almost there. 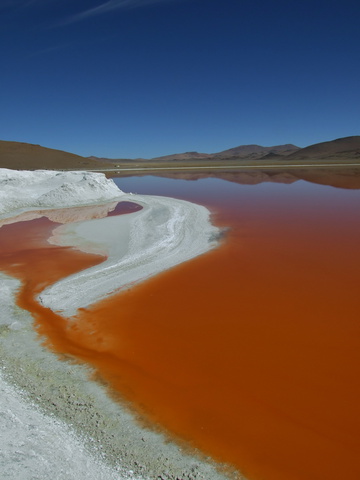 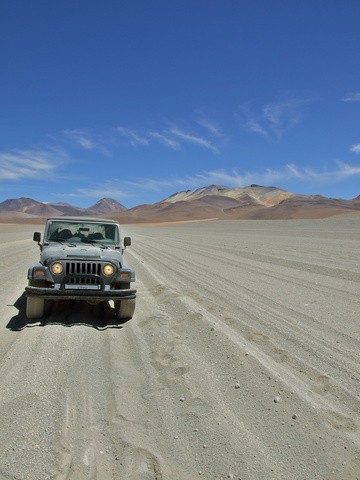 After a stupid debacle where the trucks are separated from the motorbike, I end up driving back around the entire lake, yelling and screaming to myself about the 35km of gas wasted the whole time.
Eventually we find Rob waiting at the border, and we all manage to grin and laugh when we realize we’ve done it. We’re there. 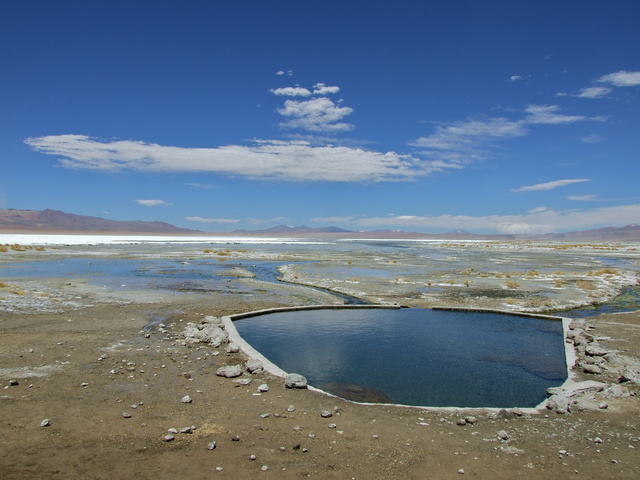 Amazing views from the hot spring 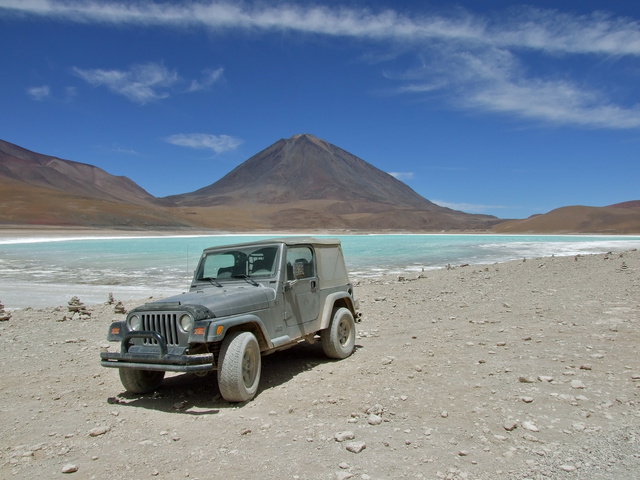 Laguna Verde, with Volcán Licancahur (5760m) in the background

(A note to anyone attempting this – From the last gas station in Uyuni to the Chilean border we drove 570km with minimum back-tracking and screwing around. It’s another 45km to the first gas station in Chile. Driving at extremely high elevation and crawling through sand and rock deserts decreased my usual gas milage by 25%-35%)