I have a Torque Wrench on board to make sure my suspension bolts are in spec. From $96 From CDN$245.88 on Amazon

My hitchhiker and I parted ways and I continued on the road north to Fairbanks. My first mechanical issue came in the form of a rusty screw in a tire – getting it patched was easy but it turned out one of the lug nuts was cross-threaded and had to be snapped before I could even get the wheel off. At first I was grumbling at the shop who worked on my diffs – the last place to have that wheel off, but then I was happy that this all happened in a town, in front of a mechanic shop. I was about a million times better off than if this happened somewhere up in the arctic circle. 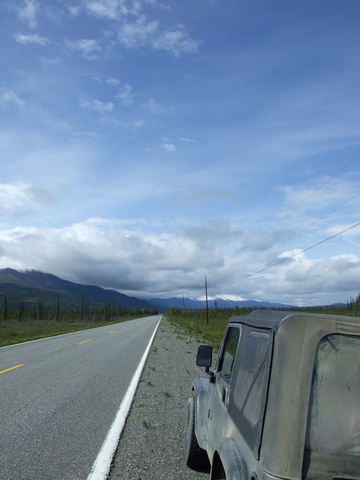 I know I use the word a lot, but driving around Alaska really does seem to be epic. The rivers are epic, the wildlife is epic, and the mountains are especially epic. The Canadian Rockies were my backyard for two years and I explored them pretty well – but Alaska seems somehow different.
Bigger. Stronger. More. 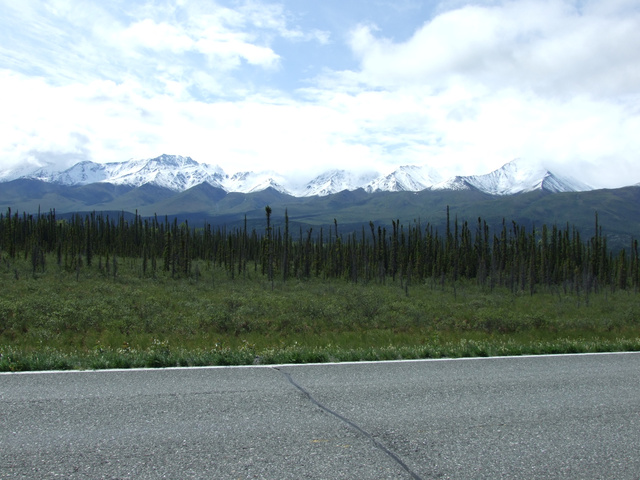 Mountains on the side of the highway

I hope I can give you a sense of that over the coming weeks.

The mix of summer colors & sunshine with the obviously fresh snow on these mountains really screams out that something is going on here. Within the first one hundred miles I’d seen a couple of moose and a calf. One of them was standing in a picturesque knee deep river, just until I got my camera all lined up, when it wondered off into the bushes.
Even big moose are skilled at disappearing I’ve discovered.

I’ve been working on my ‘Guerrilla Camping’ skills as I go along. This is what I call the fine art of free camping. It takes a lot of skill and practice to find a nice spot to camp for free – not too close to the road, a really nice view, minimal mosquitos and most importantly somewhere that nobody will yell at you. I like to think I’m going to get so good at this that one day other people will show up and upon seeing the superlative campsite I have chosen, will ask where they have to pay.
I can dream 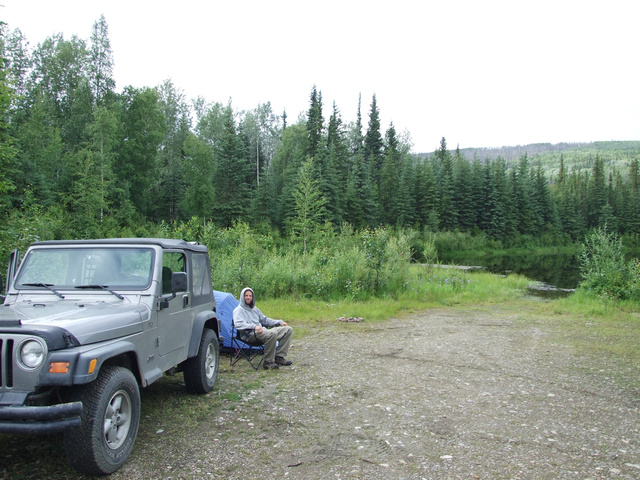 On the downside, camping like this means I don’t meet other travelers or even locals. In fact, I often don’t see anyone else at all. I’ve been doing it about 2 nights in 3, and I’m yet to find the balance of free vs. meeting other people to share the bears with.

I met George at Liard Hot Springs and after we’d chatted around for an hour or two he invited me to checkout his gold mining operation in Central, Alaska. The drive out was fantastic, over a mountain pass and down into a little town that time had forgotten. My instructions were to ask for directions to George’s mine at the one and only store in town. I wasn’t sure how well this was going to work, but sure enough, they immediately knew who I was talking about and gave me perfect directions. I found George happily working on one of his eight or nine strong fleet of barely running CAT heavy machinery. This early in the season all efforts were on getting everything running again, no gold was actually being mined yet. We chatted around for the entire day, while George showed me around, introduced me to everyone and working on the starting mechanism of one of the big CATs.
I had a great time out at the mine, and I really hope to see George again sometime down the road. 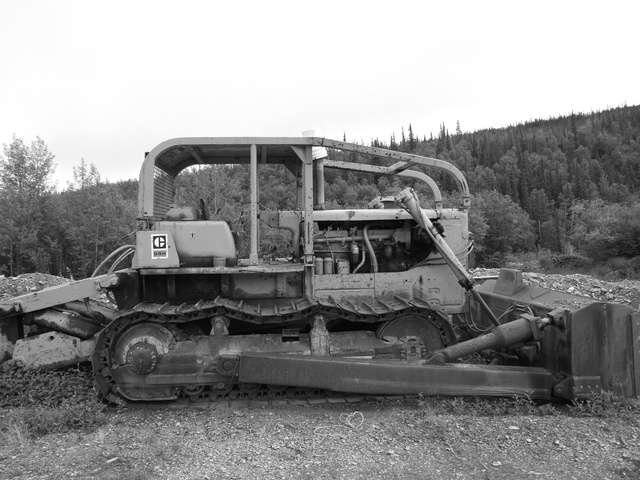 Crossing The Congo: Over Land And Water In A Hard Place
by Mike Martin, Chloe Baker, Charlie Hatch-Barnwell
From $29.95From CAD$39