Rigid A Series LED lights are great for the interior. From $click From CDN$178.71 on Amazon

The highway to Pointe-Noire winds it’s way up and over a genuine mountain pass – at times steep enough for 2nd gear in the Jeep. Technically the road is two lanes in each direction, though continual broken-down trucks and extremely slow vehicles make for some interesting hairpin corners. I see evidence of brake failure in multiple places where trucks have gone straight through sharp corners, either off the mountain edge, or straight into a wall of rock.
A local I spoke to said it used to take days slogging through the mud to drive what takes me hours.

Pointe-Noire itself is a massive city. Driving in I get stuck in a massive traffic jam in the slums and bustling street markets, where the pavement is cracked and broken and people wade through knee deep trash. As I get closer to the centre I am shocked to find a very modern city. There are glittery high-rises, supermarkets, cinemas and bowling alleys. When I squint my eyes I could easily be in a big city in Canada or the US.
I am completely shocked to see such a modern city – I had no idea Congo is like this.
Yet again Congo dishes out the unexpected.

I stop at the first gas station I see and again fill up to the brim, feeling happier there is gas here. I explain to the attendant there is not a drop in Brazzaville, to which he replies:
“Oh yeah, it was the same here last week. It might be the same again tomorrow”.
He does not seem phased in the least. 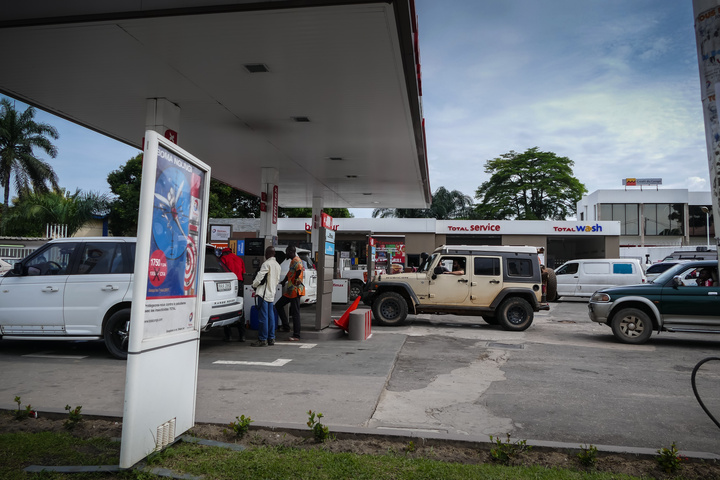 Waiting in line at a gas station

Through the Overland grapevine I have learned of a very friendly man named José, who runs a hole-in-the-wall bar/restaurant in the city. I have no trouble finding him – he is the larger than life character speaking a mile-a-minute with a huge grin permanently plastered on his face. José is originally from Portugal, and has spent decades living in the DRC, Congo and Angola. He is full of stories of adventure, and I continually encourage him to tell more.

José, the nicest man in the world

Because José speaks Portuguese, French, English and a couple of local languages, and because he is the friendliest and happiest person in the world, he is friends with basically everyone in town. Everyone that is, including the Angolan Ambassador. The Ambassador just happens to stop in at José’s bar every week or two for the Portuguese beer José proudly sells.

Over a couple of these delicious beers and fried chicken, we formulate a plan together. José obviously enjoys someone new to talk to and hearing stories of my adventure and so he is more than willing to help with my Angolan visa application. In the mean time he sets me up with a great place to camp on the beach. His buddy Pascal runs an enormous restaurant, and is happy for me to camp in the guarded parking lot. Pascal’s place defies belief, with seating for at least a couple of hundred people.

Pascal has also lived in Congo for decades – and loves it – though he talks about how it was so much better even just five years ago. The government is now strangling businesses, and the people have no money to spend. His place is obviously the ex-pat hangout of choice, and I soon meet stacks of foreigners living and working in and around Pointe-Noire. Many are in oil and gas, though there are plenty involved in every conceivable kind of business.
As if Pascal’s place is not already paradise – he sells wood fired pizzas. With real cheese!
Again, real cheese is something I have not even seen for many, many months. Congo is spoiling me. 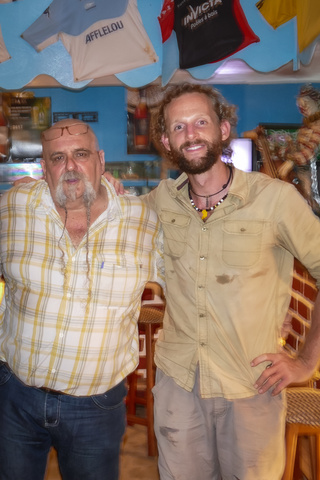 Pascal, the owner of the huge restaurant where I camped

The Embassy only accepts applications on one day of the week and the application will take at least a few days, so I settle into my beach-side camping.

I head over to José’s bar each night for cold beer and to here more of his amazing tales of exploring this part of the world. I especially love his stories about his days running a cargo boat upstream from Kinshasa in the DRC on the Congo River. Back in the day it was safer than Switzerland, he says.
He also flew planes in the Angolan civil war, which as you might guess, came with it’s fair share of misadventures. 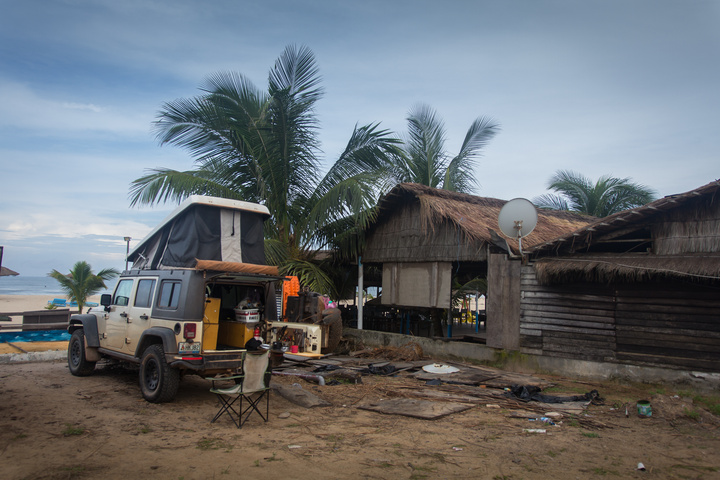 Fingers crossed I will soon get the last visa I need for the West Coast of Africa.

If not, well, I don’t know.
If possible, I would like to avoid driving across the DRC……