I previously had Malaria in Mali. You should read about that before reading the below.

Driving down out of the mountains one morning I start to feel a little strange. I am tired and vague, even though I have just eaten breakfast. It is almost as if I have had too much coffee, or have not eaten for a few meals. Nothing serious, but I can tell my usually dependable body is off. In agreement about a short day, we find a small clearing in the trees just off the road, and I immediately lie in the shade and do nothing.

A few hours later my symptoms begin to feel very familiar. I really don’t want them to, but they do. It is as if I have run two back to back marathons without eating anything – I am weak, shaking a little and feel very disconnected from my body. I can tell that if I went to the gym, I would be unable to lift the lightest weights on offer.
I tell my friends I think I have Malaria, and we discuss the options.

A few hours later I only feel worse, and so I take a Coartem tablet, the “cure” that worked wonders last time I had Malaria. Just like last time my head is a little loopy, and I say many strange things that are very much out of character. I am aware I am doing so, but do it anyway.
After barely eating, I put myself to bed early and struggle to find sleep. My head aches so much I can’t stand it touching the pillow. After finally sleeping I am happy to think the night must almost be over, so I check the time. It is 9:45pm. I am in for a long, long night.

I lie mostly awake until 2am when I take another tablet, and finally find sleep through the night.

In the morning, things do not improve.
At 10am I am sitting in full sun, wearing my big cold-weather down jacket and I begin to shiver uncontrollably. I feel utterly terrible. This is not good.

Happily, all the way back in Cameroon I planned for this outcome. Knowing I would be many months in the remote jungles of West Africa, I bought the inject-able “cure” for Malaria, called Artemether. This is more-or-less a much more potent form of the tablets I have been taking, and it is what would be injected if I got myself to a clinic. 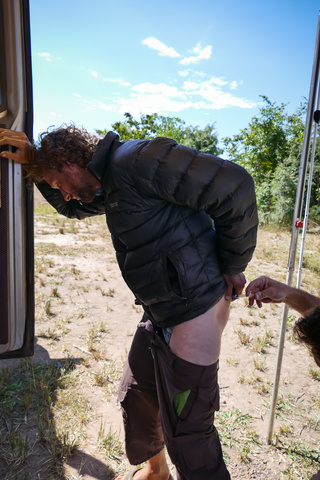 Getting worse by the minute, I ask my friends for help, and so after some laughter and even a smile from me, they inject the drug into my backside. I have to wonder what decisions I made wrong in my life to be getting an injection from a mechanic on the side of the road in Angola.

For two days straight I lie in the shade and sleep in fits and spurts. My head pounds, and I feel too weak to eat, walk, or even move. At night the pain in my head only increases, and I barely sleep at all, constantly kneeling in an attempt to get my head off the pillow, which seems to be made of solid rock. Each morning and night we inject more medicine, and I also finish off the Coartem tablets I began.

Finally, one morning I feel much improved, and even eat some breakfast. An hour later I make the call to move on. I carefully drive to a bigger city on the coast, and after much difficulty in Portuguese I miraculously locate a clinic where a single doctor speaks Spanish. To compound my Malaria problems (confirmed by a test), I have been having stomach issues for a while, and my skin has recently broken out in huge red welts in an ever-increasing number of places, mostly on my arms and legs.

The doctor ignores my utter lack of red blood cells – which have been eaten by the malaria – and moves on to the other matters. After a visit to a pharmacy I begin taking 12 tablets three times per day, and continue the twice daily injections.
I feel like a walking illness.

Thankfully, we find a great place to camp on the side of a restaurant, and I set about resting and recuperating.
A couple of days later I feel almost back to normal, and two more days later I am good again.

I really, really hope there is no round three when it comes to Malaria.

I absolutely love my Canon 60D DSLR - for stills and video. From $238 on Amazon