I installed a couple of Blue Sea Dual USB Sockets in the Jeep to easily charge gear. From $17.37 From CDN$33.77 on Amazon

Long time readers of The Road Chose Me will remember my “Jeep Stuff” posts from my Alaska->Argentina expedition.
The Jeepers among you will be happy to hear they’re back!
Each time I work on the Jeep or have something to report, I’ll do a write up, just like last time.

So, I’ve laid down 6,000 miles (10,000 kms) through six countries in around six months, moving down the West Coast of Africa. Looking at the big picture, I’m moving at about the right pace (around one month per country), and the Jeep has done great. I am extremely, extremely pleased with all of my “living” modifications – the water setup, fridge and solar are so good it’s difficult to describe. The Jeep itself is also great, handling everything I have thrown at it.
I got it stuck in soft mud once, though once I turned on the rear locker I was able to get out with a minimum of fuss. 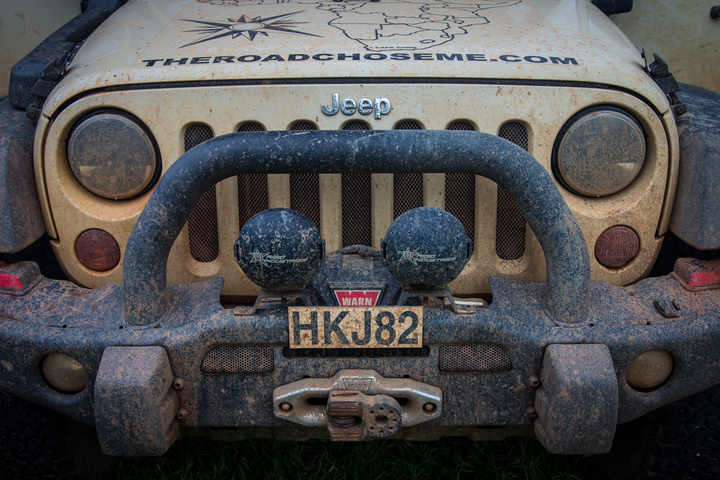 For a number of reasons, I anticipate it’s likely I will have more trouble with this Jeep than the TJ Wrangler I drove from AK->Argentina. Also because I had absolutely zero problems with the TJ, that’s setting the bar pretty high! Partly because of that, and partly because it’s just my nature, I watch the temperature gauge like a hawk while driving, and do a thorough inspection under the hood at each gas fill-up.
I also drive with a lot of mechanical sympathy – a.k.a. I drive like a Grandma while on expedition.

So, in random order, my thoughts are:

Of course, I knew all of this before starting on this expedition, so it’s in no way a change of plans.

Given all of that, it was recently time for a round of maintenance, and I took that chance to perform repairs and a couple of upgrades which I think will help greatly.

To read all the details of that work, see my article in the latest FREE edition of JPFreek Adventure Magazine

First Overland: London-singapore By Land Rover
by Tim Slessor
From $15

A Painless Wiring dual battery isolator means I'll never be stuck with a dead battery. From $173.14 From CDN$247.42 on Amazon