We make an afternoon out of re-supplying in El Rosario with only the bare essentials; street meat consisting of burritos & tortas, groceries & gas. I’m not sure if it’s my dreadlocks or Duke’s long blonde hair, but a couple of kids at the restaurant think we are hilarious and don’t stop laughing the entire time. I’m getting much more comfortable and am starting to notice subtle things about my surroundings; most buildings have electricity & running water, Highway one is as good as any two lane highway I have driven & the vast majority of people don’t care about us at all or think we are pretty funny.

The Sea Of Cortez

We take a detour off Highway One and roam across to Bahia De Los Angeles, to see the Gulf of California aka The Sea of Cortez. The town is pretty small with only a handful of restaurants and hotels, so we drive 11km of extremely rutted gravel road around to Punta La Gringo. We find a beautiful little spot overlooking all the nearby islands where we swim and enjoy the 35 degree sun.

An island in the Sea Of Cortez

Back at the junction with Highway One we see two guys on heavily loaded bicycles and stop to chat.
“Where are you guys headed” I ask.
“Argentina” they both reply, grinning from ear to ear.
We quickly figure out they started in Prudhoe Bay, Alaska just before I was there. In fact, I probably passed them on the Dalton Highway just North of Fairbanks. We also have the same destination in mind, Tierra Del Fuego. We decide to camp together and find a great spot out of sight, off the highway. The four of us laugh and chat while cooking on our little camp stoves, throughly enjoying all the tales of adventure. 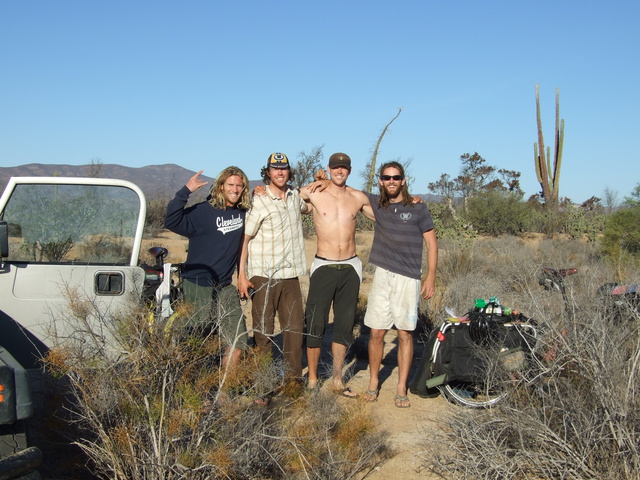 Seth & Parker have a similar plan to me, which is to say no real plan. They are also blogging about their adventure and you can read along at www.pebblepedalers.com 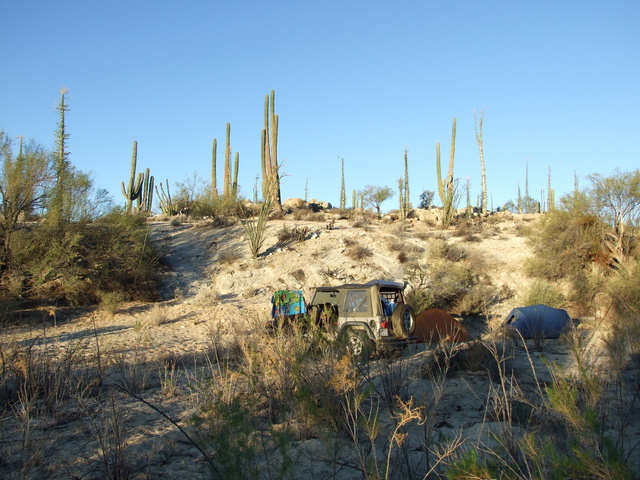 Camping in the desert was great & really cold at night

Duke and I continue on to Gurrero Negro, on the border between Baja California North and South. We go through an immigration stop here and I pay ten pesos (less than $1USD) to have the Jeep ‘washed’ for fruit fly. This consists of driving over a sprinkler that coats the underside with some un-known substance. In the office we clear customs, get a non-descript stamp in our passports and move on to the bank to pay 262 pesos ($20USD) for the privilege. The banks so far have been clean, organized & friendly – figuring out my debit card adds to my liking of them.
It’s nice to have my paperwork out of the way, and I will sort out the Jeep in La Paz before jumping the ferry to the mainland. 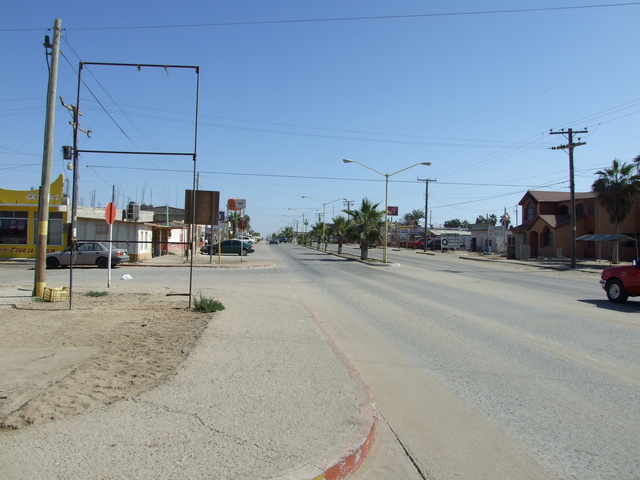 The main street of Gurrero Negro

Each town we have passed through has a good grocery store, an internet cafe & a place to purchase purified drinking water. We take advantage of all three, paying a few pesos for internet and 28 to fill our two massive water jugs. Street meat is again a priority before Duke splashes on some running shoes for all of $23USD. 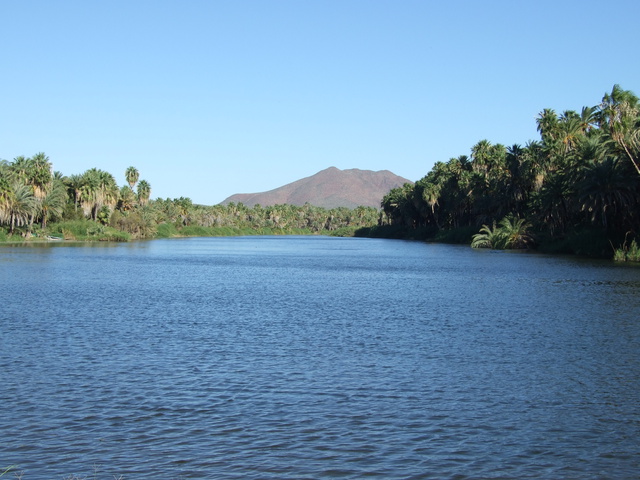 A river running through San Ignacio, making an oasis

We camp on a secluded little beach for the night, where the water and breeze blowing off The Sea of Cortez are quite warm for the first time. It’s beginning to sink in that I’ve succeeded in skipping winter – it’s only going to get warmer for the next few months for me now

Jeep tracks on the beach