I drive south to San Diego where I meet my good buddy, Duke. We’re friends from a long time ago and have been trying to meet up on this adventure of mine since Wyoming. Duke’s been looking for a way to hop down Baja California for about a month now, so teaming up is obvious. We spend a day in San Diego soaking in the sun and organizing last minute details.

Around midday the following day we drive south on Interstate 5 until it ends, literally in Mexico. I’ve apparently driven in the wrong lane as the border guard asks a random person to translate, and directs me across four lanes of moving traffic into the ‘declaration’ lane. The once again spanish-speaking-only guard there wants to see in the back of the Jeep and barely pokes his nose in before he declares it’s all fine.
Twice he asks me “One?” before I realize he wants to know if I am driving down highway one & therefore Baja California. “Si.” I reply, “é Mazatlán.”
Going to Mazatlán on the mainland means I have to get myself a ‘tourist visa’ and the equivalent for the Jeep.
Using the three words of spanish I’ve been practicing for the last week I ask where to find immigration for the Jeep and I.

We park off to the side and find the right ‘building’ for immigration services. The officer explains in broken english that we have to walk 2 blocks to a building that can take care of all the required paperwork. We walk off only to find he means us to walk through the turnstiles into Tijuana proper and stumble around the streets there. Our choices are to leave the Jeep where it is or drive it into Tijuana and deal with whatever comes. I’ve been to TJ a couple of times before and have no intention of spending time there now, especially while carrying all my important paperwork & thinking about how safe the Jeep (is not).

We decide to scrap the whole paperwork-at-the-border plan, delaying it all until we reach the bottom of Baja.

I’m extremely thankful to have a navigator as we follow the winding roads out of Tijuana, always on the lookout for elusive signs to Ensenada and highway 1D. I can’t take my eyes off the road for long, but what I do see brings back waves of memories – decrepit buildings on all sides, desolate people staring blank eyed into nothingness and abundant garbage and filth. The smells come now in full force – first a rotting dead animal, then the most powerful sewage I’ve ever experienced, and wave after wave of rotting fish. Combine all of this with a low-hanging fog/cloud/smog mix that makes the air taste, smell and look horrendous.
It’s quite literally another world from sunny San Diego & we both fall silent, trying to take it all in.

I’ve been told time and time again most of the problem areas in Mexico are close to the border, so it’s been my plan all along to put in a good day of driving and get as far south as possible. When we hit the first toll booth, we figure out that Highway 1D is a toll road and we pay USD$2 quite a few times on our way to Ensenada, which turns out to be a very big place. It’s a little surreal to drive down a road and see a shopping district complete with a Walmart Supercenter, McDonalds, Burger King, Scotia Bank, Home Depot, etc. When I squint my eyes here, I could easily be in a strange part of the US or Canada.
With that thought on the font of my mind a few block later, the shops give way to all out poverty once again. 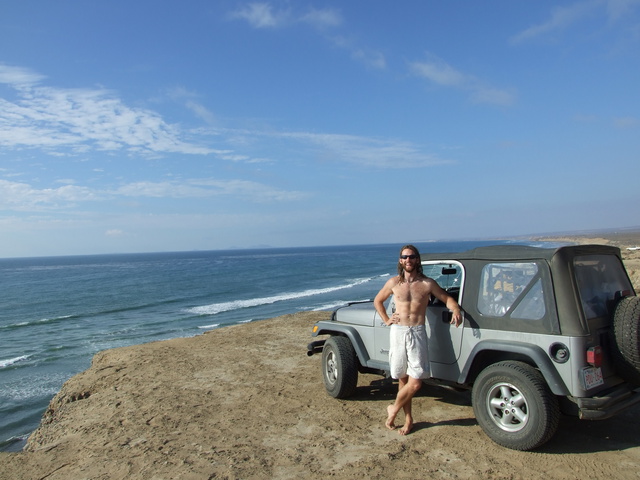 Dan on the Pacific Ocean in Mexico

The advice given to me was to think of roads not as a place for cars to move swiftly and safely, but more as a place where anything and everything will happen and cars have to deal with it. In the first few hours I encounter pot holes the size of my tires, construction that makes the surface so bad the Jeep is working hard, every kind of animal I can think of, numerous speed humps that are not signed and of course Duke’s favourite – the Police.

The Police and military in Mexico apparently don’t mess around and about every 30km we pass through a roadblock, manned by guys in full combat gear holding fully automatic weapons at the ready. Conversation with the guards is difficult & they seem more amused by us than anything else. Each time we are waived through without much of an inspection. 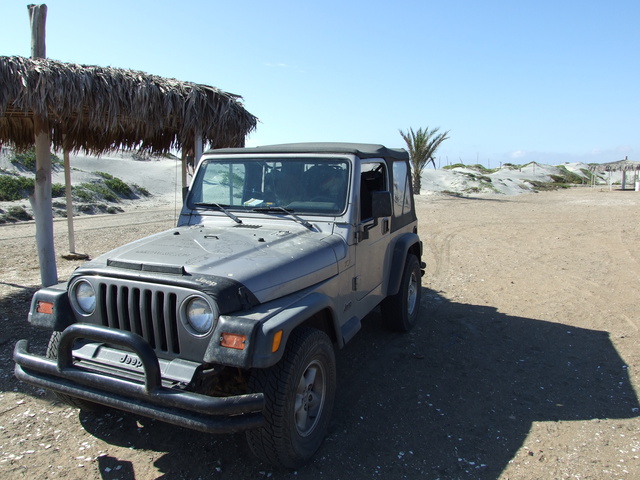 The Jeep in Mexico

After months and months of planning, I’m actually in Mexico, driving down that strip of land I’ve been pointing to on my hood for the last four months.
The road chose me.

Using a 7 circuit fuse block from Painless Wiring made adding fused circuits to my Jeep easy. From $95.99 From CDN$144.34 on Amazon