We roll into Belize City and quickly find that everything we were told is more or less true – it’s not a very nice place to be, with lots of crime and very dirty rundown streets. The major roads have bigger cracks and potholes than most gravel roads I’ve driven on and are strictly a first gear affair. We stumble across a cheapish hotel that will let me lock up the Jeep for the night and Kate puts herself to bed feeling sick while I head out for Jeep repairs.

The zips on the rear window of the soft top have been acting up since I hit major dirt & mud in Alaska and I’ve been ignoring it as much as possible, kind of pretending it’s not there and hoping it would just go away. Yesterday one side gave out completely, not closing at all and jamming badly no matter how hard I tried to make it work. A close inspection shows both sides are worn down to the point of looking like flat plastic instead of zipper teeth.

The phone book yields only one auto upholsterer, so I set out in the pouring rain trying to navigate the city with a cheesy tourist map that has pretty pictures of animals and a smiling sun in the top corner. I quickly figure out that everyone in the shop is a Jeep enthusiast (Jeeper) and everybody either owns one, or has done at some point. The main guy has replaced many such problem zips and assures me he can have it as good as new. I shoot out quickly to buy the actual zip needed and upon my return the guys move all the furniture out of the showroom and I drive right up in there to escape the still pouring rain. 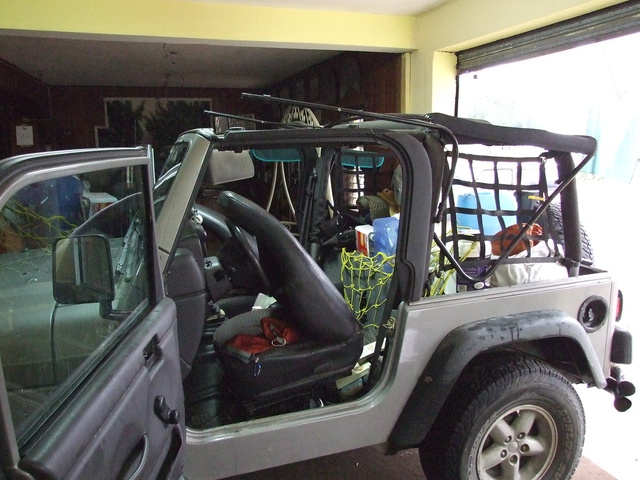 The Jeep all naked

In five minutes flat I have the entire roof off which disappears out the back to be repaired. I take the opportunity to clean and re-organize while it’s so easy to reach inside and move everything about. Everyone in the shop is really excited to hear about my trip and can’t stop admiring the map on the hood. I take out my paint and update my moving yellow line and they almost fall over to see my just painting it like that

The new zip doesn’t take long to install and we put everything back together in no time. It’s a very heavy duty zip which doesn’t go around the corners so well, but the guy assures me it won’t give any trouble for at least ten years and my assessment is that it’s about ten thousand times better than a zip that doesn’t close. All up it costs me about $75 USD and I’m really happy to have everything working 100% again. While we’re on the topic of Jeep repairs I forgot to mention a week back one headlight went out, so I changed it with my spare and bought a new one that same day.

The city itself is not very nice and we almost feel like prisoners in our hotel, hiding from the bad guys on the outside of the impressively tall perpetually locked gate. My advice to anyone coming to Belize is to give the city a miss, there really is no reason at all to come here.

We Will Be Free: Overlanding In Africa And Around Sout...
by Mr Graeme Robert Bell
From $20From CAD$26.19

Vehicle-dependent Expedition Guide
by Tom Sheppard
From $136.99From CAD$189.31 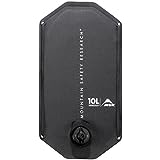