Brett and I had been throwing around a bunch of different ideas for the major adventure we should undertake together. Originally it was a multi-day hike into the very remote Deer River Hot Springs – the whole reason I met Brett in the first place. We also threw around the idea of trying to find McArthur Hot Springs – another extremely remote one that almost nobody has even been to, including Brett. We quickly agreed we should go somewhere Brett has never been, and then decided to do an activity that I don’t normally have access to – whitewater canoeing.

For some extra entertainment and paddling experience Brett invited his good friend Bill to be the third member of the trip. The basic plan was to paddle down the Lower Wheaton River to Bennett Lake and explore the lake and surrounds for a few days. Nobody we knew had paddled the lower river before, although we did hear a report from a group that took five days just to get down the river, making us suspect the river would be tough & slow going.

To confirm this suspicion, from the get-go we were ‘lining’ the canoe – walking along the bank holding onto the bow and stern lines to keep it under control as it moved down the current. The water was extremely silty from the glacier melt, which made it very difficult to see underwater hazards. A few corners later we were able to pile into the canoe and paddle away, constantly on the lookout for hazards and always using the calm eddies to re-evaluate our position. Before the trip we talked a lot about how we wanted to be very controlled and cautious – we were not interested in going around any corners blind.

As we progressed down the whitewater, we were most concerned about two major kinds of hazards:

Dan in front of a nasty sweeper

The first day involved paddling a few hundred meters then “eddying out” in safer calm water. Once safely in the eddy we all piled out and walked downstream until we had a really good view of what was coming next. Sometimes we would see everything was clear and paddle down to the next eddy and sometimes we would find a river-wide sweeper, which we would line the canoe down. The sun beamed down all day and it was over 30 degrees – we all grinned from ear to ear as we made our way down enjoying the river and everything surrounding it. Brett enjoyed commenting that it was “a busy weekend” and how the place was “too crowded” – of course, we didn’t see another person.

Friendly porcupine that wandered into camp

We came across a couple of oddities as we made our way; the board from a wind surfer that was a little worse for wear, a dead moose calf that had apparently drowned not long ago and the front meter of a canoe smashed around a tree. Seeing the remains of the canoe was an excellent reminder of why we were being so cautious and we were all proud of how well we were keeping it under control. 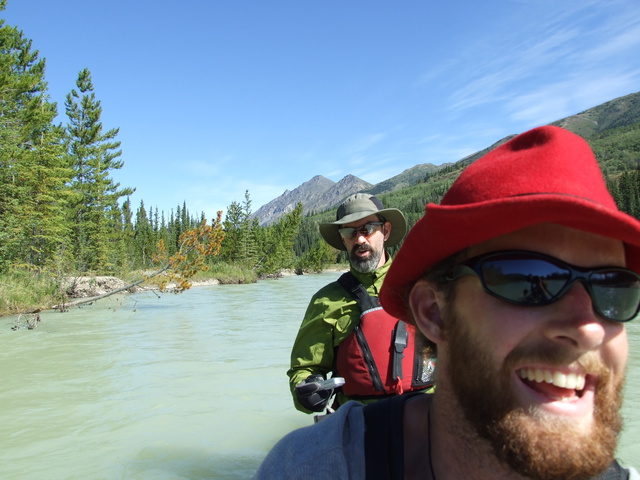 Dan and Brett loving the river

We chose a sand bank from the one of the three thousand vacant spots and set up camp for the night. Brett and Eva like to eat well on their out-trips so there were no dehydrated meals on this trip – fresh pasta sauce, sausages, cheese, bread, oats with 10 all-organic grains added and everything else tasty and healthy you can imagine. We ate like kings. 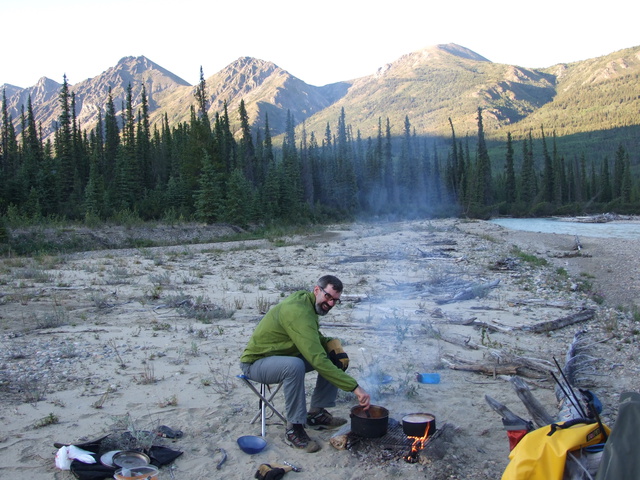 Bill chose to sleep in his “tripping hammock” – a beefy hammock with a bug net, rain fly and very complicated system of ropes for setting it all up. Much hilarity ensued when he wound up lying on the ground on the first few attempts then uprooted a couple of poor little trees that weren’t up to the task.
Brett affectionately nicknamed it the “Bear Burrito” and we both broke down in fits of laughter whenever Bill tried to get in or out of it 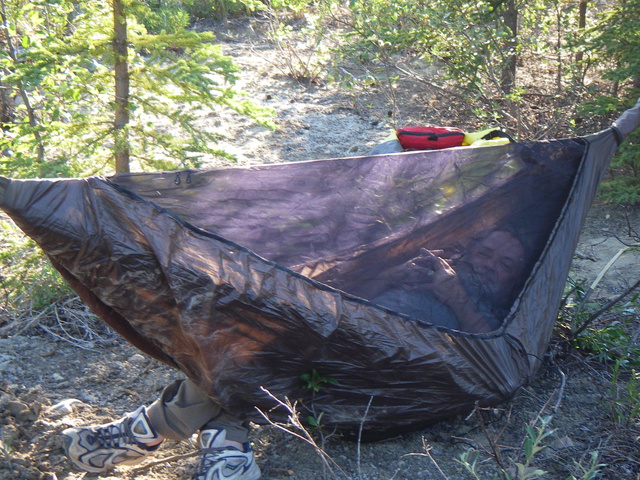 Bill in his bear burrito

The next morning we moved further down the river again in the beaming hot sunshine. The river became wider and mellower and we made good time all the way to the mouth at Bennett Lake. Looking out over the lake we were all certain it was the ocean, a four foot swell was rolling in with whitecaps adding menacing touch. The lake water is only a few degrees and Brett explained that rivers don’t often kill people in the Yukon, lakes do. On a nice calm day people happily paddle out into the middle of a lake to cross. The weather changes quickly and whips up waves that capsize the unsuspecting paddlers. With the water temperature so low, the body draws in blood from the limbs to keep the core warm, arms and legs quickly stiffen up and people drown very very quickly without even being aware the lakes are dangerous. 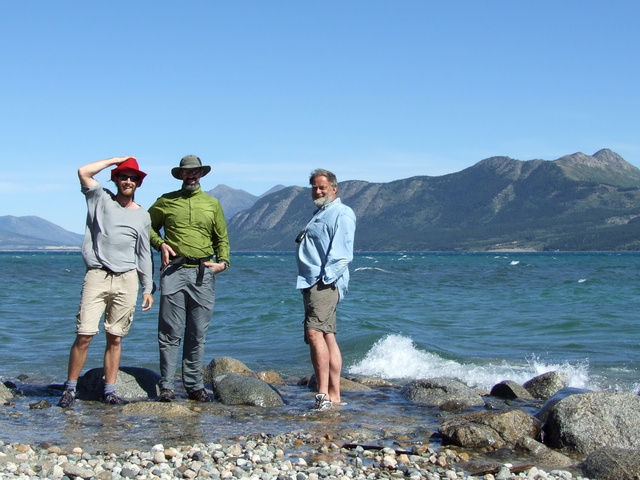 Later in the afternoon when the waves were even bigger, Brett and I unloaded the canoe and paddled out for some surfing fun. This involved paddling out directly into the waves, which was tricky to manage from the bow because the waves were so big my paddle often didn’t reach the water. Once we were out a good way, we would turn the canoe as fast as possible and paddle like made to catch a wave. I’ve never surfed in a canoe before and it was just as much fun as it sounds. Staying close to shore meant we could just swim in if we got in any trouble, but that wasn’t needed. 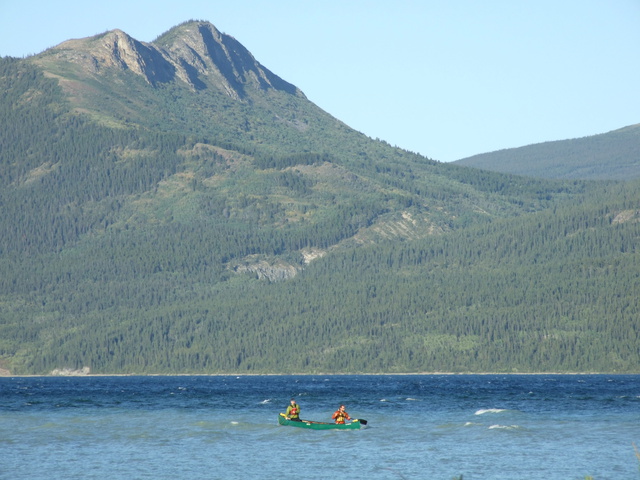 Dan and Brett surfing the waves

There is a lot more to come on this trip…..

(A lot of the photos posted here were taken by Brett, all credit to him.)

All my gear is stored inside durable Pelican Cases. From $click on Amazon

I use a Mr. Funnel Gasoline/Water Seperator when buying from a questionable source. From $35.18 From CDN$55.53 on Amazon