My Bolt padlock is extremely convenient becuase it uses the Jeep ignition key. From $26.99 From CDN$48 on Amazon

Where The Icebergs Roam

The whole time I’ve been in Alaska I’ve wanted to do something that really can only be done in Alaska – something that will leave a big impression and I’ll remember for a long time. I can’t think of anything that fits that description better than kayaking around icebergs. It was a big chunk of money to drop, but man it was worth it.

At eight in the morning four of us met our guide Jay and jumped in a water taxi for an hour and a half ride out to Columbia Glacier. We passed pretty close to Bligh Reef, the infamous spot where the Exxon Valdez ran aground in 1989 spilling 11 million gallons of crude oil into the pristine waters of Prince William Sound. There are many mixed reports about the on-going effects of the spill, with all the studies funded by the oil companies finding everything A-OK and all the studies funded by other interests finding endless problems.
Locals told me that on a lot of the near-by islands you only need to dig about 3 feet into the beach sand before you strike oil.
Ouch.
A few days after the tanker started spilling oil, a storm whipped up and pulled the oil out, away from the port of Valdez and a couple of the surrounding fiords so the area we were paddling in was not affected.

We unloaded our kayaks and gear and set out for the day – initially we paddled around looking at wildlife and the amazing coast-line. We spotted eagles, sea otters and sea lions but this was just the lead up to the main event. 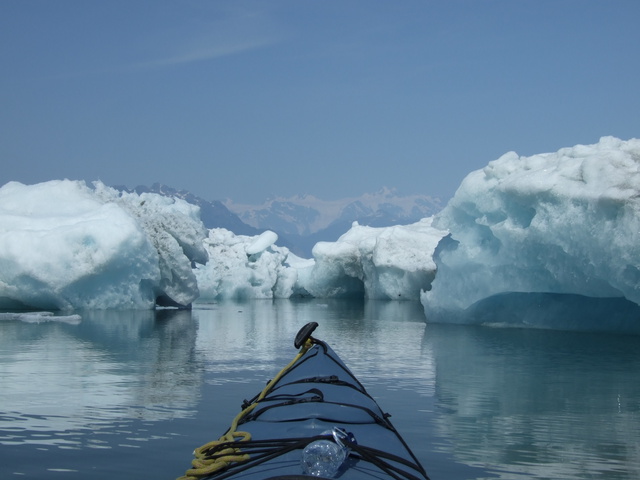 Heading into the ice field

Before entering the ice field, Jay pulled us into a group and gave a safety talk about paddling around the ‘bergs. Right in the middle of his talk, a microwave-size piece of ice broke off a ‘berg, at first with startlingly loud crack, and then extremely loud crashing and smashing as it tumbled down into the water. These sounds of destruction continued to reverberate around for several seconds, at first off all the ice and water and then in our heads.
“Right” said Jay, “That’s what we’re trying to avoid”. 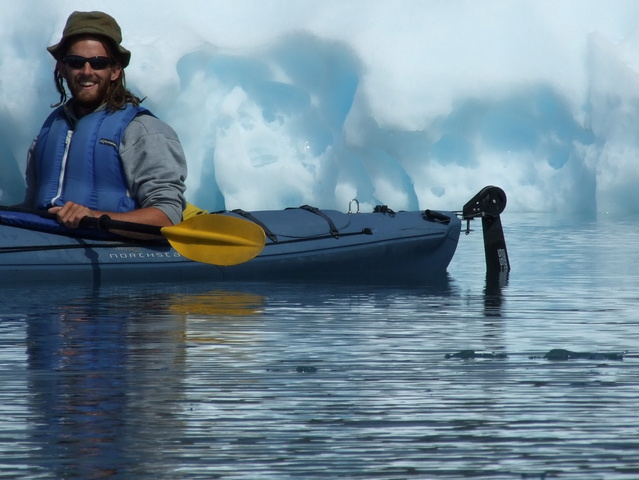 Dan Kayaking in the ice field

Paddling in and around the ‘bergs was a unique blend of peacefulness and intensity all at the same time. Sometimes I sat silently on the glassy water just listening to the constant dripping and far off cracking and smashing. Then other times a ‘berg the size of a VW Beetle would zoom past right next to me, propelled by some unseen current. It was all we could do to stay out of the way.

Jay in the ice bergs

A couple of times we had to “shoot the gap” which means straight lining a narrow gap between two chunks of ice – with no other choice we had to get closer than was comfortable. These were my favorite times because it meant I could get extremely close to the biggest ‘bergs and have a really good look at the surface and how big it was underwater.

Each ‘berg was amazingly unique in it’s size, shape and makeup. Some were meters thick and perfectly clear just like an ice cube from the freezer. Others shone brilliant shades of blue when the sun hit them and others seemed to be more dirt and rock than ice. Jay explained these were the pieces of the glacier closest to the edges. The ice there is jammed against the rock with such force that it tears into it and drags it down the mountain – a kind of accelerated super-slow motion erosion. Because these ‘bergs were much darker in color they were melting at a much faster rate than the others. 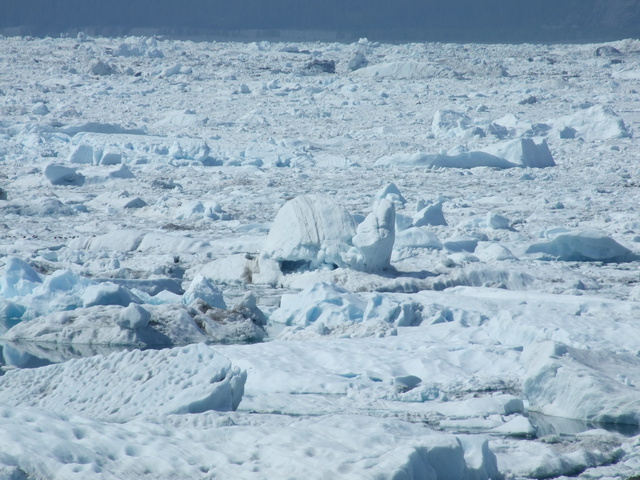 A chunk we called The Snail

We stopped for lunch and hiked up to high ground to get a better view of the ice field we were in. In the photo below, behind me you can see Columbia Glacier winding down the mountains, ending with a vertical face where the ice breaks off into the ocean. That vertical face is over 120 meters high and over 14kms away – absolutely astounding and impossible to judge as there was nothing around to give perspective. 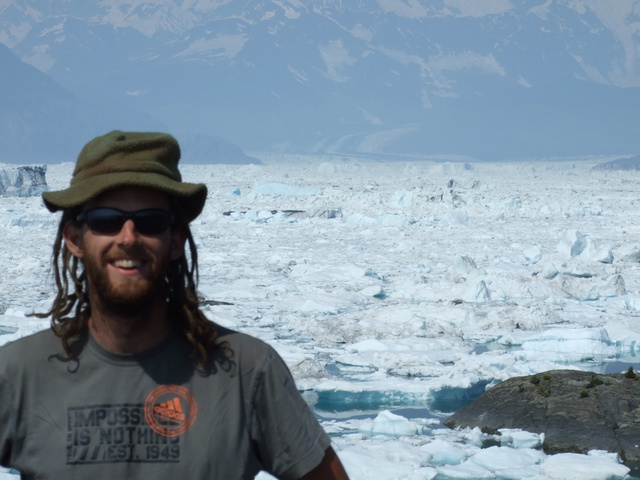 Columbia Glacier and ice field behind me

The tide was rising during our lunch break and things had changed dramatically when we were back in the thick of things. Icebergs that were previously the size of a house were now only small cars. Everything was moving faster and seemingly more randomly than before, pushed around by the moving tides. It was really cool to get such an example of the old ‘tip of the iceberg’ saying, with my estimates putting it AT LEAST 90% underwater. 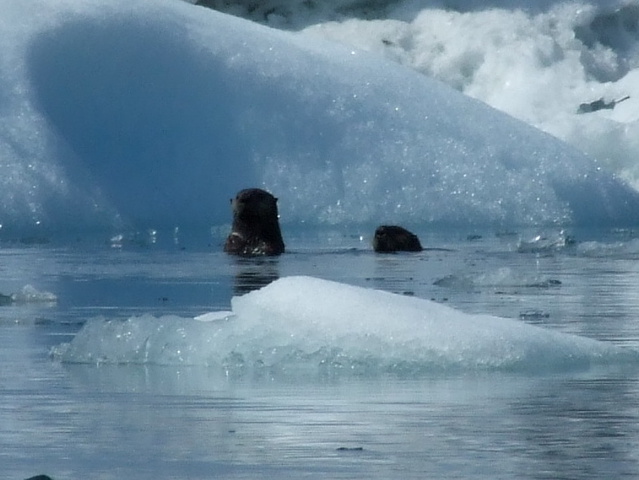 When it was time to leave I really didn’t want to go – I could have happily paddled around for hours and hours watching and listening. The experience was really full on and unforgettable. 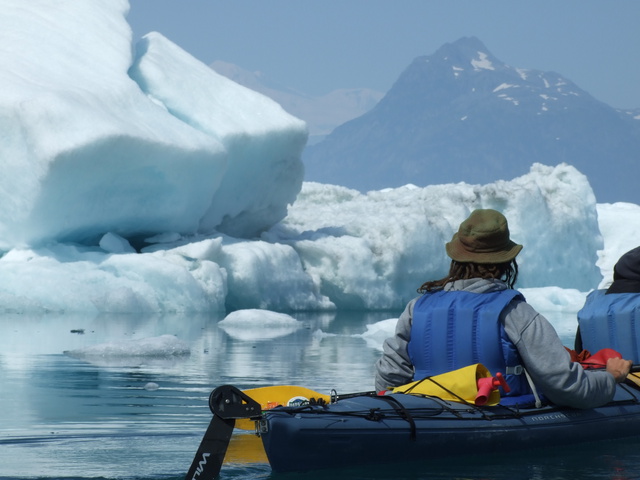 Vehicle-dependent Expedition Guide
by Tom Sheppard
From $45From CAD$144.83

My Bolt 6' Cable Lock keeps everything on my rear bumper safe using the Jeep ignition key. From $29.24 From CDN$51.99 on Amazon