The Duke and Danno Show

I hadn’t seen Duke in about two and a half years, since I last visited him in New Hampshire. We first met about four or five years ago when we sat on the same chairlift at the resort I was working at, Kirkwood in California. After a week of riding, drinking and general trouble making it was pretty much a given we would catch up down the road. Somewhere and sometime.

Fast forward to last Monday, Duke calls me up, says he’s on a road trip and will be in Banff tonight. Tonight. In Banff. An hour away. I raced out there as soon as I could, grinning the whole way.

Sitting on a bench waiting for him I was a little worried I wouldn’t recognize him, or we wouldn’t be friends anymore or… bah – what crap. The second I saw him I knew it was on again. It was pretty damn obvious he’d been on a roadie for a month and man was I jealous – he’d just driven his $800 truck from Jackson Hole, Wyoming over to Portland, then up through Washington to Whistler. From there he drove East through central BC, Revelstoke and now Banff. Living out of his truck the whole time with his dog Simba added a lot of character to the trip.

We both had so much to say and were smiling from ear to ear the entire night of bar hopping around Banff. Not wanting to pay for a place to crash we found ourselves a quiet spot up behind Banff where I crashed in a tent and Duke and Simba in his truck.
Man that was a fun night.

Over the next five days we didn’t stop. A round of disc at the Canmore course was awesome, followed by hiking up Heart Mountain. It was just a little windy (read insanely) and snowing pretty hard at the top but we loved it all the same. We bypassed the fence at Park 96, Calgary’s private disc golf course for a sweet round with a local character who just a month earlier had quite accidentally dropped a cliff at Lake Louise to the tune of a severely broken arm and leg. He was super proud to tell us he was now a celebrity around those parts, as he had skied down by himself to ski patrol. It was great to see him out so soon.

Every night of the week found us at a different bar, chatting it up with a different group of random people. Papa Roach are my favourite band and they were in town on Thursday night, which Duke knew we had to get to. A few beers down we arrived just in time to watch everyone stream out – not that it mattered, there were plenty of bars on 17th that had cold beer for us. Every day at work was a gong show, which led to a couple of choice quotes. A friend at work was commenting; “Dan’s been looking a little frazzled these last couple of days” and by Duke seeing me on Thursday afternoon: “You’re going home for a nap before we go out again”.  Haha.

It was an awesome week of laughing and smiling – which only made us want to catch up sooner rather than later.

Duke’s summary was pretty fitting: “Danno, there’s no way we could live together. Within a week one of us would have alcohol poising and the other would be in jail”. Sounds like fun to me. 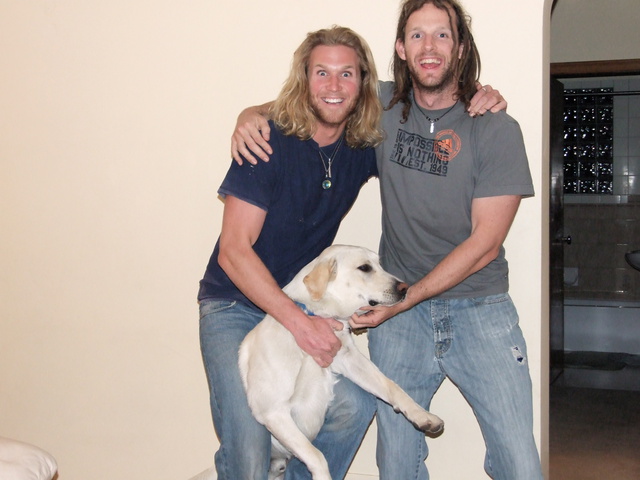 Crossing The Congo: Over Land And Water In A Hard Place
by Mike Martin, Chloe Baker, Charlie Hatch-Barnwell
From $29.95From CAD$39

Scene LED lights from Rigid are great to light up outside the Jeep when camping. From $109.99 From CDN$130.45 on Amazon