I have two 100W Renogy Solar Eclipse Panels mounted on the roof. From $click From CDN$179.99 on Amazon

I finished my storage box for my TJ this weekend and I wanted to share. The box means I can leave my tools and camping gear in the back, even when the soft top is down, without any fear of it being stolen.
The basic idea was a piece of plywood sitting on the wheel wells and butting up to the tailgate when it was closed and locked. Behind the seats would be a vertical piece of plywood to finish off the “box”. I thought about raising the box up off the wheel wells to get more height, but that would interfere with the soft top bows when folded down and make it weaker because it wouldn’t have as much to rest on.
Below is the completed box, the plans are at the end of this post. 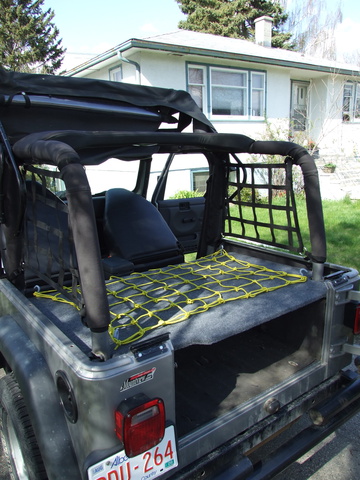 I originally wanted to use MDF, but a lot of people said plywood would stand up to water better and my local store had it in 3/4 inch (19mm), so I went with plywood. I was hoping it would be strong enough to hold my weight without any kind of support in the middle which it turned out to be. It does flex a little when I bounce my weight right on the leading edge, but I don’t think there is any danger of it cracking.

Mike and I cut out the top piece first, only needing the small cutouts for the roll bar on each side before it would fit nicely. Once it was in place, we made a template for the tailgate cutout and a quick pass with the jigsaw had the tailgate closing nicely.

Mike showing off his construction skills

Next was the vertical back wall. It was tricky to get just right, so I spent about an hour making cardboard cut outs for each side where it needed to tightly fit the wheel wells – each side was a little different. I also chose to mount the back wall just behind the “dip” in the floor for the rear footwells – I played around with this for a while and decided it was as big as I could get the box while still being able to recline the two front seats a usable amount. I really wanted the box to be secured from the inside to make it harder to remove or get into so I used the original mount points from the backseat to bolt that piece in place.Cutting off the extra length in the bolts meant I lost only the nut width in storage depth.

Rear wall secured from the inside

After we screwed the top piece down to the back wall using glue and about 15 wood screws, we thought for a while about how to really secure it down. We found a hole and mounting bolt left over from the seat belts in the perfect spot on each side. Another right angled bracket on each side gave it a lot of strength so it couldn’t be lifted up and off. The brackets slid in behind the carpet, so it’s a little hard to see in the photos. Again I cut off the extra length in the bolts to minimize the amount of storage space lost. 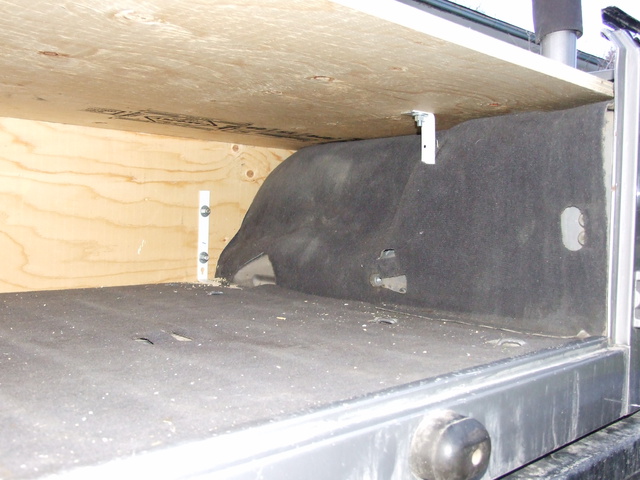 I covered the box in carpet in the hope it will be a little stealth – hopefully most people won’t even know what’s going on with the floor in my Jeep. I also mounted my three extra 12v outlets behind the passenger seat and threw some big hooks on top for a cargo net. I had to be careful where I put the hooks so they would not interfere with the soft top bows or the canvas of the top when it was folded down. 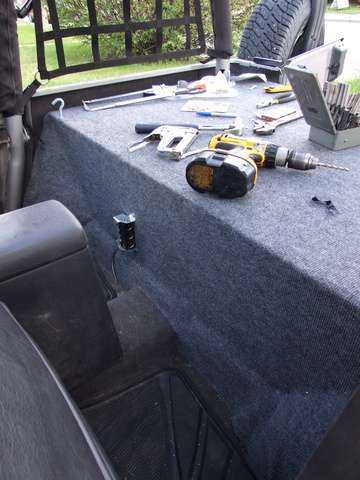 I’m very happy with the result and already have it full of gear.

The completed box from the passenger seat 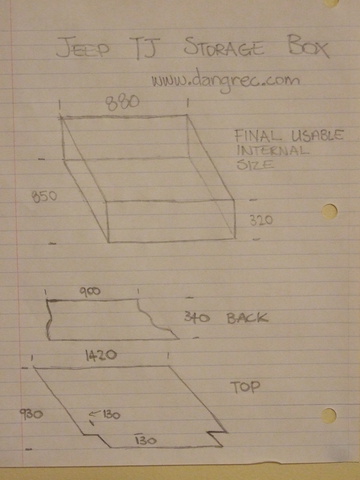 Crossing The Congo: Over Land And Water In A Hard Place
by Mike Martin, Chloe Baker, Charlie Hatch-Barnwell
From $31.2From CAD$40.61