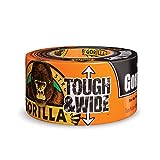 Carrying a library of books is impractical, so I have a Kindle e-reader. From $42.99 on Amazon

Evidence of the Klondike Gold Rush that swept through Alaska and the Yukon has been visible in every direction across the north. No image captures the hardships the stampeders endured better than that of hundreds of weary people in a seemingly endless line carrying back-breaking loads over Chilkoot Pass.
In the winter of 1897/8 100,000 hopeful souls off-loaded their worldly possessions in Dyea or Skagway Alaska and proceeded to trek the Chilkoot Trail – I hoped to follow in their footsteps. 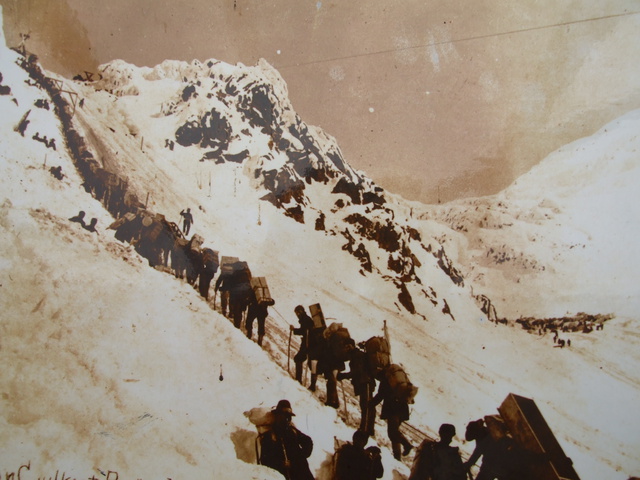 Back in the day

Saturday morning I picked up my $53 USD permit and set out aiming for Sheep Camp, 11.8 miles (18.9kms) from the trailhead. The trail is initially costal rainforest winding it’s way up and down beside the Taiya river.  The Chilkoot has been used for around 700 years by the Tlingit Indians who gathered natural resources from the coast and packed it into the interior to trade with the indians there. About 8 miles (12.8kms) down the trail I arrived at Canyon City ruins, all that remains of a once bustling tent city that at one point had a population of 4,000. 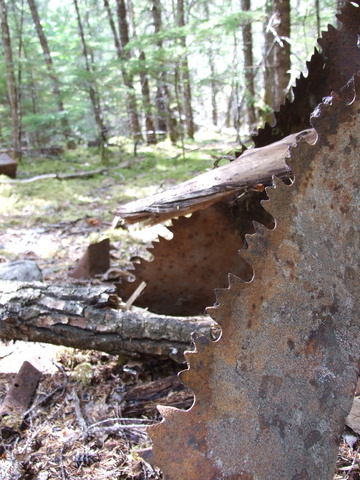 Wandering around in the woods I found countless rusty tins, tools, broken glass and rotting building foundations – items all discarded when the city disappeared in less than a year.

There were a few of these suspension bridges

During the day I had been overtaking groups of hikers and it was slowly dawning on me just how popular the trail really is. When I arrived at Sheep Camp there were at least 30 people milling about the campsite – chatting, resting and cooking dinner. This is a very popular campsite as it’s the last on the US side and the best staging point for a push to the summit the following day. During the early stages of the stampede the Canadian Mounties (police) quickly realized the stampeders were completely unprepared for the hardships they would face in the Yukon – many had almost no gear and certainly no clue about wilderness travel and survival. The Mounties decided that each stampeder must have with him one ton of gear – enough to last a year in the Yukon. They chose a year as the time period because they figured it would take most people six months to give up, and six months to get back. Check the wikipedia article to see what was included in the ton of gear.

We had been warned that the following 8.7 mile (14.1km) day was a tough one and we should get moving early – on the trail no later than 6am we were told. Checkout the elevation profile of the trail to see how steep the push to the summit is. I don’t even have a watch so I wasn’t at all surprised to find I was one of the last in camp when I crawled out of my tent 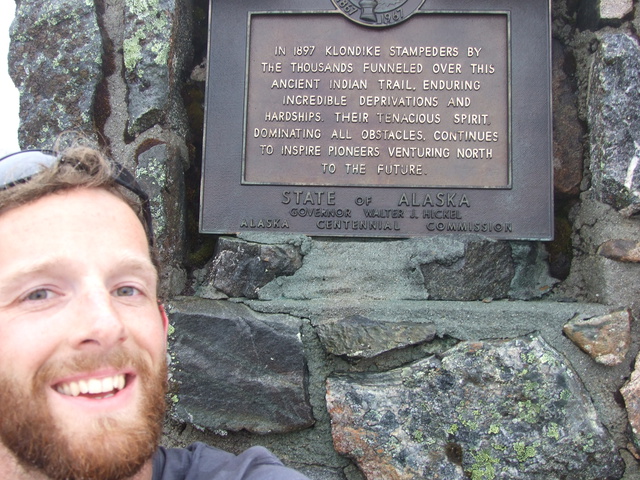 I was pleasantly surprised how quickly I arrived at the base of “The Golden Stairs” – the scene of the countless famous photos I had seen in the north. In order to move a ton of gear over the trail, each stampeder had to make many passes, slowly shuffling their gear further and further along. Most hiked the trail 40 to 50 times with between 50 and 150 lbs (25 – 70kgs) each trip and would wind up hiking over a thousand miles (1600km). It was here at the base of the stairs that many stampeders simply gave up and turned around, leaving their ton of gear to decay where it sat. The ground was littered with all manner of artifacts, including remnants of the aerial tramways that were constructed to haul gear to the top. 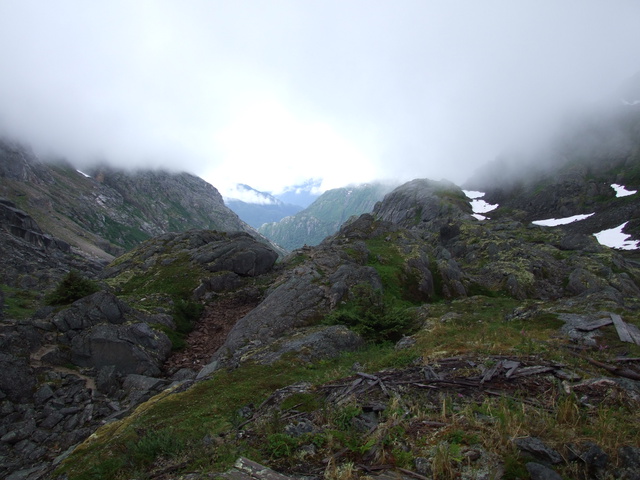 Although I couldn’t see very far in front of me, I was very happy to push hard up the very steep rock scramble – without a doubt the steepest pitch I have ever hiked with a full pack. About 20 minutes had me at the plaque commemorating the trail, 5 more had me across the surprisingly unmarked border into Canada and 5 more saw me sitting in the summit shelter cooking a hot lunch. It’s not every day you get to hike across the border from the US into Canada and we were all grinning at the idea.

We lingered in the cabin, chatting to the friendly ranger and delaying the inevitable return to the now snow covered, windy trail. 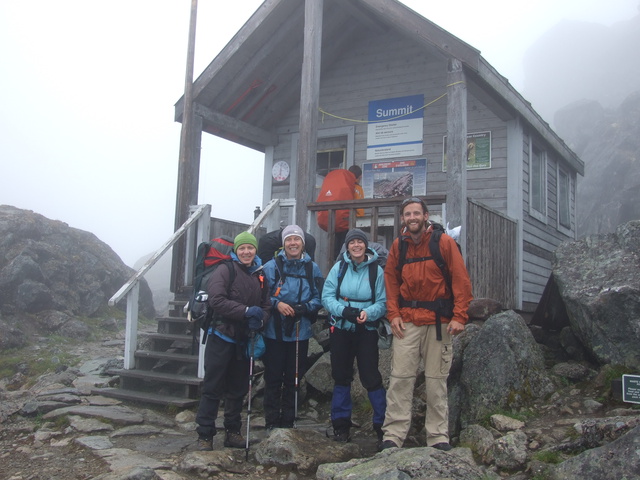 As I descended down into a narrow valley on the Canadian side the trail changed once again. Now completely in the alpine and very snow covered a tricky blend of walking and sliding across the fall line was needed. A couple of times the clouds parted long enough for me to realize that if I was to slide directly down the steep fall line, I would wind up taking a dip in the large, blue and undoubtedly cold Crater Lake. It continued like this for the rest of the day, slowly loosing elevation and being less and less snow covered as I went. The end of the day saw almost everyone camp at “Happy Camp” – a tightly packed, windy spot. It was raining now and quite cold, which left us pondering the name – we all got a laugh when a fellow hiker concluded “This is where happiness goes to die”. 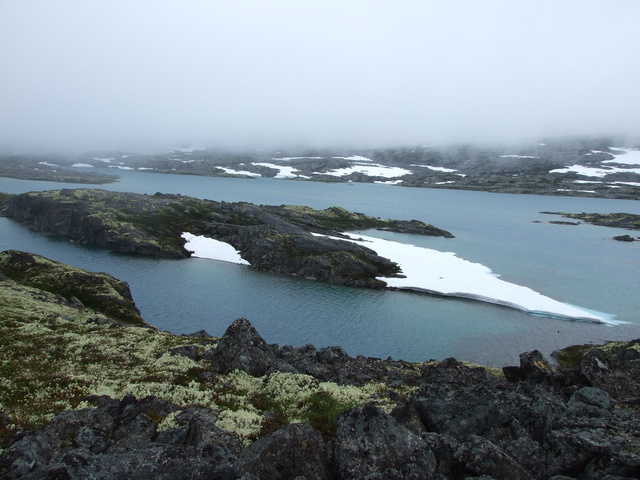 It was still raining in the morning so I quickly shoved everything away wet, inhaled some hot oats and got on the trail hoping to get away from the weather as I hiked further down the valley. The amount of water on and around the trail was amazing – massive lakes were being fed by countless fast flowing snow-melt streams. Each time a crossing was required I carefully hunted up and downstream, being extra careful to keep my feet warm and dry. The trail wound on and on in this manner past Deep Lake campground, then Lake Lindeman where I stopped for lunch and onto my campsite for the night, Bare Loon Lake 8.5 miles (13.7kms) from Happy Camp. Bare Loon campsite had 15 or so tent pads placed on a hill-side that each had an amazing view of the lake. The sun managed to come out briefly and a little bit of wind helped to dry me and my gear completely – such a nice feeling to be warm and dry and I feel sound asleep as soon as I lay down. 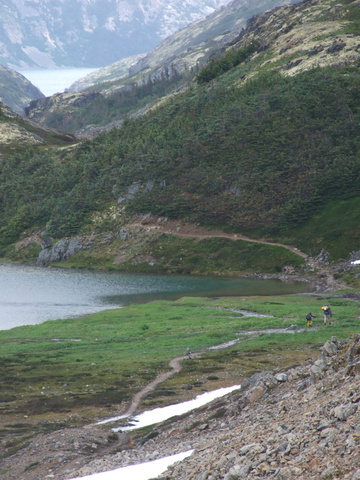 The Chilkoot winds on and on

The Chilkoot Trail ends at Bennett, where the stampeders had to build some kind of boat and float down the mighty Yukon River to Dawson City. Of course, few had ever built a boat and tried to “Huck Finn” it down the Yukon on little more than a couple of logs lashed together. Seeing the disaster before it happened, the Mounties quickly stepped in to make sure the newly constructed craft were river worthy – they had to have a certain number of planks above the water line and they had to be capable of steering in some way. The Mounties actually setup an obstacle course that had to be navigated before would-be boaters could leave Lake Bennett and get onto the Yukon River.

Knowing I had a short day I let myself have a lazy start and soon came to the “cut-off” trail – a small windy path that leads to the railway line. Most people that need to return south to Skagway pay $60 USD for a ride on the White Pass Train. I chose to take the slightly less legally correct option of hiking along the railway line until I met the highway where I would hitchhike back to town. As luck would have it I caught up to Murray and his son Steve on the tracks who were driving to the trailhead to collect their second vehicle. Of the 100,000 stampeders that arrived on the shores of Dyea and Skagway, somewhere around 30% actually made it to Dawson City and started looking for gold. Of those 30,000 prospectors, less than 1% actually found gold. It wasn’t required, but I’m sure it helped to be crazy. 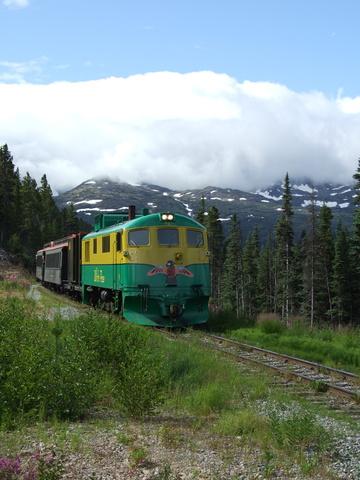 While the lack of visibility at the summit detracted a little from the hike, I still had a fantastic time and highly recommend The Chilkoot to anyone with a passion for the outdoors, especially anyone with an interest in gold rush history.
A big thanks to Scott for suggesting the trail a couple of months ago.

Crossing The Congo: Over Land And Water In A Hard Place
by Mike Martin, Chloe Baker, Charlie Hatch-Barnwell
From $29.45From CAD$41.22

Carrying a library of books is impractical, so I have a Kindle e-reader. From $42.99 on Amazon