I make my way South along the Moroccan coast, stopping at a couple of beach side cities that are heavily focused on fishing, and no so much on surfing (though surfing is growing for sure). The landscape quickly changes to arid, rocky desert, completely void of features. Away from the coast the temperatures are scorching, often over 110F before 10am. 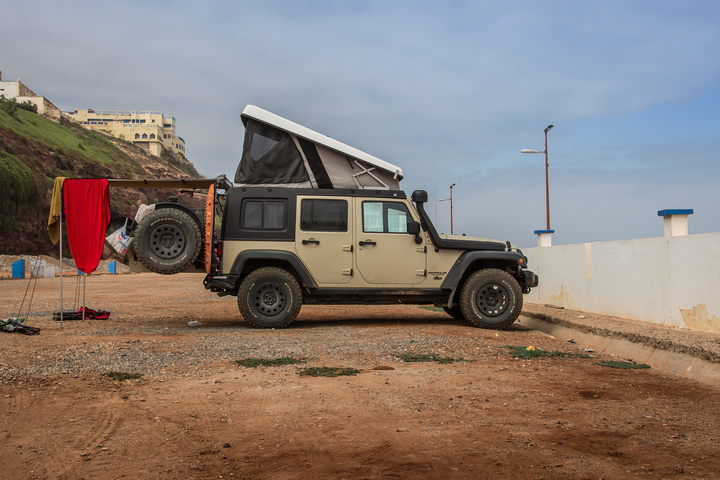 Camping on the ocean wall in Sidi Ifni

Western Sahara is not currently a separate country as I had originally thought – it’s a disputed territory, with the UN officially listing it as “non self-governing” – currently it’s under the control of Morocco, who want to keep it theirs. This means there is no “border” – I’m technically still in Morocco. 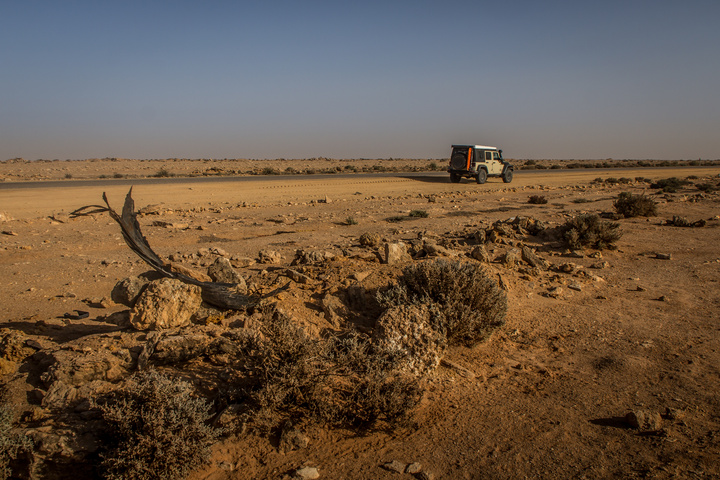 Western Sahara appears endless, with hundreds and hundreds of miles like this

The entire region is heavily patrolled by the Moroccan military and on the highway I pass through checkpoint after checkpoint where I hand over a “Fiche”. This is a document I have prepared in French with all of my details and the details of the Jeep – passport number, date of birth, registration number, etc. which makes the whole process go smoothly. The checkpoints are always polite and friendly, and to be honest it’s nice to know there is so much military presence patrolling the highway and area in general. 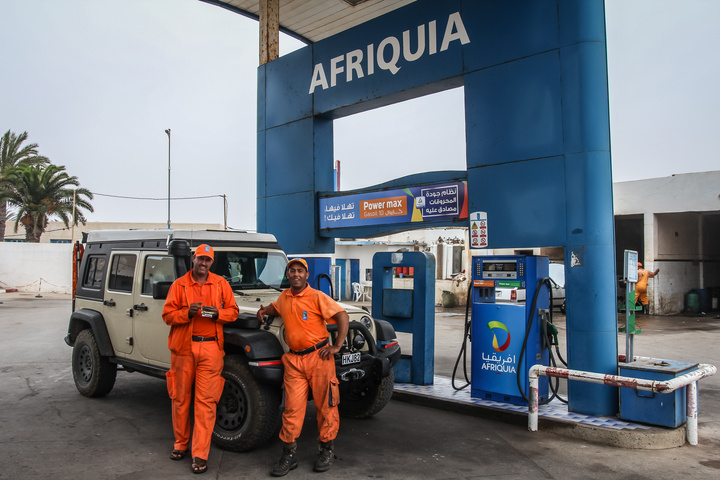 Buying gas at the conveniently-named stations – it’s easy to remember where I am! 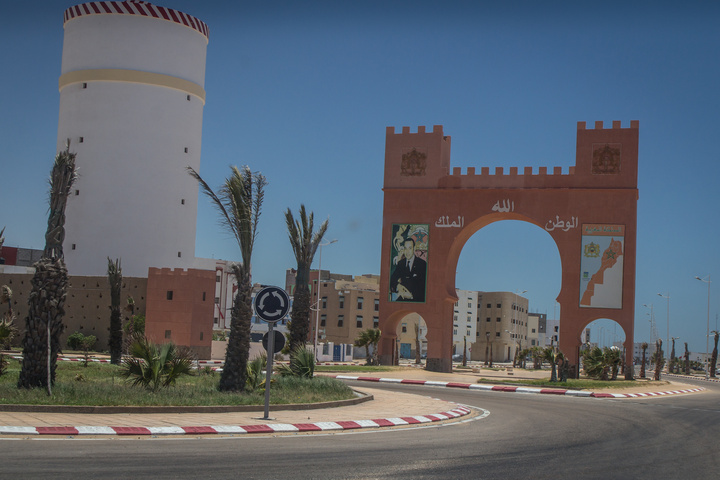 The cities in Southern Morocco are impressive

Distances are vast as I follow the ocean, skirting the edge of the Sahara desert, often driving hundreds of miles between towns. A town is often little more than a military checkpoint, a few concrete buildings and a gas station if I’m lucky.

I start to see UN Vehicles getting around, something I’ve never seen before. 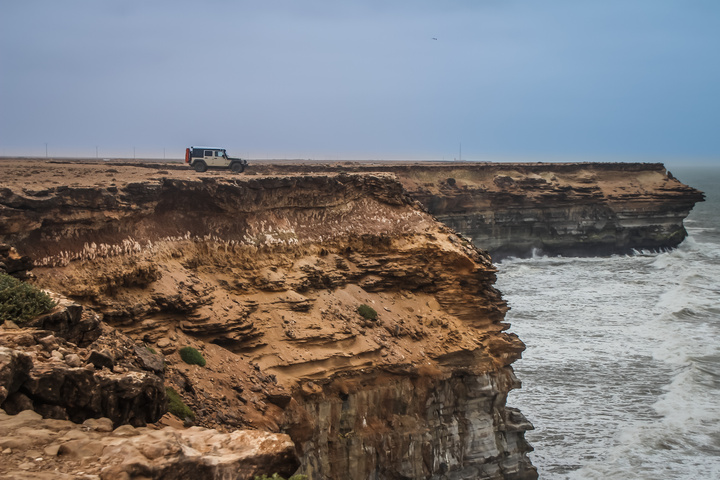 Everyone has warned me of gasoline shortages in this region, so I’ve filled my Titan fuel tank to the brim. This is not a forgiving place to get stranded.

In multiple places sand dunes have drifted onto and over the highway, and I’m constantly on the lookout for large groups of wild camels wandering across the highway. I can’t quite figure out if they’re completely wild roaming free, or if they have “owners” who are somewhere out of sight. The sun and heat are scorching during the day and temperatures drop rapidly at night in the open desert.

Camels on the road are a constant concern 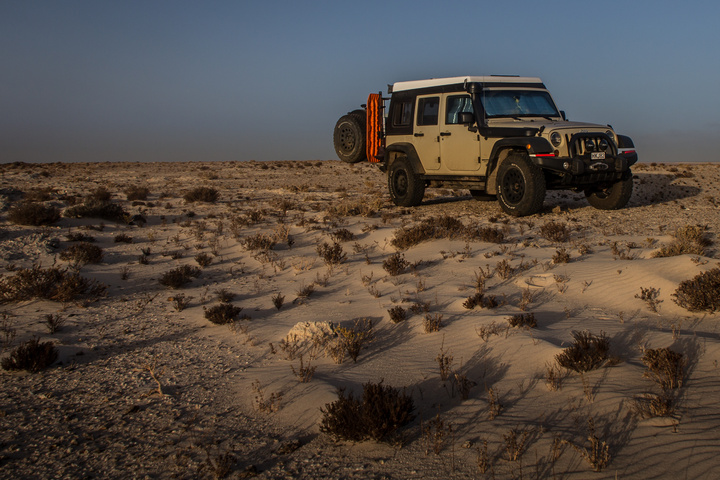 From ancient cities to mountains, sand dunes to oases, canyons to waterfalls, the list of beautiful things to see and do across Morocco has been virtually endless. Moroccans are outrageously friendly, and it’s a fairly cheap country to travel in. Given all of that, Morocco rates right up there as one of my all-time favourite countries for Overlanding.
I could happily stay here three more months.

That being said, it’s now time to lay down some miles.

Mauritania and further South are calling. 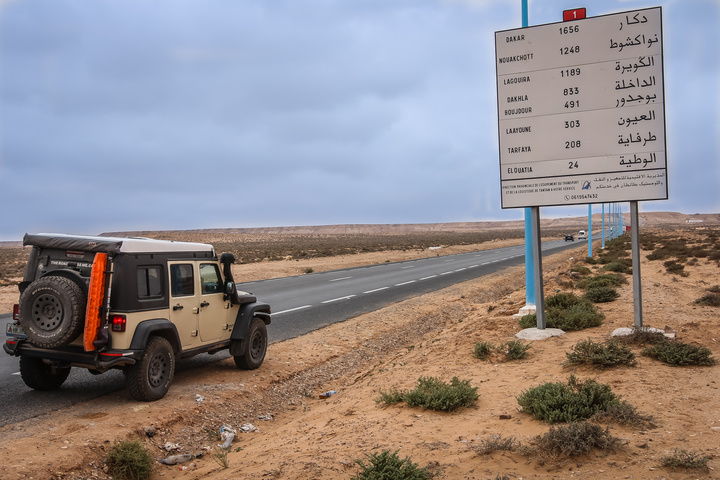 Time to lay down some serious miles 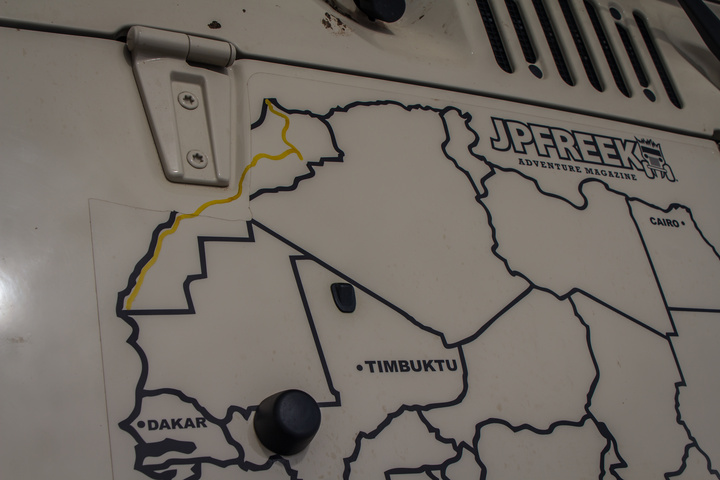 Country number one, you have been amazing Morocco!