All my gear is stored inside durable Pelican Cases. From $99.95 on Amazon

The road South to the border of Gambia is under construction, which means traffic is diverted to drive on a very makeshift road on either side of the main road. This makeshift road is dirt that has somehow been compacted down and hardened into concrete, but is also extremely rough. Traveling in 1st and 2nd gear is painfully slow, and the heat is immense. After hours and hours I have only traveled a hundred or so miles, putting me at the border well after midday, something I usually try to avoid. 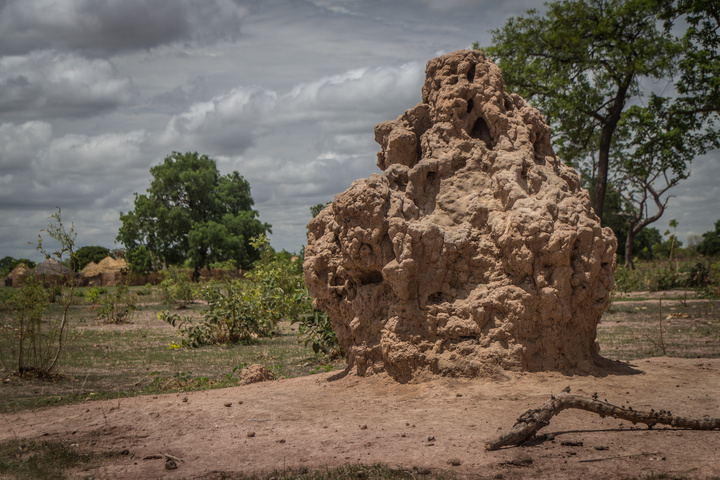 Monster termite mounds are all over the place

Arriving at the Senegal side of the border is the usual story – a cluster of crumbling buildings, some people milling about, kids swarming around hoping for candy or some hand out. I get myself and the Jeep stamped out of the country, and after a cursory look inside by the authorities I’m clear to drive past the makeshift barrier. 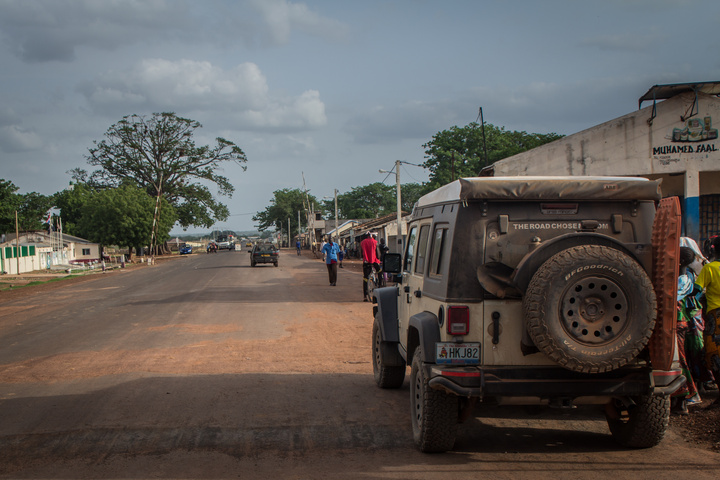 Only a handful of yards further along on the Gambian side I park in front of the immigration and customs buildings, but I’m quickly ushered to drive around behind the building. Here the customs guys search the Jeep, and I get the feeling they wanted to do that out of sight of the road and everyone milling around. I also get the feeling they are admiring the Jeep and they know it’s not cheap. English is the official language of Gambia, though they all speak a native language to each other when they don’t want me to understand.

After the search I move the Jeep around onto the highway again, and head inside for the paperwork. After some back and forward at immigration it seems I need a visa for Gambia, something I’m no so sure about, though they do have a list of countries on the wall. For a reason they can’t really explain to me I need to go into the next little town to get the visa, so I have to deal with customs first.

Next door customs write up a temporary import permit for the Jeep, and before the guy hands it over he says it will cost 10,000CFA (about $18USD). When I ask for a receipt, the mood instantly changes and I know I’m being bribed.

I know it’s a bribe for a few reasons:

I explain over and over that I’m happy to pay, by I must have a receipt. I can see this makes them really angry, and pretty soon the eight or ten customs guys are banding together demanding I pay, insisting that the paper they are giving me is the receipt, even though it doesn’t show a price.
When I ask them to write the price on the back, they refuse.
When I say I’ll write the price on the back and they can sign and stamp it, they refuse.

They obviously don’t want any record of me paying this money. Surprise, surprise.

I play my usual game and make it clear I have all the time in the world. I walk over to the Jeep, grab and cold drink and a snack and hang around. Soon enough a guy starts pleading with me to move the Jeep – he doesn’t want it out on the highway – he says it’s in the way (it’s not) – more likely he just doesn’t want it to be seen. I don’t move the Jeep. 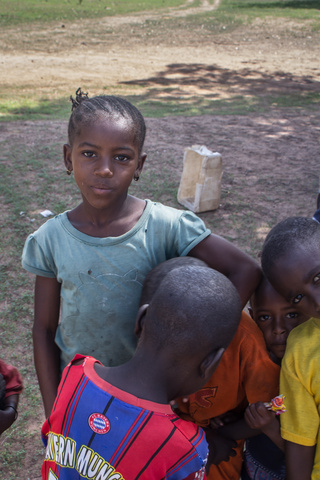 Kids excited to see the Jeep and I, hoping for candy or money

I got back into immigration to sort out my visa situation. After explaining the whole thing with customs to them, it’s obvious they all know it’s a bribe, and when I ask them one by one they all agree they would not pay without a receipt either. Gambia always issues receipts for this kind of thing, they assure me. Back at customs those guys are furious immigration said anything, and scream at me that customs don’t interfere with immigration, and immigration should not interfere with customs.
After that immigration won’t weigh in to help me anymore.

To get my visa I must go to the next town, but customs won’t let my Jeep move without the paperwork. They try to scare me by saying I’ll have to get an escort there and back, and of course I’ll have to pay for the escort – a lot by the sounds of it.
Of course I’m not paying for that, but they won’t tell me exactly how far I need to go.
When I say I will just leave the Jeep where it is and take a taxi, they are extremely pissed off, to the point they mostly ignore me from now on.
It seems they’re dead set on getting money out of me.

After a couple of hours of this the light is fading and I’m running out of options. I only have two cards left to play, so I give it a shot. When they mention it’s getting dark I shrug and just say I’ll camp right where I am, no problem. I explain I have food, water and a comfortable bed right there in the Jeep. They are incredulous at that, almost disbelieving I can sleep in my Jeep. They still don’t change their approach. 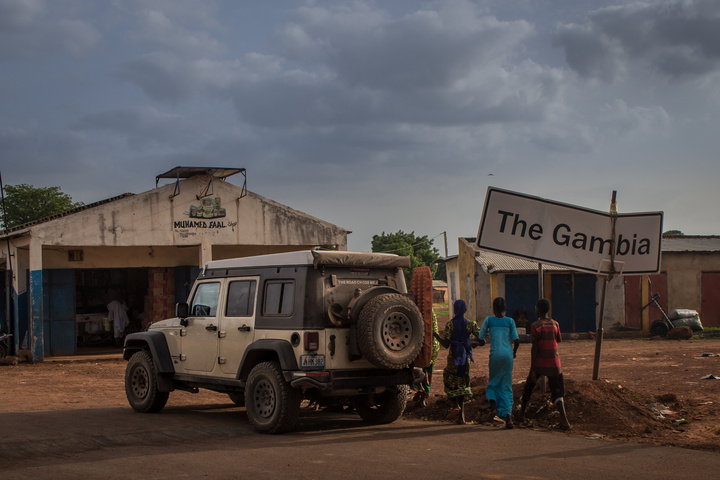 As a last resort, I mention that I know for a fact I’m not supposed to pay anything, and that I’m going to go back into Senegal and drive around to a different Gambian border. Finally the boss speaks up, and in no uncertain words says “I don’t care what they do at another border. Go away”.

As a rule I don’t drive in the dark, and I have no interest in hanging around the border after dark either, so I give in. I quietly say to the original guy that I will pay, and within 30 seconds I have the paperwork and he has his 10,000CFA. I drive away from the border as the last of the twilight fades.

Only three minutes away I arrive in the town of Farafenni where I immediately find the immigration building. After changing some Euros into the local currency, I buy my visa (which, hilariously, comes with three separate receipts all clearly showing the amount paid), get myself stamped into the country and, finally, drive into Gambia in the pitch black.

You win some, you lose some.

For all the details on Overlanding in Gambia, see http://wikioverland.org/Gambia

UPDATE: I have read a report of someone crossing a different border and paying 5,000CFA for the Temp Import Permit with a motorbike, so maybe there is a legit charge. Who knows.