Into Senegal without a Carnet

The largest border crossing from Mauritania to Senegal at Rosso is commonly called the “Worst Border in Africa”. Horror stories abound of hours spent paying hundreds of euros in bribes, only to move onto the next officer to start the whole process again. The misery is amplified by hoards of “helpers” trying to take your paperwork who don’t give you a second of rest. Many seasoned West African overlanders swear they will never cross this border again. Some have sworn off the entire continent because of it.
To add to the misery, I’m attempting the crossing without a Carnet de Passage – the international customs document many people insist is absolutely mandatory for entering Senegal with a foreign registered vehicle.

Given all of that, I choose to cross at the smaller, lesser known border of Diama. It’s the only other place to cross the Senegal River with a vehicle, so it’s my only choice given that I want to avoid Rosso at all costs.

Still on the main highway I’m stopped at multiple checkpoints, nothing new for Mauritania. What is new, however, is the insistence of the guys hanging around that I buy vehicle insurance for Senegal. They even go so far as to say I can not proceed without it (a lie – given I’m still 60 miles from Senegal). They’re offering highly inflated prices and want to trick people into buying insurance now. The disappointment on their faces is clear when I tell them I bought bought six months of insurance in Nouakchott that covers the Jeep for all of West Africa.

The smaller road to Diama parallels the Senegal River for 20 or so miles, and I’m excited to see groups of Warthogs running across the road – usually a mother and much smaller babies. These are the first genuine “African animals” I’ve seen, and I can’t wipe the smile off my face thinking about the larger ones I will be seeing in the next two years.

The border itself is a collection of small, shabby buildings situated on either side of a dam, with the road running a few hundred yards down the wall. A few vehicles are crossing, and a couple of people are milling about. None bother me. The midday sun beats down relentlessly. Mauritanian customs put a stamp in my passport which prevents me from leaving the country without the Jeep, which means I must pay them a visit now. I walk into the crumbling building to find about 5 military guys half in uniform sprawled across a mattress on the floor, napping. An old TV is blaring in front of them, but they’re dead to the world.

One younger guy is awake and ushers me into his office, little more than a big wooden desk with two desperately broken and sweat stained office chairs in front. A computer has been shoved to the side, covered in a thick layer of dust, and looks like one I used in 1998. He motions for me to sit and seems happy enough to write down my details in a massive paper ledger, and cancel the stamp in my passport. When he is done, he glances up and mumbles for ten Euros. I smile broadly and loudly say “My friend say you would say that. HaHa.”
I pickup my passport and walk out. He does not say anything. He does not try to stop me.

I walk next door to the decrepit Immigration building, where the story is replayed. The slightly older and more serious looking officer stamps me out, writes my details into an enormous ledger, then asks for 10 Euros. He is still holding onto my passport, and does not smile when I use the same line as before.
In fact, he scowls down his nose at me, looking very unhappy. 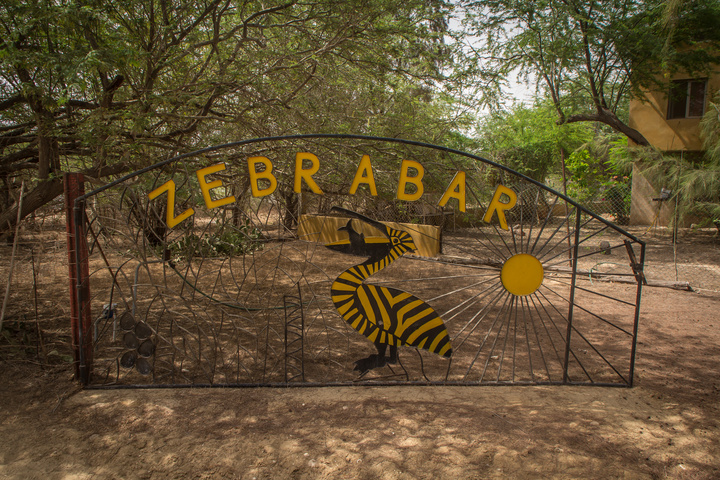 Zebrabar – A famous Overlander hangout if ever there was one

After a few minutes of back and forth in my very poor French, multiple other guys enter the room and start also saying I must pay the 10 Euros. They are close to yelling, leaving me no room to discuss. I keep my cool, smiling and being very polite. The most senior man – identified by a dazzling collection of silver on his uniform and a huge pot belly – makes it clear he wants my 10 Euros. Completely unfazed, I shrug my shoulders and wander out to get a cold water bottle from the Jeep. I amble around making it clear I’m happy to spend a few hours waiting, and less than three minutes later one of them wordlessly gives me my passport and stomps away.

For years I dreamed of seeing Baobab trees in real life – now they are everywhere!

On the Senegal side Immigration is actually a large olive green tent, run by a very dignified and senior looking man in a crisp uniform. Inside, the tent has been transformed into the Taj Mahal, clearly serving double duty as border post and living quarters. Everything is very neat and clean and I can see he’s very proud of the fan blowing on him from less than a foot away. In this heat, I’m sure a fan is worth it’s weight in gold. A beaming color photo of the Senegalese President hangs on the canvas wall. The entrance of the tent is extremely low, and the large desk he sits behind is high and completely blocking the entrance, so I’m forced to half squat and half kneel just to be able to talk to him.
The look on his face tells me my kneeling in front of him is not an accident. 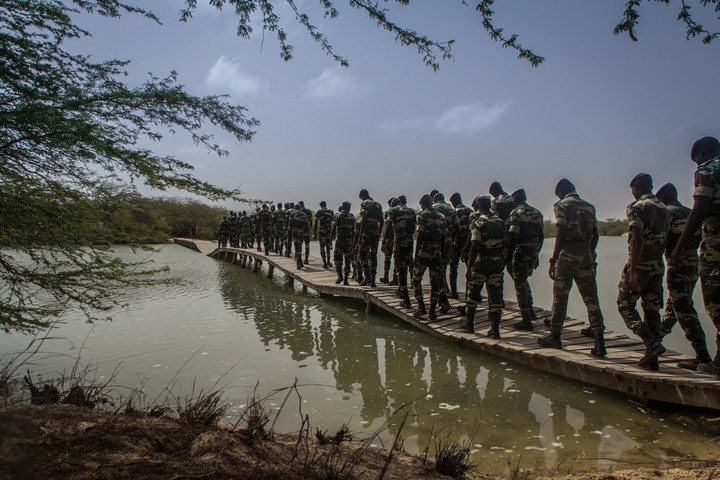 The Senegal Army paid a visit to Zebrabar – on a training exercise. They were very friendly

After five minutes of him writing my details into yet another huge ledger, I’m all stamped into Senegal, so I walk over to the tiny shack that is apparently Customs. A young guy there is chatting on his cell phone, and barely glances at me or my paperwork as he snatches it and begins filling out a Passavant, which is a Temporary Import Permit for the Jeep. He never even mentions a Carnet. After everything is written up, I pay 2,500 CFA (about $4USD) and get a very official looking receipt, stapled to the Passavant. It’s only valid for 48 hours, and I must go the Customs head office in downtown Dakar* to get it extended, for free.

Less than an hour after arriving on the Mauritanian side, I’m all set, and I quickly drive through the lifted boom gate before the guy there can ask me for money. 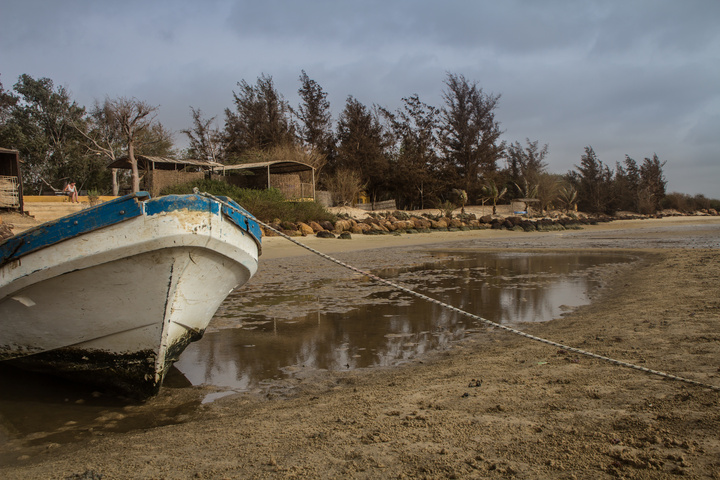 With the help of the my Titan transfer tank I have driven 460 miles through the whole country of Mauritania without buying gas once. When I fill up in Northern Senegal I still have another 7 gallons in the tank, making my total possible range 600 miles even with a brutal headwind in the desert, and city stop-and-go driving in Nouakchott.

For all the details on how to Travel Overland in Senegal, see http://wikioverland.org/Senegal

* NOTE: It’s possible to extend the passavant at customs in St.Louis, near the Northern border, but they are renowned for being extremely corrupt and will demand hundreds of Euros. Dakar is free.

Lizards are starting to show up all over the place 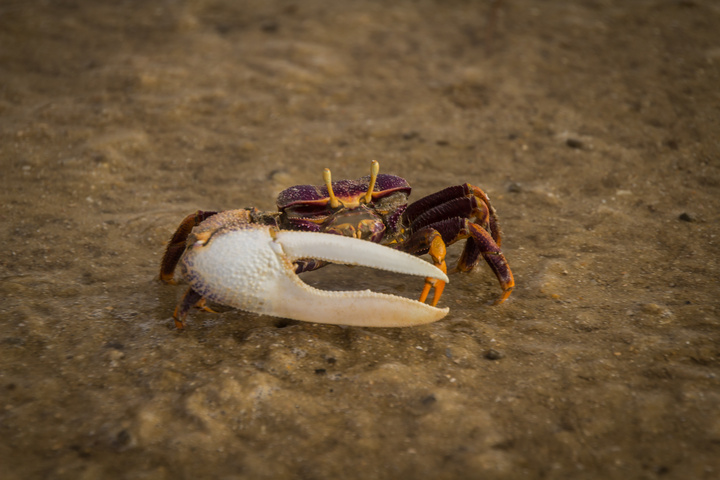 These lopsided crabs cover the tidal flats, making the ground look alive when they move

These guys just spent two years driving around West Africa – every country! and loved it!