Across Nigeria. Day One.

Soon after leaving Customs and Immigration we are waved down by a group of men on the side of the badly crumbling paved road. I have been warned numerous times of fake stops in Nigeria that can turn violent, so I am trying to decide if these guys are legit or not. They are only wearing shorts and undershirts, and I see one hastily putting on a shirt and doing up buttons. The shirt says “Police”, which makes me think they are legit.
Also, they all have automatic weapons, so I’m stopping.

The men turn out to be extremely friendly, forward and very, very loud. They speak very fast, and I think it’s partially pigeon English or something similar. One can’t stop saying “MY NI**ER” and “No S**T” at the top of his voice, and is extremely excited to vigorously shake my hand and say “Cool” repeatedly. After figuring out I am a tourist, checking my passport and writing down my details, they are happy to send me on my way.
“Welcome to Nigeria”.
“Safe Journey”.

A mile or so further along the scene is repeated, though these men look even less legit. Before they can stand up and pretend to be official, my friends drive right past without slowing. I can now see automatic weapons being produced and official-looking shirts, so I stop in the middle of the road and leave the engine running. The men are obviously furious, and even the “big man” comes over, red in the face and yelling. He demands my passport and asks repeatedly why my friends did not stop.
I explain that because all the men were lounging in the shade my friends didn’t know to stop, which he does not like at all. After snatching my passport, he says I must go and get them, and bring them back to him before he will give my passport back. He is not a happy man. This is not good.

Only a mile or so down the road I find my friends stopped at an Immigration checkpoint, looking much the same as the previous ones. I explain to them what just happened and the boss of this checkpoint overhears (the official language of Nigeria is English). He is immediately furious that the previous guys took my passport, and insists they are not allowed to do that, and I should never give my passport to anyone other than Immigration. Before I can react he and another officer snatch up the passports of my friends and cram into the front seat of the Jeep. With my new passengers we turn and drive and drive back, with this man talking full-speed the entire time. 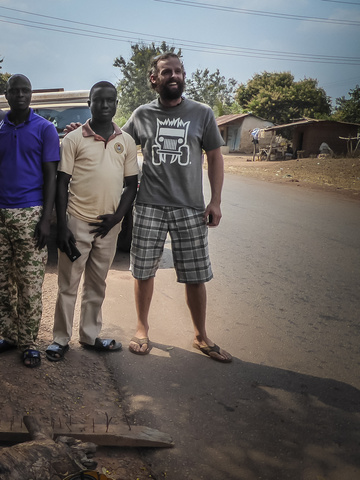 With military guys in Nigeria after sorting out some issues

Before even leaving the Jeep, the two big men start arguing back and forth until the situation is clear. The man from the first checkpoint is mad my friends didn’t stop, and the man from the second checkpoint agrees. When I explain we’re worried about fake checkpoints and possible violence, they are a little shocked and assure us that won’t be a problem in Nigeria. All the Police and Military are very honest here, nobody will try to bribe us or otherwise give us trouble.
Somehow I don’t believe them.

Quickly everything is resolved, and the guys from the first checkpoint give back all the passports and we move to the second checkpoint. Everyone here is now extremely friendly, smiling, shaking hands and posing for photos with us. They bid us a very warm stay in Nigeria,
“Welcome to Nigeria”.
“Safe Journey”.

The first few hours in Nigeria continue in much the same fashion. Guys at checkpoints rise from shady spots, flag us down and then write all our details down. Each checkpoint is friendly, with lots of handshakes and warm welcomes. Most checkpoints the guys will say “What did you bring for me?” which I often reply that they need to give me something too – we will trade. Often I ask for their hat or military shirt (which they will never give) and they smile and laugh before sending me on. 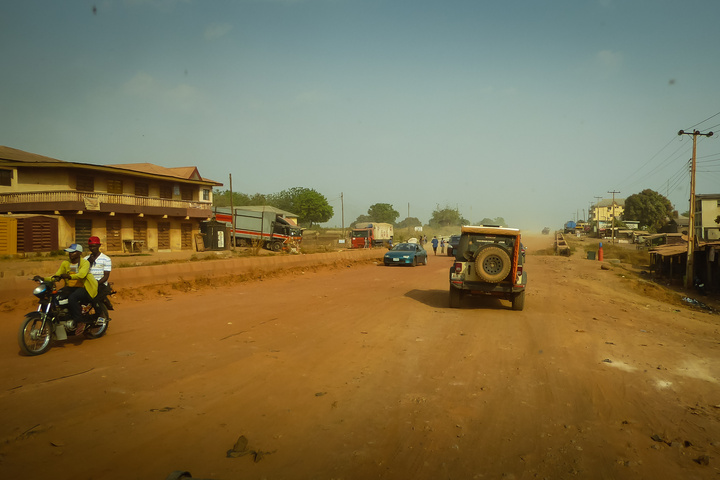 Attempting to find the expressway

In the afternoon we navigate the horribly broken roads and traffic jams of Abeokuta, which looks like a large, modern city. There are skyscrapers, a functioning train and lots of infrastructure. This does not look at all like the West Africa I have gotten used to.
From here we find our way onto one of Nigeria’s massive expressways – a four lane highway where traffic moves at breakneck speeds, despite the rough and broken surface, extremely slow trucks and random Military and Police stopping people right in the middle of the moving traffic. It’s fast and furious, and I am concentrating as hard as I can to maintain about 60 miles an hour and keep up with traffic. The odd Mercedes or luxury SUV comes past going much, much faster.

The train crossing a hectic city of Abeokuta

After a few hours of this I am exhausted, and just before the sun hits the horizon we find ourselves in a kind of truck-stop town clustered around the expressway. I spot a hotel with a sufficiently high wall and armed security, and the price is right – 5,000 Niara for a crappy room, which is about 10 euros with my black market exchange rate.
The town, hotel and room are kind of like the Western World – there are working showers and toilets, air conditioning and occasionally even hot water, except that everything is severely neglected and run down. Even in this nothing town I see many skyscrapers and very new, modern buildings. 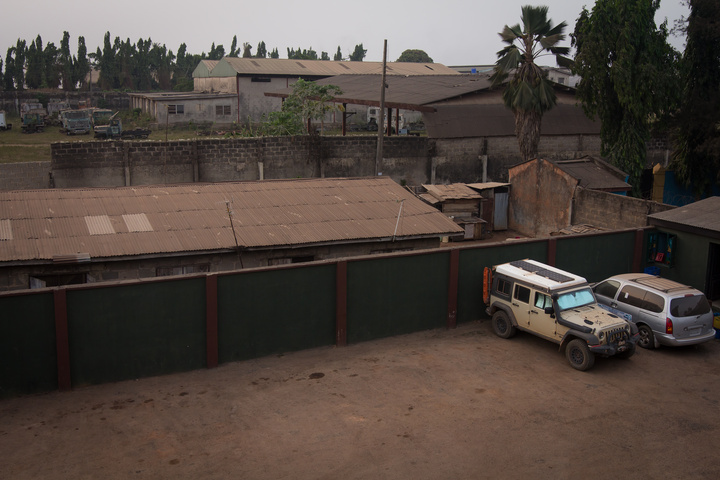 Jeep parked against a wall for the night

I reverse the Jeep against a wall so the rear can not be opened, hoping that will at least slow someone down from trying to empty the contents. As soon as I park the Jeep in the lot I realize I have forgotten to eat lunch, and am absolutely starving. After much negotiation we manage to order chicken with Jollof rice, a delicious spicy Nigerian specialty. The chicken is absolutely massive and cheap (I think it must be Turkey) and the beer is also cold and cheap. When the bill comes the prices have magically all gone up, the total adds up to more than the sum, and the waiter has forgotten that I paid him for beer already and he owes me change. “Oh yeah, he says. I’ll fix that”.
After the prices changes three more times, we pay what we were quoted and call it a night.

Before going to sleep I drag the desk in front of the locked door to my room, and leave the key in my side of the lock, hoping it will prevent someone using another from the outside. 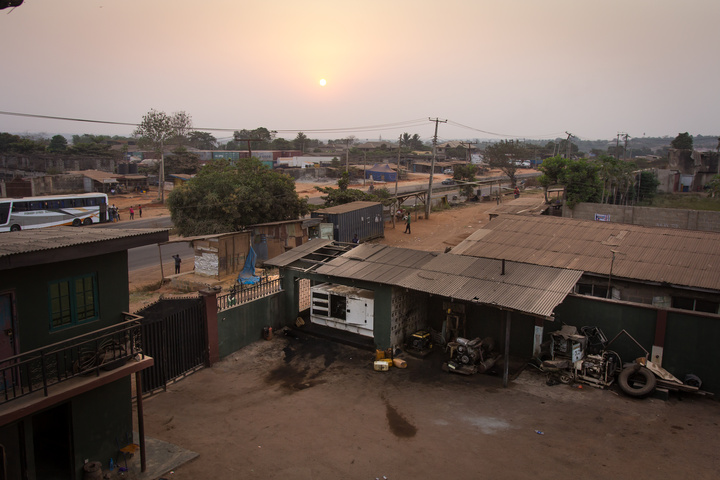 The view from my hotel, with the world’s loudest generator in the foreground

I eventually drift off to a restless sleep to the sound of the bone-rattling generator directly outside the window.

Day one in Nigeria.
Success.

Leave a Reply to Jim K in PA Cancel reply

A Bolt Reciever Lock keeps the reciever safe, and it uses the Jeep ignition key. From $34.82 From £35.43 on Amazon