The Mayan ruins in Tikal have been on my radar for a long time and Rupert & Amy confirmed we need to make a stop. The Jaguar Inn has cheap camping, so we throw up the tent and wander into the ruins hoping to catch the sunset over The Grand Plaza. We really have no idea where we are going and by some fluke chance end up in ‘the perfect sunset viewing spot’ at exactly the right time. Amazing. 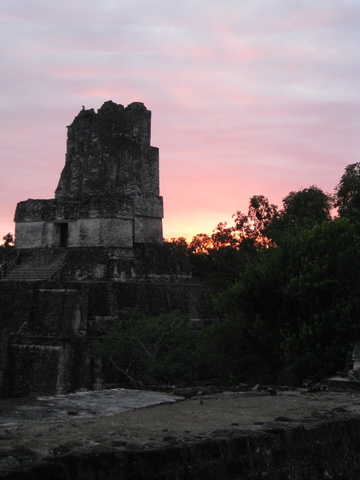 Sunset over the temples was spectacular

The city here began around 700 BC and peaked in around 550 AD with a population estimated at 100,000. The city collapsed quite quickly around 900 AD, which our guide thought was from a food shortage caused by over-farming the land. It remained ‘undiscovered’ until 1848 and scientists first worked on the site in 1881. Amazingly most of the exploration and restoration was carried out by The University of Pennsylvania, where quite a few of the original artifacts remain today. 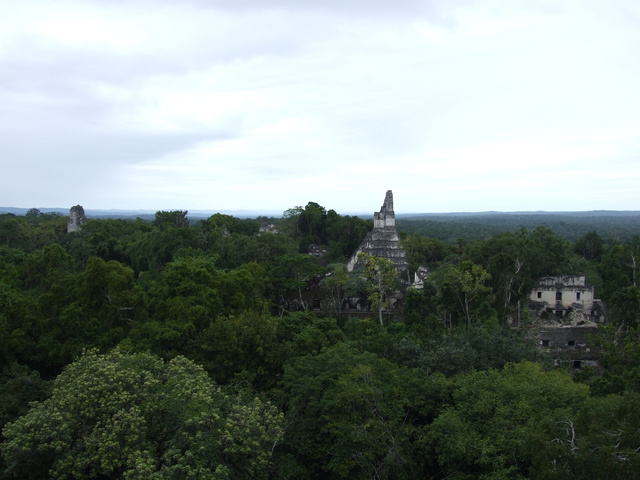 Waiting for the sunrise over the jungle 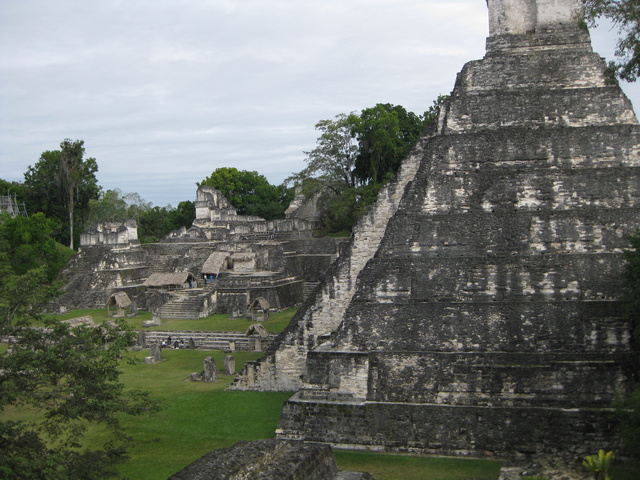 The ruins are so immense one could wander for an entire day and not see everything, let alone understand half of it so for the first time we splash out and set up a guided tour for the morning. We’re up at 5:30am and catch a bus-like thing to the far side of the ruins, to the tallest temple (61 meters) which is the best for watching sunrises. We sit quietly in the chill morning air and while the cloud cover hides the actual sun itself, a couple of monkeys come over really close to us and we can hear numerous howler monkeys nearby. To imagine what they sound like, think of cross between a dog howling and barking, but with the raspiest, sore through imaginable and make it loud. Really loud. The noise is so loud and unexpected I did not believe it was coming from a monkey until I saw it with my own eyes. 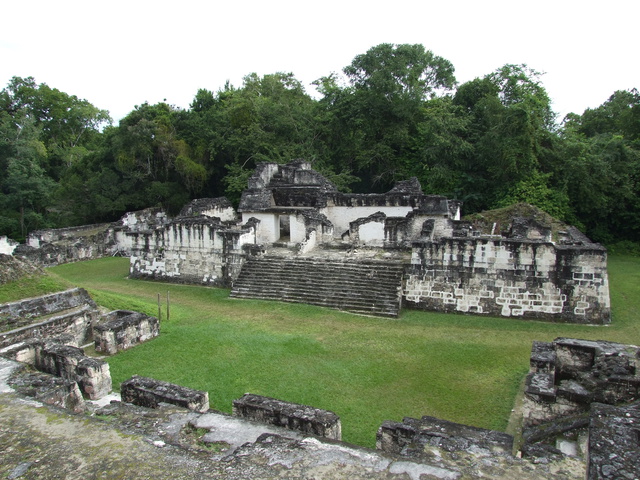 The houses of importatnt people 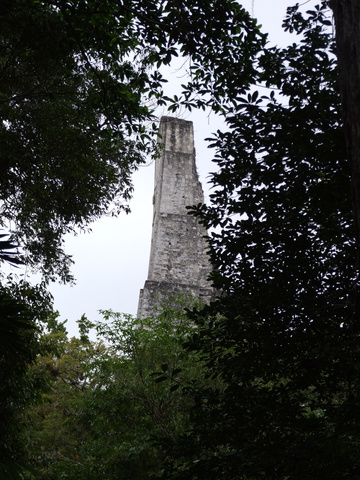 Our tour guide is excellent and was clearly very proud of his native heritage, and of being Guatemalan. We walk around the ruins for three hours, stopping at all the major temples and carvings which are too beautiful and numerous for words. 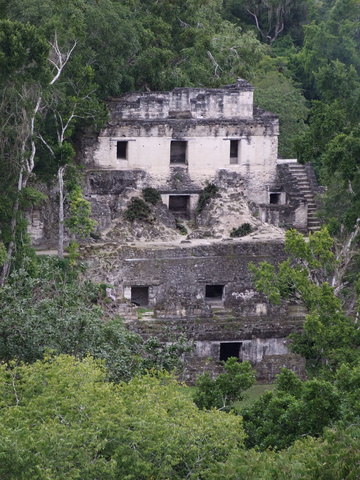 Perched on a hillside in dense jungle

Many of the ruins have been left un restored

Our guide coaxes a female tarantula from it’s burrow and I eagerly volunteer to hold it in my hand. For it’s size it is surprisingly light (essentially nothing) and it didn’t bother me until it started walking up my arm, at which time I was happy to be rid of it. 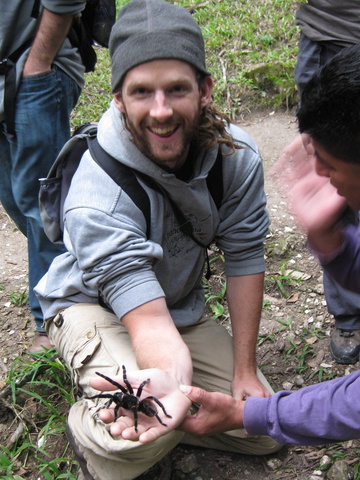 What a friendly little tarantula! 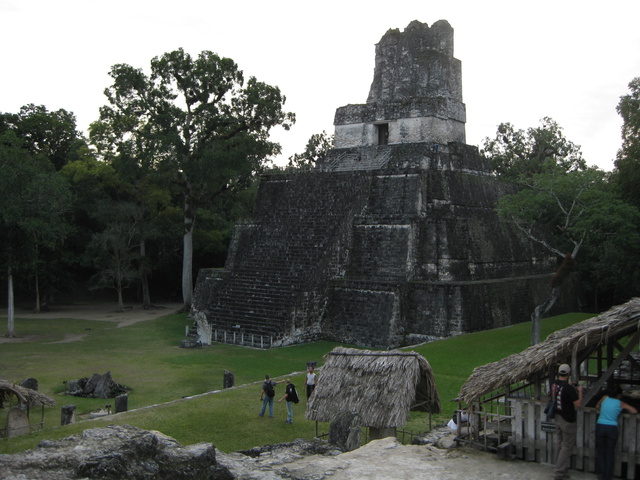 One of the big temples in the Grand Plaza

Walking around we see quite a few spider monkeys in the trees and the highlight comes when our guide pauses and says “Hey, watch this.” He knows which way they like to go, and the only way across is to leap from one tree to another, clearing a gap of about 2-3 meters about 5 meters off the ground. The little baby goes first and then mum follows, both with no difficulty at all. 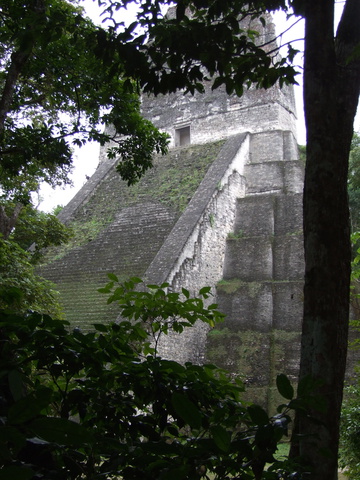 We climbed to the top for an amazing view 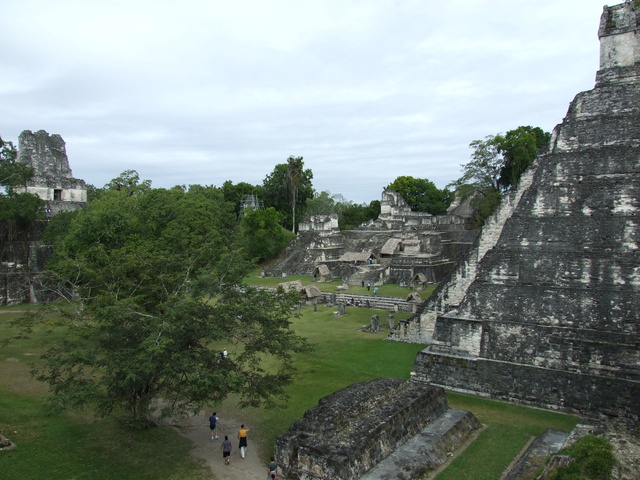 The Grand Plaza at Tikal

We move on from Tikal in the early afternoon, passing through the touristy island of Flores, which appears to be one giant unsigned one way street. I drive for quite a while in the wrong direction and nobody seems to care. We poke into all the little tourist shops which Kate loves and sit down for lunch where I have my first Guatemalan coffee. It’s so good I’ll have to be careful not to drink too much. 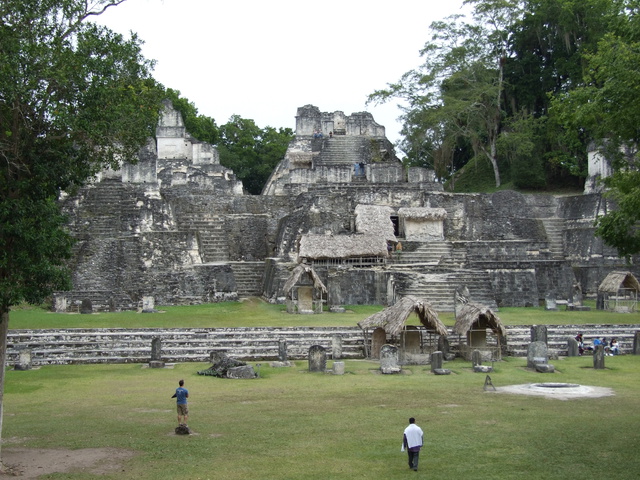 Looking across The Grand Plaza