To protect the engine I'm running a Rugged Ridge Engine and Transmission Skid Plate. From $274.99 From CDN$439.03 on Amazon

Mike and I have been wanting to hike The West Coast Trail together ever since we came to Canada a few years ago. Severe weather a couple of winters ago delayed the opening of the trail that year, forcing us to shelve our plans and bide our time. After talking about it for so long we are both really excited to finally get to hike The West Coast Trail and can’t stop chatting and grinning all the way to Port Renfrew, the southern trail head.

Much like the Chilkoot, the First Nations people of the area had been using the trail for hundreds of years before foreign sailing ships came into the picture. The rugged coastline claimed many unsuspecting ships and so from 1888 to 1890 the government built a telegraph line on the trail in the hopes of saving lives through better communications. Twenty odd years later a second lighthouse was constructed and the trail was greatly improved to act as a life saving route for shipwreck victims. As technology improved shipwrecks became a thing of the past and the trail was abandoned until 1973 when it became part of the newly established Pacific Rim National Park.

Today the 75 km trail is by far the most famous in Canada, often making an appearance on lists of the world’s best hiking trails.

Port Renfrew seems to brew it’s own weather, mostly of the oceanside misty, damp kind. Our tent is soaking wet in the morning, which we think is rain but turns out to just be ocean mist/fog that settles on everything. Amped to get hiking we amble into the ranger station and discover we’ll have to wait until the following day before we can begin. The number of hikers per day is limited and a reservation cost an extra $25 each so we thought we would just wing it. While we’re there we pay the hiking fee of $160 each and sit through the hour or so introduction which is useful, but really only makes us wish we were hiking today. We spend the day organizing gear, walking around town and drinking cheap coffee.
Camp for the night is beachside and free

Early the next morning we drop off my Jeep in a secure parking lot (for $18) and get a ride to the starting point – a ferry across Gordon River. Everyone is hugely entertained weighing their packs when we discover a set of scales hanging nearby. Mike at I ring in at 36 and 40 pounds respectively, which is 10 pounds lighter than the next nearest hiker. One guy about half my size has 62 pounds. Ouch. The other hikers are keen to talk about how long we’ve planned for the hike and are quite taken aback when we shrug our shoulders and grin our usual answer to such questions; “As long as it takes”. 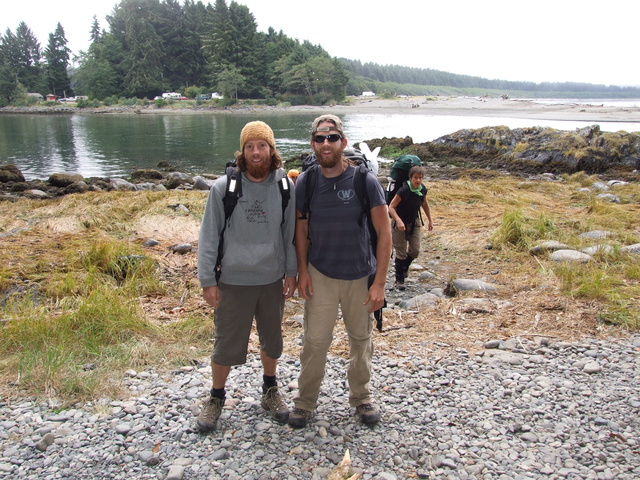 Happy at my own pace, Mike quickly disappears into the misty fog that surrounds us. We’ve been told over and over the first 10 km we encounter are the hardest of the entire trail. Most people prefer to start at the other end and cover this ground on their last day when their packs are lighter – I am happy to tackle it while eager and fresh. Quickly I am in the thick of it; mud, tree roots, uphill, downhill, bridges and ladders and all of it very very slippery. It’s been one of the driest summers on record, so I can only imagine what it’s like in a rainy year. Passing people hiking in the opposite direction I notice how tired and muddy they all are, not to mention they all reek of campfire. 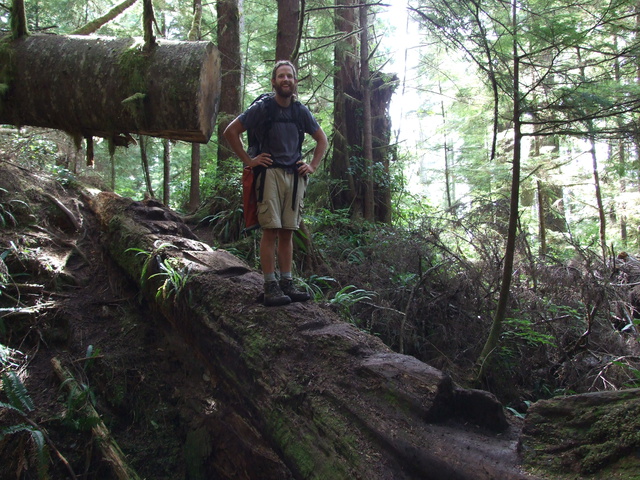 The scale of the trail...

By the time I catch up with Mike he has made a friend, Roger from the Netherlands who moves at a similar rapid pace. In many places along the trail we can choose between staying inland or hiking along beaches. We’ve been told over and over again to take the beach option whenever we can, so we head down a string of ladders to Thrasher Cove, our lunch stop. 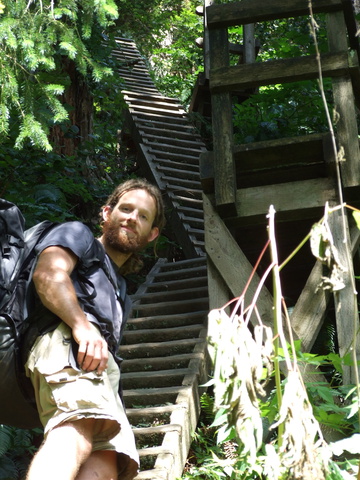 Dropping down some stairs 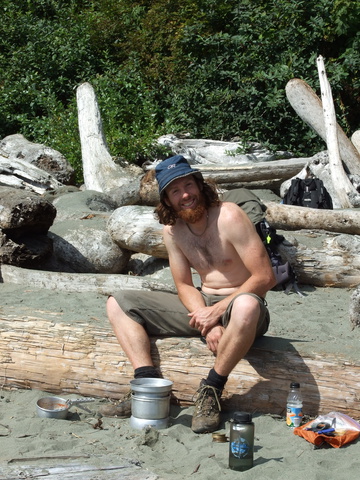 Mike cooking lunch in the sun

Hiking around Owen Point requires the tides to be just right, so we wait a couple of hours in the amazing sunshine and head out right as the tide is going down. Some great rock-hopping is required and throughly enjoyed by all. Owen Point has beautiful colored rock formations and we stumble upon an alternate trail that has us use ropes to go up vertical rock and over the still too-high tide. 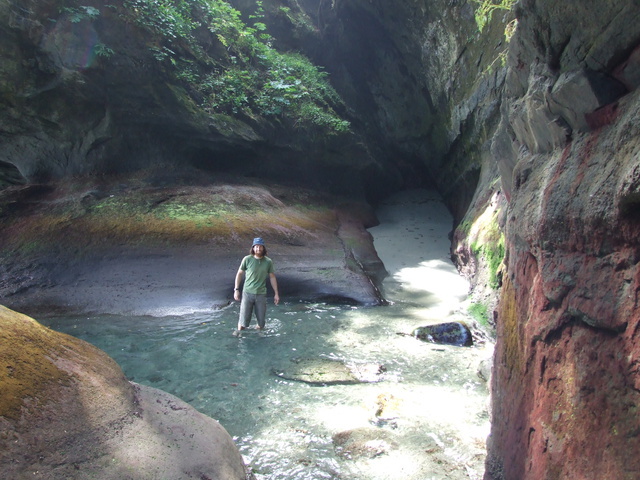 Mike in the rock formations at Owen Point

We follow the beach around, head inland for a few kilometers, use our first cable car with much calamity and arrive at Camper Bay, our stop for the night after 12 km. 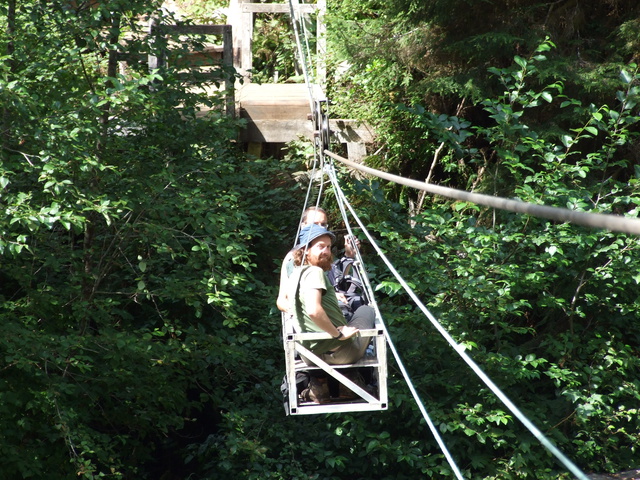 Roger and Mike in a cable car

The number of people here is mind-blowing – I count 14 tents in view when we arrive, with more being set up by the minute. We bump into some people from our ferry earlier in the day, including the guy with 62 pounds. They hiked inland for the entire day and did not look like they were having any fun at all on the rooty, muddy trail. 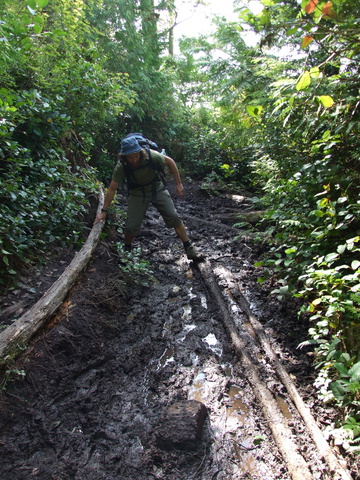 The next day we have a stretch of inland hiking that has an impressive vertical drop of about six ladders immediately followed by six more straight back up. 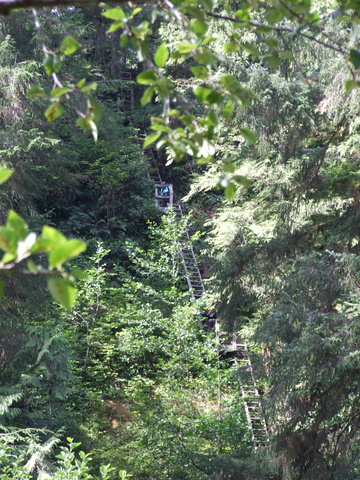 Navigating the one and only river crossing on the trail is disappointingly only a trickle that we walk straight across. 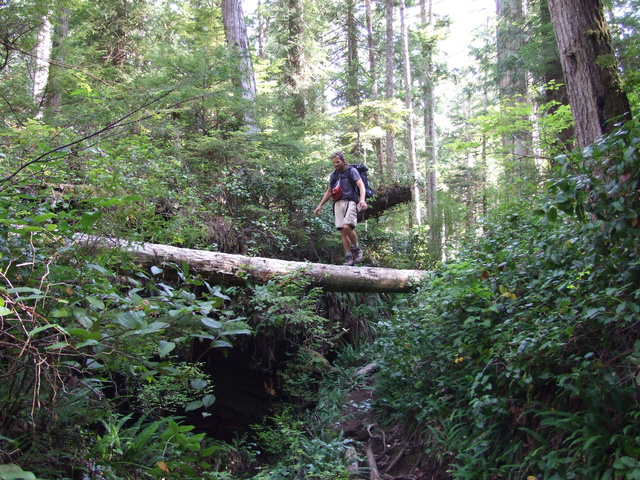 Walking along the beach and rock shelf is a great way to finish the 16 km for the day at Carmanah Creek campsite. We quickly throw everything in our tents and start walking up Carmanah Creek, happy to be rid of our packs. Jeff from Seafun told us about the world’s largest sitka spruce tree, the Carmanah Giant which lies only a kilometer up the creek from the campsite. Rock-hopping with tired legs is hilarious and we all inevitably get a boot wet in the creek, laughing the whole time. The trunk of the giant is much much bigger than any other tree at 3 meters, and even though it’s right at river level, it towers over all the other trees growing higher up the valley wall. 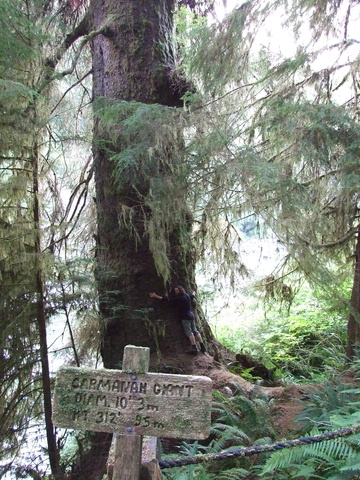 There is plenty more to come on this one…