A few winters ago my brother Mike broke his leg here in Canada which put an early end to his snowboarding season. He’s also an engineer, and when engineers have too much spare time they make crazy science projects. Enter Smoothie Bike!

Mike and his girlfriend Lesley had seed mechanical-powered pedal  machines to make smoothies from natural ingredients. They decided to build one that spun a generator (actually just a regular 110V motor) to generate electricity. Anything small enough could then be plugged in, and it turned out to be perfect to run a small blender.

Throw in some Organic raspberries, Organic oranges, Organic coconut milk and and Organic Banana and with about 30 seconds of solid pedaling, we’ve got a delicious and healthy smoothie!

Mike and Les ran this awesome machine at various music festivals around BC before I came into possession of the whole setup. Heather and I were smiling up a storm when we registered for a stall at Atlin Music Festival, and spent the entire sunny weekend meeting cool people and selling organic smoothies. Half the fun is pedaling for your own, so made the customer generate the power for their own smoothie.

Many laughs were had 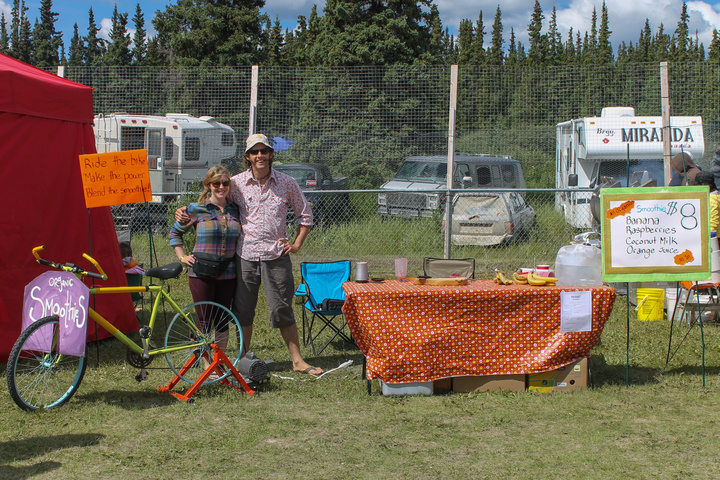 Heather and Dan eagerly awaiting their first customer! (I also stole that shirt off my brother – it’s become my favorite)

How did the whole enterprise go? We sold out on Sunday morning, and managed to make a little cash to boot.
Of course, we drank about 10 smoothies each for the weekend, so it’s any wonder we didn’t get rich

We like to say the whole thing is powered by Joy, so it’s a massive riot to be around.