My Trangia Lightweight Backpacking Alcohol Stove has been reliable for 8+ years. From $77.58 From CDN$141.44 on Amazon

I’ll be the first to admit I don’t strictly follow all road rules when driving in undeveloped countries. Maybe I don’t really follow any of them. Alright, alright, I admit it, I completely ignore them. Driving with the flow of traffic is much safer, and often intersections and speed limits are not signed anyway.

I’m standing on the side of the road with a policeman who is enthusiastically showing me a fantastic photo of the front of my Jeep. It’s in full color and my newly attached front license plate is surprisingly crisp. To be honest, it’s a great photo. Almost magazine worthy. The photo even shows I was driving at 74km/h (45mp/h) when it was taken. That’s cool.

The photo shows the speed because I’m looking at the screen of a fancy new radar gun. Uh-Oh.

He is short and stern, wearing an impeccable uniform with the kind of pomp and flair I imagine of English policemen in the 70s. There are so many stripes, badges and shiny things pinned on it’s difficult to tell what color the fabric is. He has a strip of a mustache that is probably supposed to command respect, but instead brings to mind B-grade movies and shady pool boys.

After waiving me down, he asks to see all my paperwork and checks and re-checks my passport, temporary import for Morocco, drivers license and vehicle insurance. He looks disappointed when he realizes everything is valid. I fumble through in French, betting my lack of it will dissuade further conversation.
He asks me to step out of the Jeep and follow him to his cruiser. Damn. 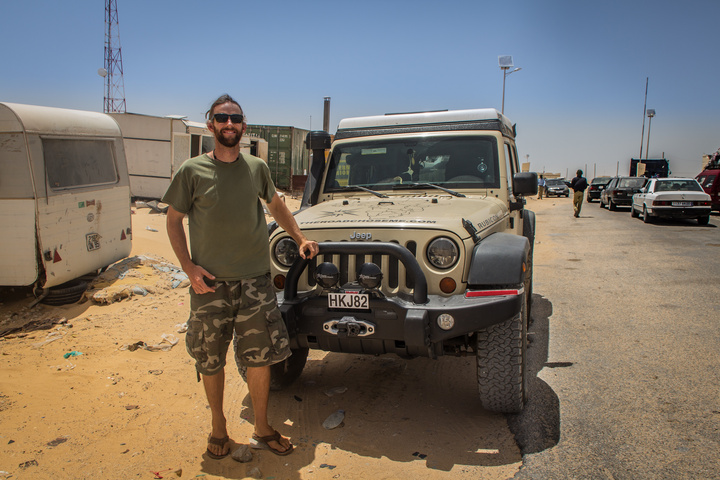 Dan and the Jeep in Morocco

The other officer is sitting in the cruiser smoking a Marlboro Red, not doing much of anything. This must be the boss. Huge reflective aviators cover most of his red round cheeks. I’m disappointed when his cheshire grin reveals not a hint of gold. Still in French they show me the radar gun and explain I was speeding in a 60km/h zone (40mp/h). I try to point out the lack of signs, the truck that was creeping along, and all the other cars that overtook it.
They are not having any of it.

I must pay right now. Here. On the side of the road, to these two characters.
The obvious bribe.

With the most concerned look I can possibly muster I gravely nod, accepting my fate.
My voice trembles as I surprise myself with my acting abilities.

They both grin from ear to ear and the mood lightens up.
“You can go”, says the boss. “Pay attention next time”.

As I hop back in the Jeep it dawns on me I wasn’t the only one playing the game.

He said that in perfect English.