The road quickly deteriorates, just as I was told it would. I’m down to first gear for massive potholes, and most are full of water. At times the road is wide enough for two vehicles, though often it’s a single lane track. I’m driving through thick jungle, and in many, many places it has been smashed down and replaced by enormous palm tree plantations, at times stretching far to the horizon in all directions. 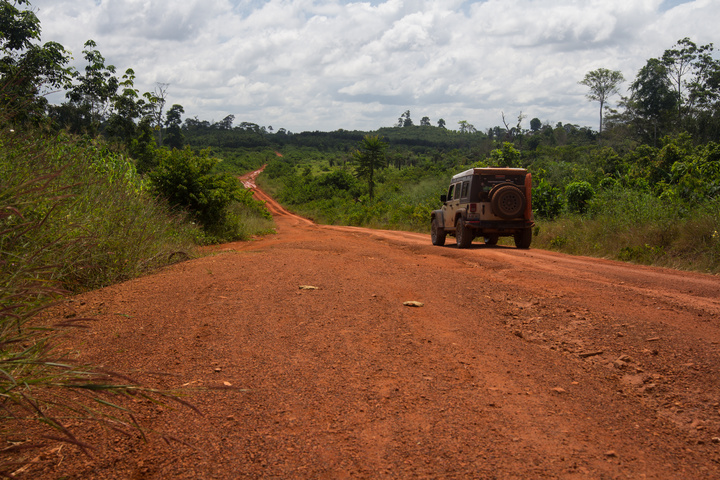 The highway heading south, into the jungle 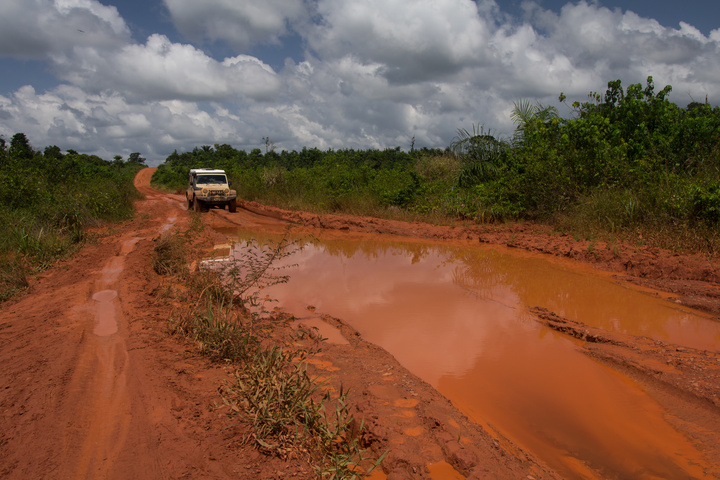 One of the many, many mud holes on the highway

I begin to encounter massive mud pits on the road, severely chopped up by the dangerously overloaded transport trucks moving the palm, cocoa and rubber. They are no problem for the Jeep, especially with the front and rear lockers engaged, though the problem starts when I come across trucks stuck in the pits, completely blocking the road. When I say stuck, I really mean stuck. One crew has been in the mud for a week, and are attempting to unload their truck by hand to make it light enough to get out under it’s own power. There is a route to the side I’m tempted to try, though I sink up to my knees walking it, and the mud is severely sticky and strong, so I don’t love my chances. 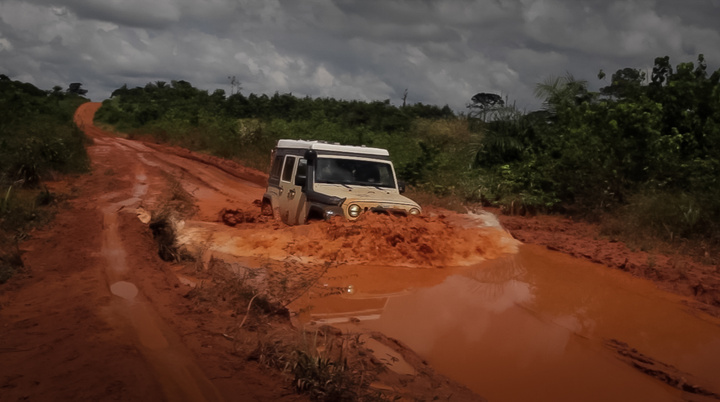 As luck would have it a local guy tells me there is a road to bypass the mess, so he jumps in the Jeep and we set out on about 5 miles of track through the jungle. This tracks itself also has mud pits and a lot of standing water, though thankfully no struck trucks blocking the way forward. Returning back to the main road the man only asks for water, which I immediately give.

After ten hours on the road I’ve covered less than 60 miles, and roll into the sizeable town of Tai right at dark. A friendly kid leads me to the two hotels in town, though neither has any kind of secure parking, so I don’t really like my options. I backtrack into the center of town and pull into the massive compound of a Catholic Mission I saw. The Father is extremely friendly and welcoming, and insists I have dinner with him, and won’t let me camp in the Jeep, insisting I take a room inside. A massive thunderstorm rolls in, dumping an impossible amount of rain in a short time. After a bucket shower I fall asleep the second my head hits the pillow, despite the still intense humidity. 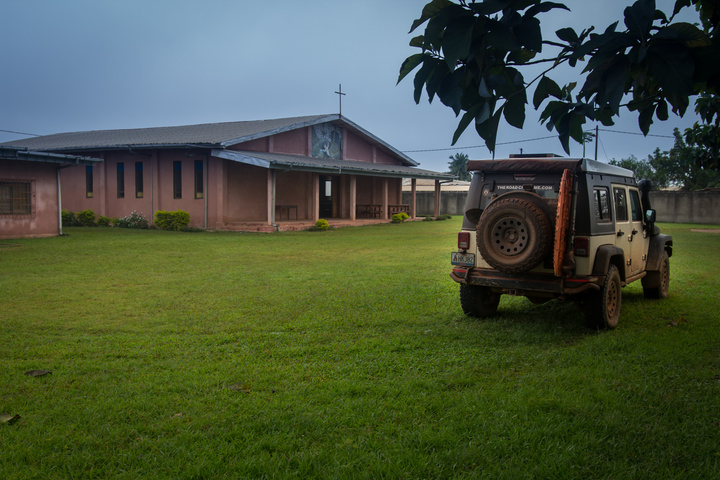 Parked at the catholic mission – a little fenced oasis

In the morning I attend Mass, and The Father proudly introduces me to his congregation. The whole mass is in French, so I don’t catch it all, though I feel a little uneasy watching the locals give money to the Church, then a lot uneasy when they are asked to give yet again. I am extremely uncomfortable when the whole fire and brimstone bit starts, and am horrified when it goes on for almost 30 minutes of The Father screaming at the top of his lungs. I leave as quickly as is polite after Mass has finished. 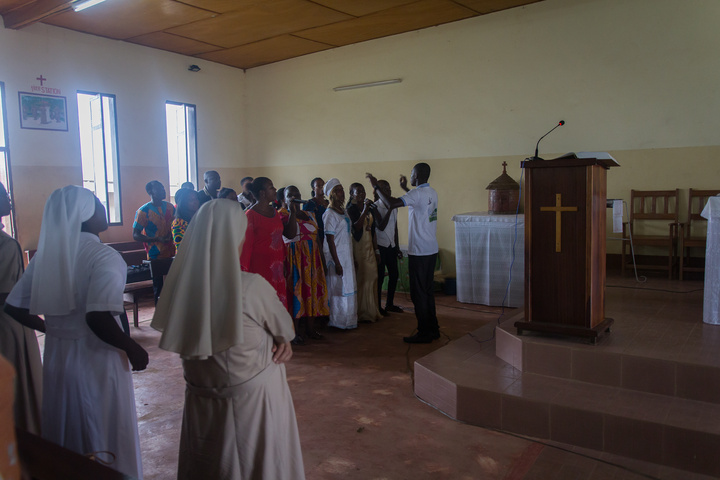 Mass at the Tai mission

I repeat much the same story the following day – arriving at mud pits, talking to truck drivers and weaving around stuck vehicles whenever possible. At one point a truck is trying endlessly to climb a slick incline, with the driver hopelessly spinning the wheels while men claw at the mud with their hands and throw the odd rock under bald tires. After an hour of this in the scorching sun a few locals finally convince the driver to backup so a few regular vehicles can get around. After another monster day (12 hours almost exclusively in 1st gear) and not much distance, I arrive at my destination – National Park Tia.

The place is deserted and I’m just starting to wonder what to do when the caretaker arrives on a motorbike. His son saw me drive through the small town on the main road, and knew I’d be at the park. I organize with him to camp at the entrance to the park. The spectacular but neglected lodge is extremely expensive, and looks like something straight out of Jurassic Park. A guide will come in the morning to take me deep into the park. Just as I finish cooking dinner the skies open again, and I get the feeling this is a regular afternoon/evening occurrence this close to the ocean.
Again, I fall asleep the second my head hits the pillow, and sleep like a rock, completely exhausted. 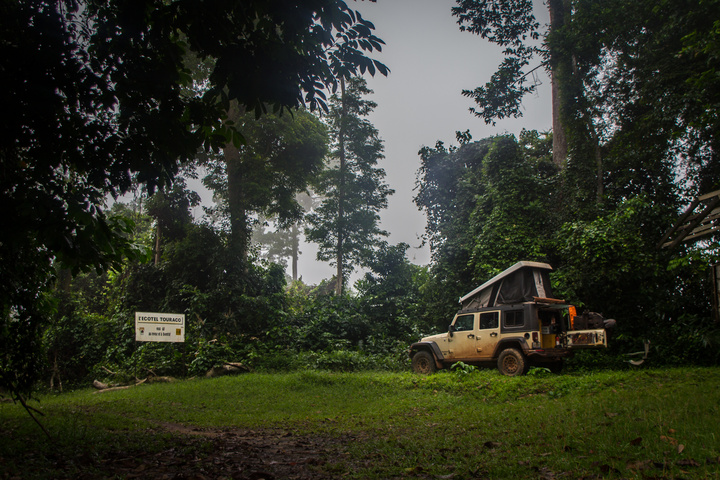 In the morning I meet up with my guide and we set off deep into the park. It’s famous for it’s Chimpanzees, which use rocks to break open hard-shelled fruit. There are also pygmy elephants in the park, though nobody can guess how few remain after the massive Civil War that only ended relatively recently. The guide explains even the biggest of them are barely taller than me (though obviously a lot heavier)

A few hours later on the jungle path my guide spots a few Chimps, and we takeoff into the jungle after them. At first they are very unhappy to see us, and I feel bad chasing them through the thick forest. I’m drenched in sweat in five minutes, and puffing hard in ten. The guide explains they just don’t know me, and soon they will realize I mean them no harm and will stop trying to get away.

Fleeting glimpses through the jungle

Right on cue they do exactly that, and I’m treated to an amazing display as the group of four sit and smash open fruit with rocks. One in particular takes interest in me, and almost seems proud to show me how good he is at using the rocks. At one point he looks away for a while, distracted by something, and I can see the relief on his face when he remembers to look at me and realizes I have not moved at all. He is totally happy to have me there, and looking at his eye and facial expressions I get the distinct impression he is a lot smarter than I realize.
It’s an amazing experience I won’t soon forget, just me and him sitting on the jungle floor hanging out together. 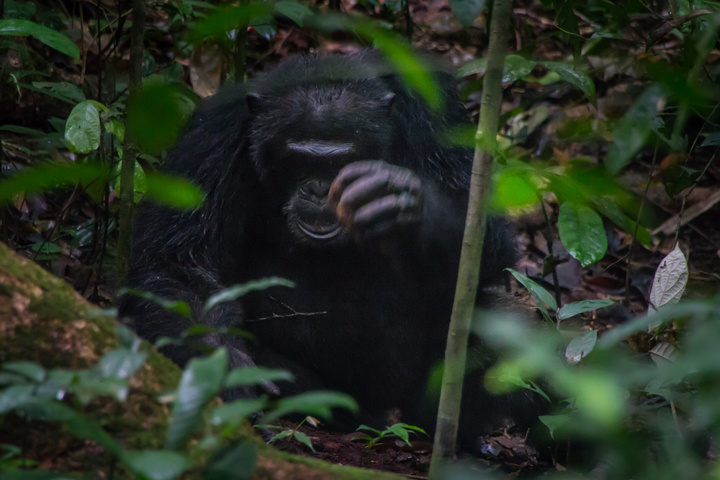 Winding up with a rock to smash the fruit… 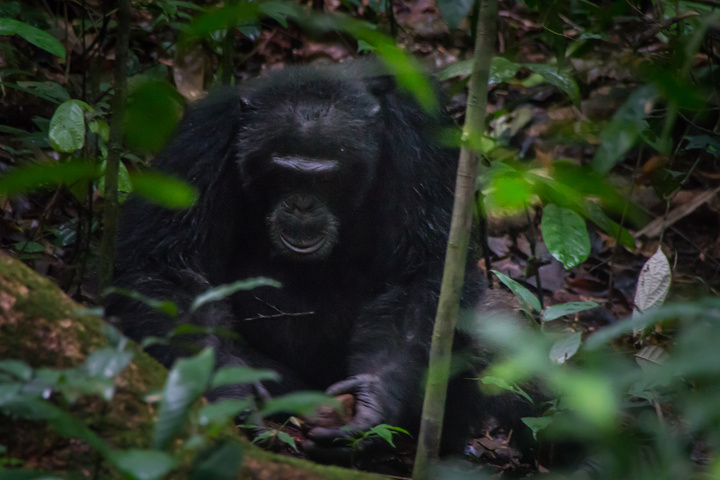 …and smashing down to break the fruit 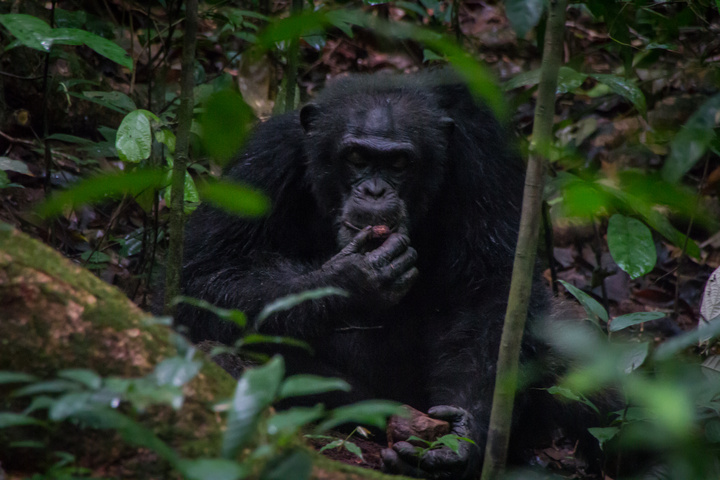 Eating the spoils of the hard work 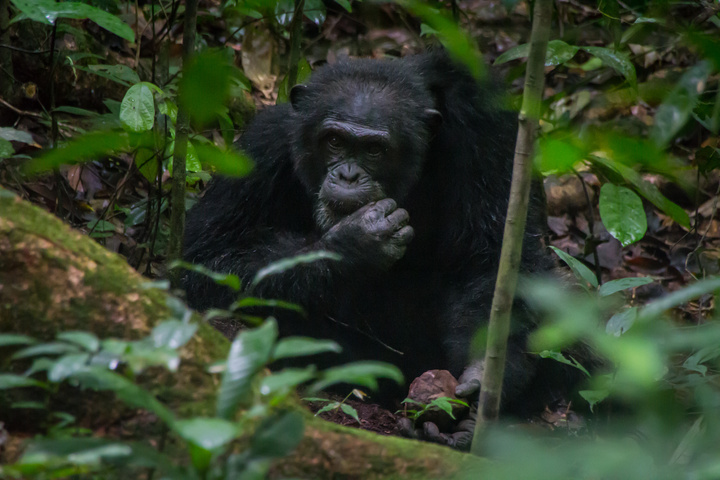 Keeping an eye on me

We sit and watch for a long time before I pry myself away, and we begin the trek back to camp. The skies open and I’m drenched to the bone in less than five minutes, making the remaining two hours of the hike extremely interesting. It’s not even worth dodging puddles and mud pits, and it feels great to walk right through them in my running shoes, sinking half way to my knees.

Back at the Jeep I’m extremely happy to get into dry clothes, before falling asleep without even eating dinner – I’m that tired, and grinning from ear to ear.

After a day on the highway