My Trangia Lightweight Backpacking Alcohol Stove has been reliable for 8+ years. From $77.58 From CDN$141.44 on Amazon

I have thoroughly enjoyed my time in Mali, and it is with reluctance that I finally pack up the Jeep and wave goodbye to The Sleeping Camel in Bamako. I have made some great friends here who I will dearly miss.
I once told a friend the worst part about traveling is continually saying “goodbye” to new friends. He flipped that around and said the best part is continually saying “hello” and making new friends.
I’ll go with the later.

I move South, aiming for the small border at Manankoro in the extreme North West of Ivory Coast. I know nothing of the road or the border, and as usual I vastly overestimate the distance I will cover in a day. Dusk approaches when I’m still 30 or so miles from the border, so I find an old abandoned side road to camp for the night. It’s peaceful, though stiflingly hot and humid. I have put in a 7 hour driving day to cover less than 200 miles. 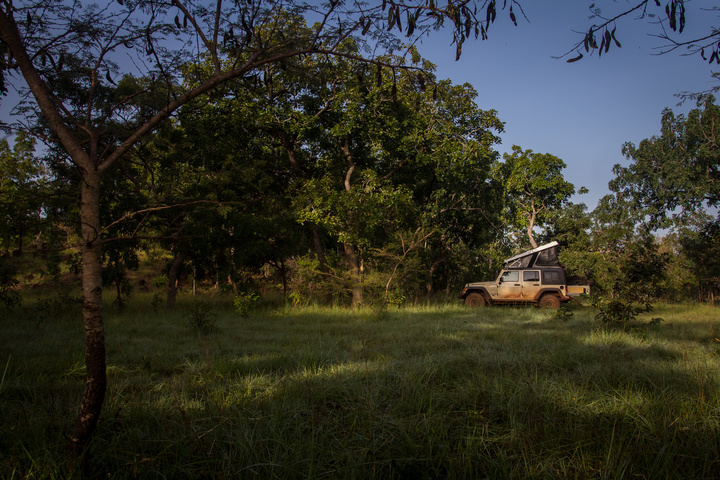 In the morning I arrive on the Malian side, hand in my paperwork for the Jeep, and somehow miss immigration and don’t get an exit stamp in my passport. I hope that doesn’t matter too much. The minute I arrive at the Ivory Coast customs a few men introduce themselves as “the authorities”, set up a make-shift table in the shade and start a negotiation. They explain they are officers (though they have no ID, uniforms or guns…) and are conducting and important medical check. After verifying my Yellow Fever vaccination – which was required to get the entry visa in the first place – they say I must have a meningitis vaccination. If I don’t have one, they can give me one for $50 USD, they explain, while showing me a random box of needles filled with clear liquid.

Of course there is no way I’m going to let them inject me with anything, and I know it’s a scam, though it’s still fun to see their obvious disappointment when I produce my vaccination booklet showing my up-to-date meningitis. Reluctantly, they let me head to Customs.

The lone lady working there is extremely friendly, though she insists she must have the approval of her boss before she can write out a temporary import permit for the Jeep. I wait a couple of hours, and amazingly she prepares lunch for me, a deliciously spicy rice-with-sauce combination. An hour later when the paperwork is done (without a call from her boss) she says the paperwork is free, though I can give her a gift for the food, if I like. I’m quite certain she delayed on purpose to then “sell” me lunch, though it is delicious and I’m happy to pay the usual price for it. The paperwork I get for the Jeep is only a temporary hand-written copy, and I’ll have to go to the head of Customs further down the road in the bigger city for a computerized version. 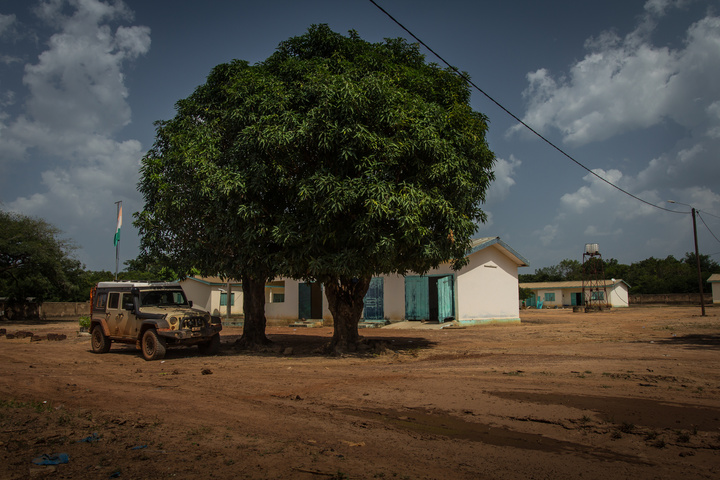 The international border from Mali to Ivory Coast

The ten mile road to the immigration shack is shockingly bad rutted mud and potholes filled with water, so much so I use low range first, simply to go slow enough. Almost immediately the large immigration officer starts yelling at me and is very unfriendly. He notices the start date for the Jeep temporary import is actually tomorrow, and then is even more hostile. Thinking of my best option, I drive back to customs on the horrible road, have the date corrected and a letter written explaining the mistake, then turn around and drive back to immigration. The friendly customs lady is happy to point out everyone says the immigration guy is seriously unfriendly, but there is nothing she can do to help.

Again the immigration guy is mean, and has now called in support. An even larger man wearing military uniform with a pistol on his side – apparently his boss. This man struts around like his is King, and I can tell by the way he looks at me and talks to me he has nothing but contempt for me, even though I remain calm and polite. After checking every single document I have multiple times, the man is trying very hard to make me understand I must “give” him some money. A simple gift, you understand. I’m pretending not to speak or understand French, and they speak pretty broken English, which works to my advantage. I hear one of the junior men say in French “The whites always have the right paperwork” while he checks my insurance, to which the boss replies “Why do the whites make it so hard to get money?”. 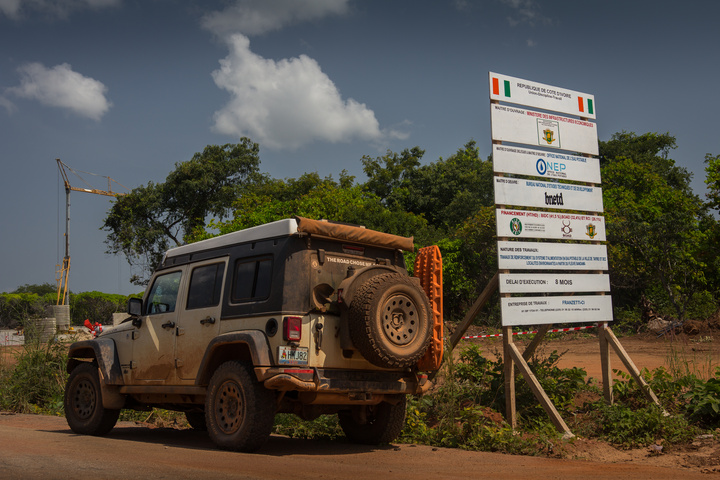 After explaining over and over again the ambassador told me I must not pay any money at the border (he didn’t), all of the men are trying to convince the boss to let me through. Eventually my passport is stamped in, and the boss takes it and walks over to my car. He tries one last time to get 10,000CFA from me (about $20), and is still very determined. He is disgusted when I explain I have no cash and need an ATM. He rants about how this is not Europe and there are not ATMs everywhere, clearly angry. Very unhappily he hands over my passport and I’m finally free to drive into Ivory Coast, without paying a cent.

Due to the hold up at the border, and the horribly bad roads I fall well short of my target for the day, and pull into a small village right at dark. I ask to speak to the chief, who grants me permission to camp in his village, right in front of his house. With the chief’s permission, I could leave the keys in the Jeep and all the windows down without a worry in the world. Nobody will go against the chief.
I’m exhausted from another long, hot day – 10 hours on the go for a distance of less than 100 miles – and am shocked when almost immediately a plate of delicious food and cold water is given to me, and friendly locals sit and chit-chat. A small army of children assembles who stare with bright, curious eyes. 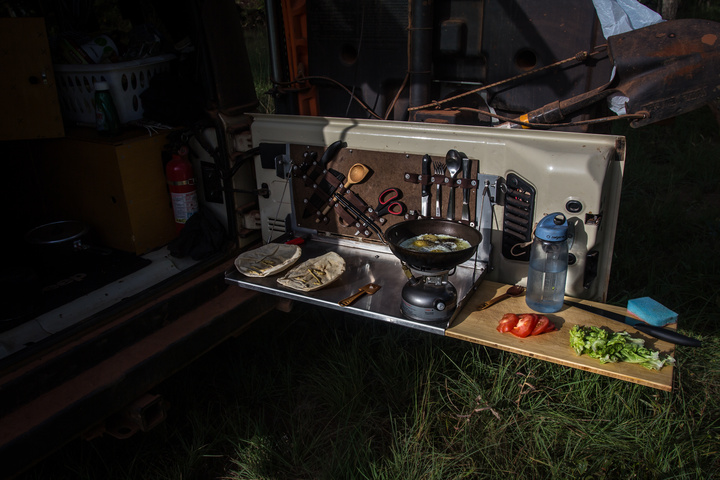 A typical breakfast on the road – egg, tomato and lettuce wraps.

I sleep like a rock, and am delighted to see many children still surrounding the Jeep when I wake at sunrise to start my first full day in African country number eight.

For all the details to drive your own vehicle into Ivory Coast, including gas prices, border procedures, paperwork, insurance, camping and more, see http://wikioverland.org/Ivory_Coast