It seems that everyone I talk to has a different story about which DRC/Angola border is horrible. There appear to be stories about violence, or road blocks or even having guns pointed at people at all the various crossings. Eventually, we simply decide to go for the closest one, Luvo

At one point we thought we might stay a night in the final town in DRC – though as soon as I enter town I know we don’t want to do that. Trash covers every possible surface, the stench is monumental, and hundreds of grubby people mill about in the trash and broken-down vehicles scattered alongside the road. This is clearly not the kind of place we want to spend a night.

I pull into a clean and functional Total gas station, and the friendly guys are happy to give me the rate of the day for my US dollars. I pay around $4/gallon for a small splash into the main tank. I know gas is much cheaper in Angola, though I want to be 100% certain I will make it!

After asking directions from a friendly Policeman, we soon find ourselves on the road to the border, and then stopped at one of DRCs infamous “traffic control” checkpoints. Here there is a large barrier crosses the road, and an armed military man lounges in the shade watching us. I intentionally park the jeep completely blocking the barrier and kill the engine. We are told me must buy a ticket to pass this way, and after looking at the price sheet I see regular cars are a few dollars, though foreigner cars are $50USD, each.
There is no explanation as to why.
We have been expecting this in the DRC, with some people encountering this same crap many times during their crossing.

My friend immediately takes the most senior man by the arm, and leads him to our vehicles. He explains our international registration includes these kinds of fees – that’s why we pay so much. Our government has an agreement with the government of DRC. After all, he says, that is how we are allowed to drive here in the first place. We must lodge our route with our government, who will pay the appropriate fees to the DRC government. Over and over again we repeat this, so many times it is nauseating.

As we have come to love, eventually the senior man sees our point of view. He completely agrees with us, and instructs everyone around to let us pass, without paying for any kind of ticket. After a round of thanks we quickly move on before anyone can change their minds.

Another few hundred yards down the road we are stopped at a checkpoint, which is clearly some Police trying to get whatever they can from anyone that will give it to them. There are armed and uniformed DRC Police and along with a bunch of onlookers they start to demand I hand over this and that, and give them this and that. As always I remain polite and firm, and repeat time and time again I simply have nothing to give – I have run out of food and water, I need to get some myself. One young and heavily armed man leans in my window and starts grabbing at stuff which I don’t like one bit. In response I open the door which forces him back, and so I quickly put up the window and jump out, locking the doors.

Now the doors are locked, I lounge in the shade until basically everyone ignores me, then I jump in the Jeep and drive through, without paying or giving anything.

Arriving at the border town of Luvo I have an extremely strong Mad Max impression. Looking around I realize the only thing they got wrong in those movies is the trash. It is literally knee deep and absolutely everywhere. Revolting muddy puddles line the street, and the stench is overpowering. Thousands of people are flowing back and forth across the border, apparently buying and selling whatever they can and pulling it in hand carts. Loud motorbike taxis tear up and down, and thousands of shacks line the road selling the stuff that has crossed the border.
It occurs to me this is one of the points on earth where the Undeveloped World borders the Developing/Developed world (like Mexico/US, Morocco/Europe), and so the flow of people and goods is immense. As I soon learn, it is trivial to buy consumer goods in Angola which I have not seen for many, many months in West/Central Africa. At a quick glance the people are either carrying soft drink in huge quantities, or consumer goods like flat screen TVs and microwaves.

Still in the DRC we stop to get our Customs paperwork sorted out, and some men sitting in the shade enter our details in a huge ledger, as always. Angola has a thriving black market on their currency (The Kwanza), and so we ask around for the best rate possible before changing a huge sum of money. Again, I feel quite safe with over $500 USD in cash out in the open – the guys changing money leave thousands and thousands sitting on their little tables. I get 36,000 Kwanza for each $100USD, so I have a massive stack to stash. A little further down we pull into an Immigration compound and wait ten minutes while the friendly officers there fight with their computer to get us swiped out of DRC. 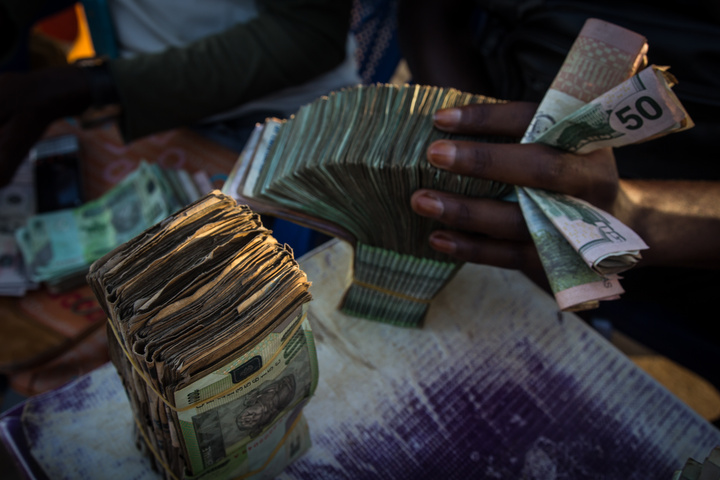 Changing money on the side of the road

I need to pause and impress on you how long it has been since I have seen a computer, or for anyone to swipe my passport. The last time that happened was when I entered Mauritania, something like 16 countries and almost a year and 20,000 miles ago. I am stunned, and find it hard to believe what I am seeing.
Adding to my confusion, I watch a man casually walk across the parking lot with a full-size fridge on his head. He is balancing it with one hand, and does not appear to be having any difficulty. I am pouring sweat in the heat and humidity, and I am standing in the shade doing a whole lot of nothing.

Eventually we are clear to leave the DRC, and immediately drive through huge steel gates then over a one-lane bridge, which is the International Border. Immediately through the gates on the other side, we are stopped at a checkpoint, the first of Angola. After a long wait due to a lot of confusion about what to do with us, and a quick look inside the vehicles, we move forward, less than fifty yards to the next checkpoint where exactly the same thing happens.
Again there is a huge wait and a lot of confusion until we can move forward – to yet ANOTHER checkpoint. It is now late in the afternoon, and I realize how difficult life is now going to be in Portuguese instead of French which I have come to rely on.
There is nothing I can do other than drink cold water and wait. 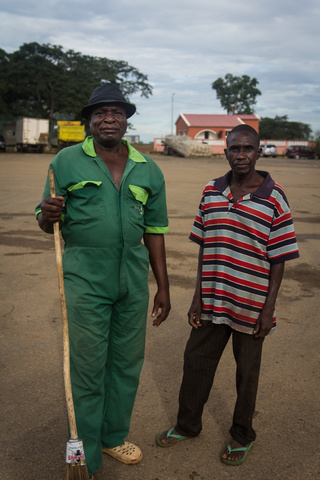 These friendly guys are sweeping the street – can you believe it!

Finally, we move forward through even bigger steel gates and can park off to the side in front of actual Immigration and Customs. I am immediately stuck by the difference here – there is almost no trash, and buildings appear large, solid and maintained. I sense I have entered another world entirely.

We get entrance stamps in our passports no problem, though there is a problem with Customs. I must pay a small fee for my Temporary Import Permit for the Jeep at the bank, and the banks are closed because it is after 5pm.

I soon realize there is nothing to be done until morning.
We literally can’t go forward or back.
We are stuck here for the night.

Camping in front of Customs / Bank 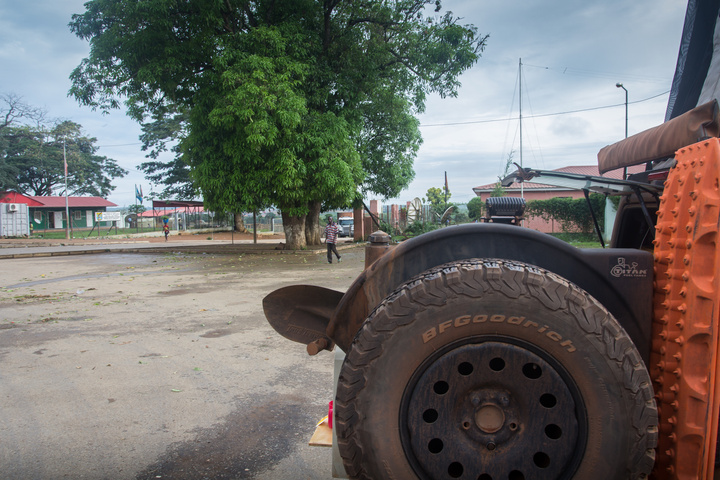 Looking back to the gates into DRC