From the minute I drive into Hippocampe, I start asking around for gas. The owner places a huge order for diesel every now and again, and he is pretty sure the company would have gas and would even deliver it. Unfortunately the minimum order is 1000 litres, and he has no use for gas. The security guard on the gate hears I need gas and immediately springs into action. He makes call after call, and assures me he will eventually find some. It is really just a question of price. It seems enterprising locals fill up containers and then bide their time until they can make a profit.

The official price here is 595 CFA/litre, something just under $1/litre. or around $3.40 USD / gallon. Given the huge shortage I am of course going to pay more, the question is only how much more. Eventually the guard assures me it can be delivered tonight, and will cost 1,500 CFA/litre, three times the official rate. ( around $10USD / gallon)

I sit and think about this for some time. While it sucks to pay so much, I try to put it all in perspective. Congo has virtually no gas or diesel right now, and I have no idea how much longer that might last. I don’t think the situation here in the big city is going to get better anytime soon. When I really think about it, I need to get out of here somehow. Paying a hundred dollars for the convenience suddenly sounds very worth it. I try to negotiate the price to 1,300, though the seller on the end of the phone will not accept. She knows she has what I want.

After a sleepless night in the intensely hot and humid concrete parking lot, my savior arrives early in the morning. With three 25 liter containers, I can almost fill the main tank. I wanted more, but it was not available. Two of the containers are nice and clear and seem to smell about right, though one has a lot of brown muck on the bottom that I really don’t like the look of. Filtering it through my funnel adds a little piece of mind, and I leave the dregs in that container – I would rather not. 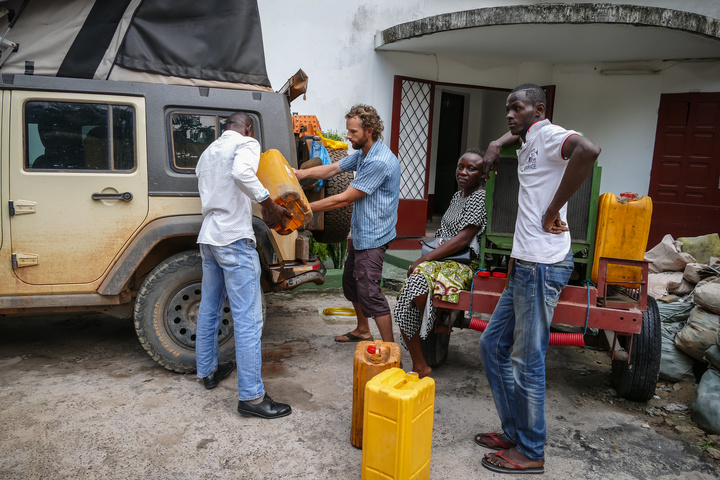 Filling the Jeep with the extremely expensive gas

With the tank full I immediately drive across the city to the Angolan embassy – the final Visa I must obtain to traverse the coast. This is notoriously the most difficult visa to get, and I have intentionally waited until now to get it. Many people get it way back in Ghana, but that leaves them only eight weeks to cover seven countries – rushing is something I worked hard to avoid.

My friend Thomas was unable to get the visa this way, and was forced to drive across the DRC. I really, really don’t want to do that. I will just have to find a way to get the visa, no matter what!

As soon as I walk in the door I can tell this will not work. The lady at the desk barely looks at me as she explains non-residents will not be issued a visa here. The ambassador will tell me the same thing, she assures me. I should go to the consulate in Pointe-Noire, she says. Trying to explain my situation goes absolutely no where fast.

The new freeway to Pointe-Noire has had some problems with bandits lately, and there have been a few severe incidents in the last weeks, including a bridge bombing by anti-government rebels. I ask around and quite a few people assure me I will be fine as long as I get the whole drive done in daylight, and keep moving if things look sketchy.

Back at Hippocampe I assess my options. I am not looking forward to another sleepless night in the intense humidity, and so I start to look at distances on the map. It is still early in the morning, and I can make it 600kms (375 miles) with the gas I now have in the Jeep. I will just have to find some on the way.

And so I drive North out of Brazzaville, after spending less than 24 hours in the big city.

I run LED Driving Lights from Rigid Industires to light up the night. From $click From CDN$760.52 on Amazon