Again I’m lucky buying gas, and actually fill up at two different stations that don’t even have a waiting line. The official price is just under $3/gal, and I’m happy to keep the main tank above three quarters while the Titan remains full from Djibouti. 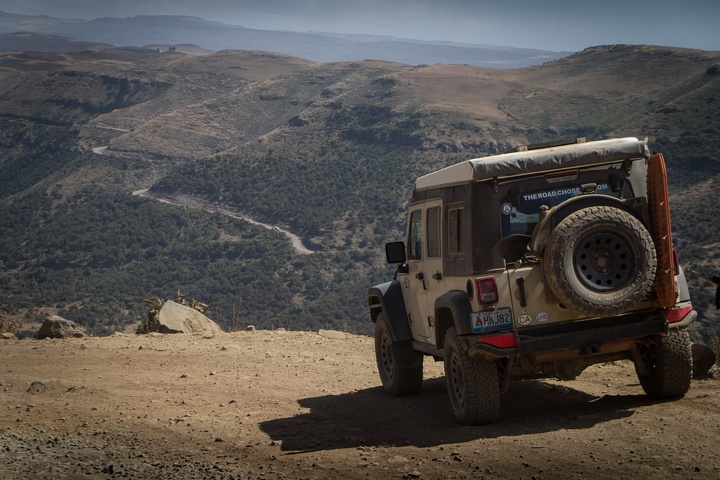 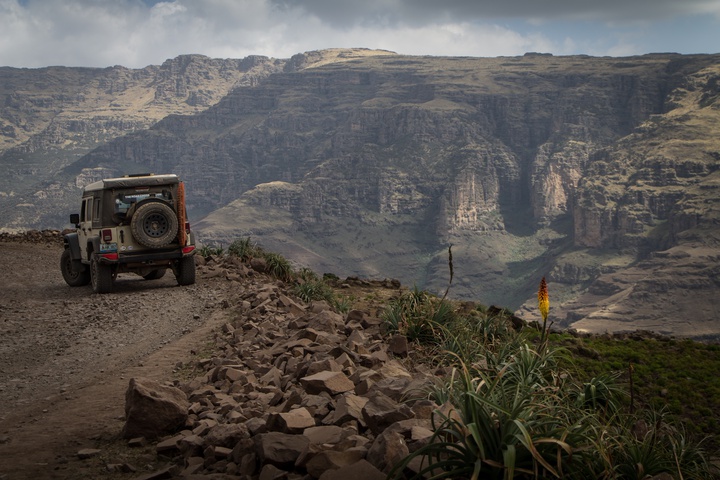 Driving into the mountains

My friends have apparently found a brilliant wild camp, and when I arrived I’m not at all surprised to see them in the middle of an argument with a group of men carrying AK47s. The head of the National Park somehow found out they were here, and he has come to say we can’t camp here, unless we pay for no less than eight armed guards AND pay park entry fees for today and tomorrow. Although no maps show our current location as being inside the park, he insists it is.
None of this feels friendly.

In the morning in Debark we stop at the ranger station to pay the mandatory park entry fees. Our friend from yesterday is running the show and quickly insists we must actually pay for two scouts. The official park rules on the wall nearly state one guide must be had for each five people – and we are exactly give. With lots of arguing and yelling he digs in his heels and will not budge at all. Eventually we give in and all pay for entrance and two scouts for three days and two nights. My scout turns out to be a very gentle elderly man with the requisite AK47, though he does not speak a single word of English and I have picked up only a couple of words in Amharic, the official language of Ethiopia. Nevertheless, we get on well. 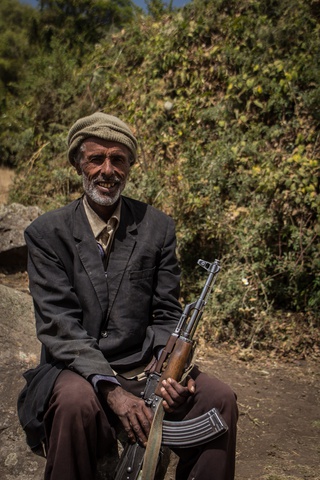 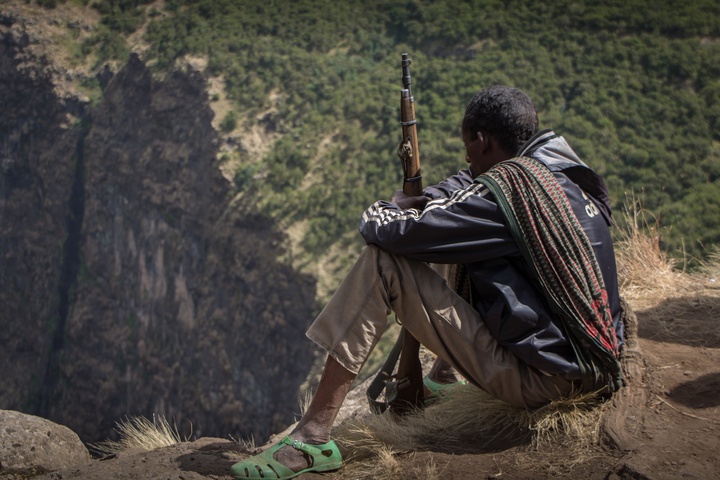 Our other scout, watching the mountains

Somehow I was expecting jagged peaks, though the mountains turn out to be much more friendly and accessible. A winding and rambling road has been cut into the heart of them, and in the afternoon we find ourselves short of breath at 10,500 feet (3,200m) and our campsite for the night, Camp Chennek. 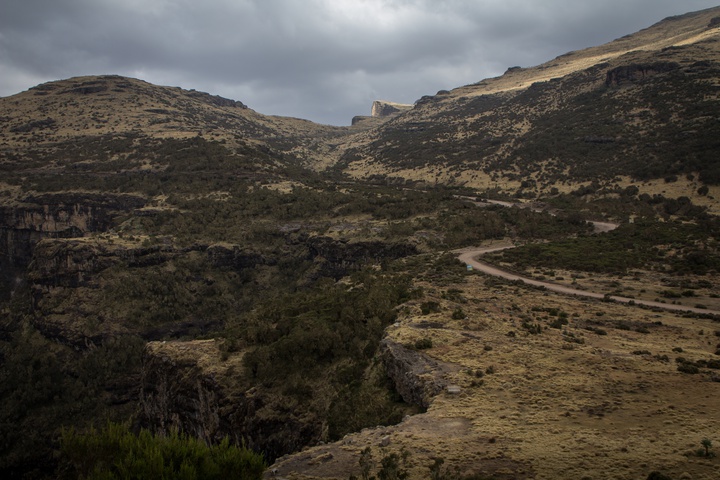 The winding road is impressive 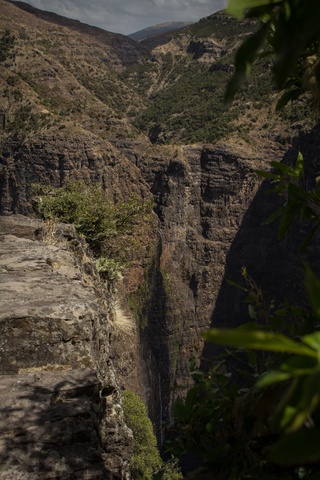 From the second I switch off the engine the usual game starts, and man says I am not allowed to park or camp where I am. He insists I can only park in the official parking lot, and doesn’t seem to care that it’s completely full.

After a lot of angry back and forward and arguing loudly with my fiends, I step in to try and negotiate a peace deal.
When I politely tell the man we can’t find a better option, and can he please tell us where it would be OK for us to camp and park, he says
“I’m not here to find a solution”. 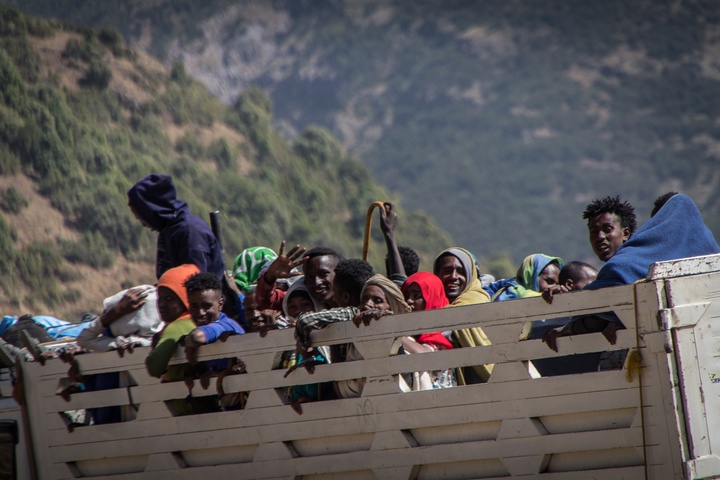 People always smile, no matter what 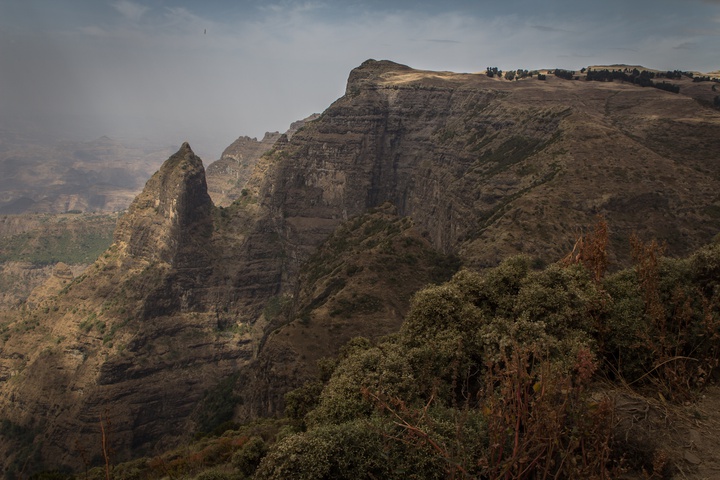 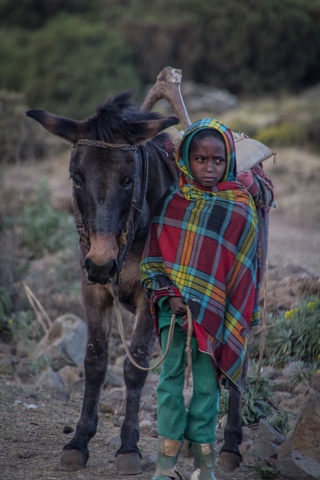 Wow, this is quite the reception at the official campground of a National Park, after we’ve forked over a good deal of money for entrance and a mandatory scout.

Sometimes I get the distinct feeling Ethiopians don’t want tourists at all, and that in fact I’m unwelcome here.
This is the first time on the entire continent I have felt this way. 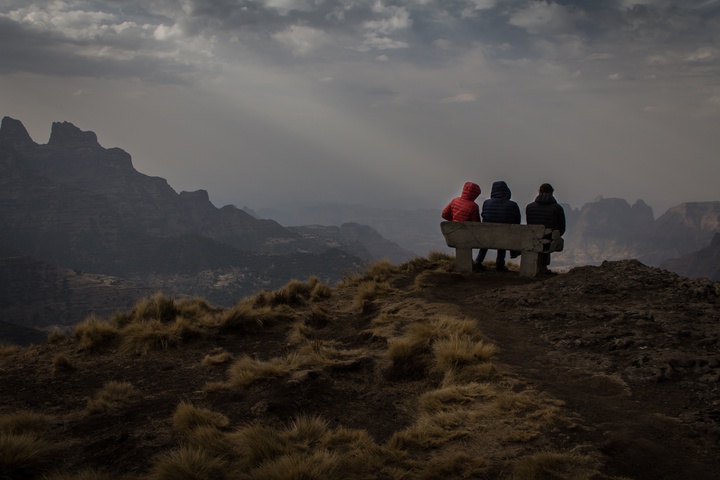 The views are stunning

It’s a good thing the mountains are beautiful, which makes up for a lot!