I arrive at the major border from Guinea to Mali around midday, and of course all the officials are somewhere else, taking their lunch break. I am inside the immigration building in Guinea when a young man tries to take my paperwork and passport from a uniformed officer and walk out. I really don’t like that and get into an actual tug of war with my paperwork, saying I simply can’t let him have it. Eventually an officer explains this is a high-ranking policeman, and I must go with him. Ooops.

After a few apologies, we jump in the Jeep together and go up to Police headquarters to check with his boss. Right on time Guinea lets out one last torrential downpour, and we’re both soaking wet after the 10 second dash into a building. Soon the roads and surrounds are a flowing river, though nobody seems to care. After the friendly head of customs checks my paperwork and gets the whole story (the junior officer had never seen my exact temporary import permit before…), he’s more than happy to send me on, and I leave Guinea without issue.

Arriving in Mali I have my temperature taken for the first time, I assume due to the now finished Ebola outbreak in Guinea. The girlfriend of the sleeping officer points an electronic meter at my face, though I don’t think she can make it work, and just writes down the same temperature as the line above. In fact, I see hundreds of lines in the immigration book where every entry has the same temperature listed. Hmmmmm. 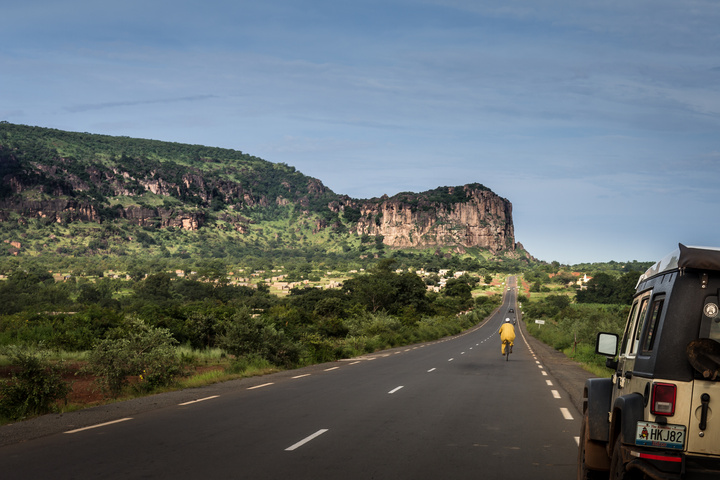 Arriving in Mali I catch the last of the mountains

A visit to customs nets me a temporary import permit for one month for the Jeep, though we hit a snag when the officer asks for 5,000CFA, around $10USD. I was told it’s free, so I play my usual game and say I don’t have any money and need an ATM (In my defense, that’s half true. I don’t have any local currency and don’t want to exchange Euros). There are no ATMs here. The head of customs doesn’t like this much, but quickly realizes I will be stuck because I have no money. When I see many other locals paying the money and getting very official receipts, I realize I am probably supposed to pay – but it’s too late to change my story now.
I’ve done it now.

After about an hour the man finally signs and stamps everything, and even hands over a stamped receipt. Out of earshot of everyone else he quietly explains I now must give him something in return, and comes to the Jeep with me. I want to avoid giving him anything expensive, or anything that I really need, so I suggest a packet of Marlboros I bought exactly for this purpose way back in Morocco. He takes one look at them and says “made in Senegal, they are crap”, then continues to look around. Eventually I spot my tin coffee cup, and make a great sales pitch about how good it is, which he accepts.
I have never liked it anyway, the coffee stays hot waaaay to long and I always burn myself on it.

Reflecting on that I decide I made a good trade, and I drive off into Mali, country number seven. 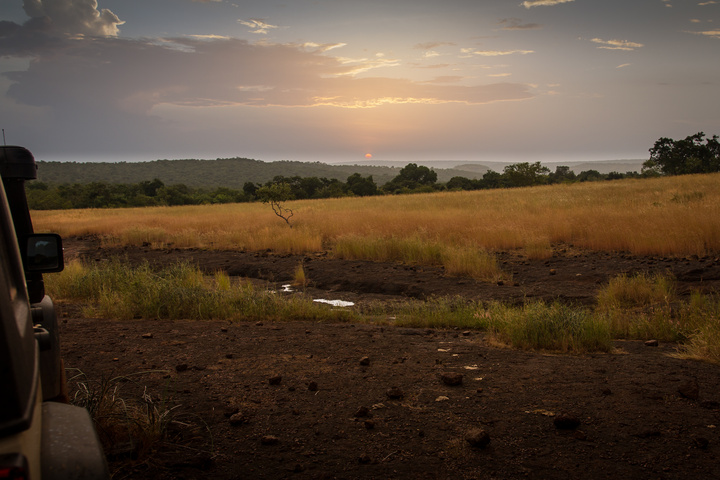 Sunset at my campsite in Southern Mali

All the details to drive your own Overland vehicle into Mali, including gas prices, border procedures, paperwork, insurance, camping and more can be found at http://wikioverland.org/Mali