It’s finally time to leave The Surfers Inn at Playa El Sunzal, and even the Jeep is reluctant to move on – she has a flat battery from all the laptop charging I’ve been doing without starting the engine. A couple of the guys give me a push and we move off with no problems.

I drive way up into the mountains in El Salvador to the town of Perquin, where the government opposition force, the FMLN had their headquarters. The town itself is not much to look at, and with the help of an American in the peace core I manage to find a beautiful campsite on the side of the Rio Sapo, which has amazing swimming beaches and rock pools. 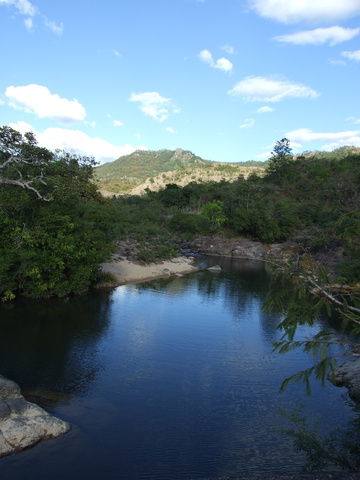 I’m up early the next morning anticipating a big day of travel – just how big it would turn out to be I have no idea. I stop for gas before the Honduran border and the attendants love the map on the hood and we strike up a great conversation. I’ve heard all sorts of horror stories about the military trying to bribe tourists in Honduras, including Rupert who ended up in handcuffs. The guys here tell me the two most common scams are asking you if you have a fire extinguisher and a safety triangle to put on the road in case of an emergency. When you fail to produce them they bribe some money out of you on the threat of arresting you or impounding your vehicle. The gas station immediately before the border sells both and for $16 USD I splash out and purchase them in the hope of avoiding some conflict throughout the day. I actually wanted a fire extinguisher from day one, so it’s about time I got one and the triangle is kind of fun to play with for about 3 seconds. 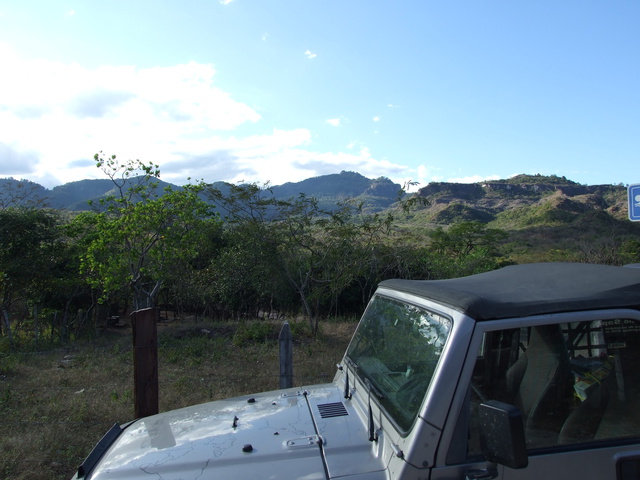 Camping in the mountains of El Salvador, by the Rio Sapo

Even at the gas station guys are trying to “assist” me with the crossing, saying it will take hours without their help and only 20 minutes with. I repeat “no thanks” about a hundred times. Driving up to the El Amatillo border I pass a very long ling of trucks waiting for inspection and pull over at the little shack to cancel my El Salvadorian Jeep paperwork. I need a copy of a form and as usual, an enterprising person has set up a stand with a photocopier just where it’s needed. The guy seems pretty proud of being able to charge the exorbitant fee of 5 cents a copy.

Moving along I arrive at the actual border, where I park and start the process. For unknown reasons the immigration guy spends quite a while typing in my info to the computer and clicking around just so I can leave El Sal. Then a guy wearing a uniform and with ID says I have to pay $3 USD to enter Honduras and he’ll give me a semi-official looking receipt. I don’t really believe him, thinking that the CA-4 stamp in my passport gives me free travel between Guatemala, El Salvador, Honduras and Nicaragua. Knowing I’m going to spend most of the day arguing with people trying to take my money and that fact that it’s only $3 makes me pay it so I can move on.

I leave El Sal no problems, drive over a bridge and find myself in a dry, dusty, shady-looking town that is Honduras. Everyone says immigration is immediately on my right, which I don’t see and eventually circle back around and get directions into an unsigned plain white office building. Realizing I’ll have to spend a long time inside away from the Jeep I walk straight over to the security guard with the pump-action shotgun and ask him to keep an eye on things for some cash, to which he happily agrees.

The paperwork trail begins and I almost fall over when the guy asks for the receipt for the $3 I paid earlier – apparently that thing was legit and I really was supposed to pay it. I’m glad I didn’t argue for too long.
Before all is said and done, the following papers are shuffled.

A very brief inspection of the Jeep follows, I receive a very official-looking piece of paper and I’m free to move along, which I do eagerly.

Literally a hundred meters down the road three military guys wave me down, which is not unusual this close to the border. I intentionally stop in the driving lane, don’t kill the engine and don’t get out. In the first three seconds the guy wants my license and once he has it demands to see my fire extinguisher. I smugly produce it, still in it’s box and with price sticker clearly visible. Not to be deterred he quickly asks for my triangle, which I once again get out, still in it’s box, price sticker front and centre. He quickly pulls it out and is very happy to announce that I in fact need two of them, and one is not good enough. I decide to play another card and start replying to everything with “No entiendo” (I don’t understand) He goes on a rambling tale for five minutes about how I must have two triangles and I’ll have to goto the nearby bank to get money to give to him for the fine. I interject every sentence or two with more “No entiendo” and my best blank-trying-hard-to-understand look.

He starts to get frustrated and walks off with my license to consult his cohorts. He returns and asks if it’s a copy, saying he needs the original, to which I again reply many times with “No entiendo”, all the while smiling and trying my absolute best to understand. The three of them inspect my license very carefully and can clearly tell it’s a copy, but don’t seem to be able to make me understand that 😉 A truck is now blocking the only other lane, so we have a lot of traffic backing up behind us, which is too much for them so they give me back the copy of my license and don’t look at me again as they eagerly move to the next customer.

Another couple of hundred meters down the road I’m stopped again by a friendly guy who wants to see my shiny new paperwork for the Jeep. He needs a copy for his records, which I don’t have. I have three copies of the receipts and many more of all my other documents, but not a copy of the one he needs. I have no choice but to turn around, get stuck in the traffic trying to leave Honduras, get another couple of copies made and come back. As I drive past my military friends I intentionally don’t look at them and have no idea if they tried to wave me down or not.

I hand over the new copy and the guy waves me through, finally free to enter Honduras…