The beautiful city of Fez is the medieval capital of Morocco, founded in 789, and is very well known for it’s sprawling old city, the Medina. The walled city is the oldest city of the entire Arab world, and I feel like I’ve stepped back in time each time I wander the labyrinth of narrow alleys and side streets. The buildings are old, the stones are old – even the donkeys pulling carts look exceptionally old. In many places the cobble stone streets have grooves worn into them from centuries of carts being pulled over them. Vendors are crammed into every possible square inch, selling everything from local arts and crafts to Chinese-made flip flops. 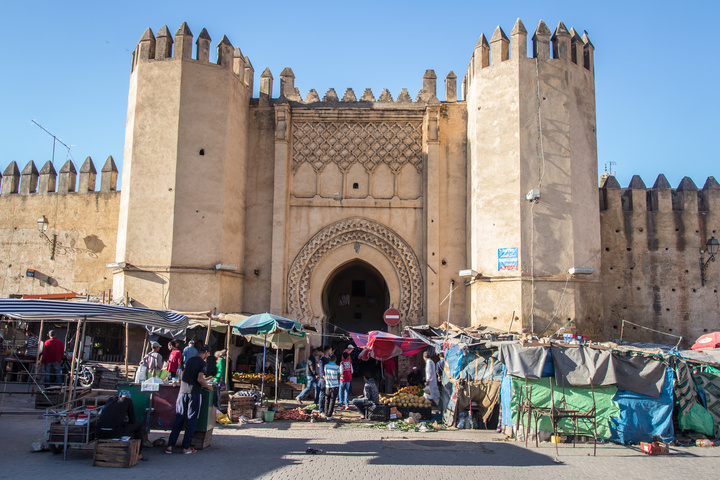 One of the entrances to the mighty old city medina

The Fes Market at ground level

Men constantly yell and try to engage me in conversation about where I am from, where I am going and how long I will be in Morocco. Very quickly they tell me about their cousin’s store that I must see, and a few even grab my arm in an attempt to get me into their store. All prices are seriously negotiable and friendly haggling is a way of life here. 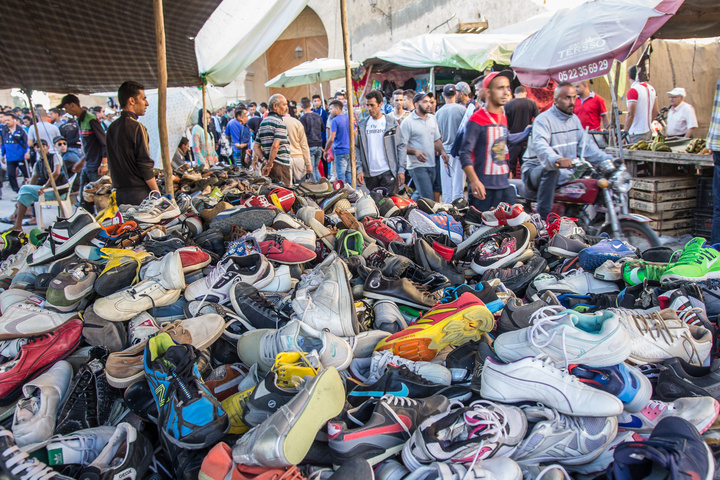 Shoes on sale in a ramshackle market

A highlight is the central tannery where leather is tanned by hand and turned into all manner of products for sale locally and around the world. In my first thirty minutes in the Medina about twenty “guides” try to take me to the tannery – they say it’s free, but of course ask for money after taking me there. Their tactic relies on making me feel bad, and they are very good at it. I get a view of the tannery from above were I see men standing in the tanning baths working with the stinking leather – the conditions are horrendous.

The tannery in the Fes Market 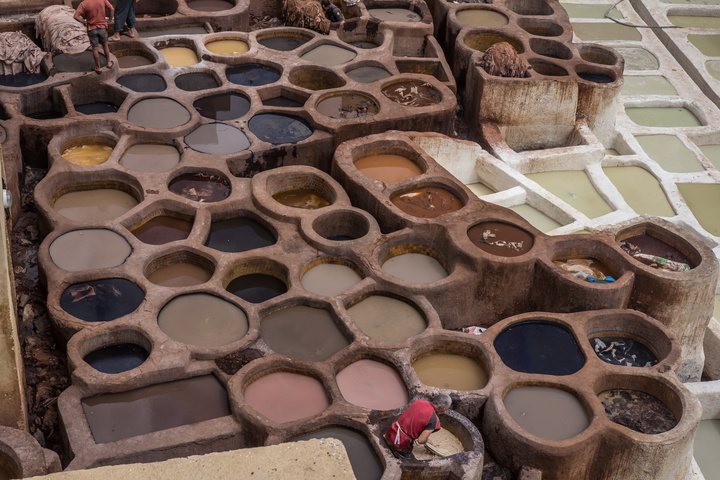 Close up of a man working the leather

The Medina is packed with restaurants and street vendors selling foods I’ve never seen before, with all kinds of Tangine – a kind of crock-pot made with 42 spices – to delicious deserts. I’ve heard about the pigeon pie, called B’Stilla and am excited to try it. The pastry and sugar on top make it dessert-like, and the pigeon filled center tastes somewhat like the dark meat of a turkey, with a delicate mix of spices making a very rich flavor. It’s amusing to place a food order then watch the restaurateur walk across the market to buy the ingredients – some flour, eggs, vegetables and a little meat, which they then whip into a delicious meal in no time. 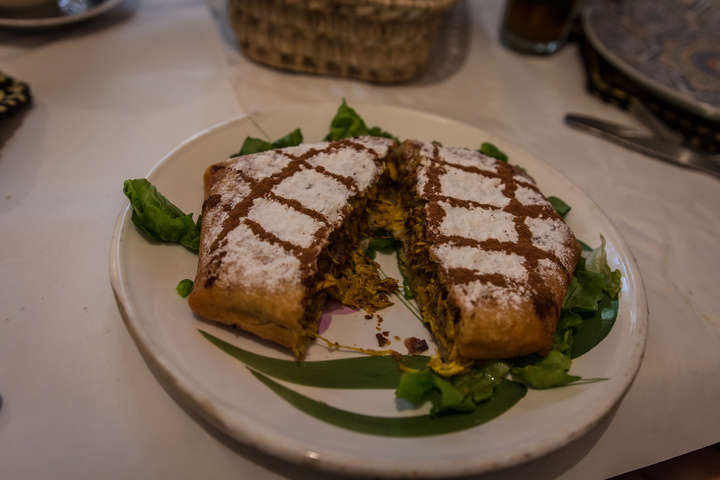 I’m becoming skeptical of basically everyone who tries to befriend me – it’s virtually always a ploy to get me to spend money on something or other. It’s a shame, because it means I’m not having genuine interactions with locals, rather I’m just a wallet with legs. With that in mind I’m quite hesitant when a middle aged man invites me into his tiny store to sit and chat. Aziz is tall and thin with a long flowing beard. He is softly spoken and has a very warm smile. He speaks perfect English, French, Arabic and is learning Spanish. He traveled the world when he was young, and has lived in apartments in Paris and New York, but was eventually drawn back to the old city of Fes where he has a house a stone’s throw away with his wife and two young daughters, which he invites me to the following morning. 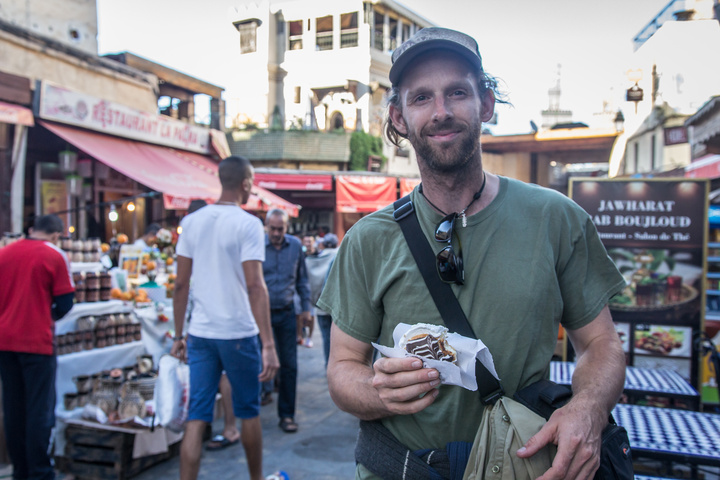 We meet at his store and walk down narrow side-streets which he explains are “semi-private” spaces – home owners and their guests can be here, but anyone else can not. The reason is that all the house doors are wide open. Narrow side-streets and corridors inside houses create a strong breeze that is pulled into the houses and vented up through the open ceiling. Because of this natural draft it’s at least 30 degrees cooler in the house than in the market. No matter where I am in the house there is a constant breeze moving over me, just like if a fan was on. Aziz explains they don’t need air conditioning or heating – building techniques have been perfected over centuries. He doesn’t know exactly how old his house is, but it’s probably at least 700 years. 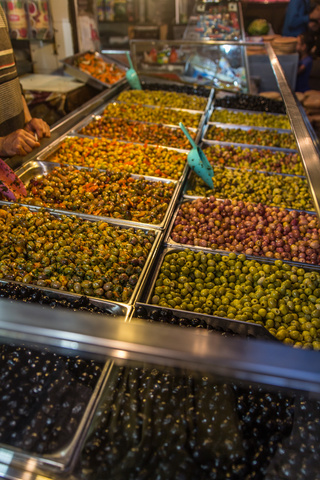 I am in olive heaven!

Over dates and milk we talk about the old city, about Aziz’s travels, about the five pillars of Islam and about his desire to make the pilgrimage to Mecca one day. His daughters are 3 and 5 years old, and are both extremely shy, though also very curious of the stranger in their home. When the time comes Aziz has to walk his daughter to school, so we leave together and walk in that direction. Aziz explains the Medina is a self-contained city and has all the necessities of life inside it – schools, mosques, stores, restaurants and public bathing houses. I’m in awe of this way of life, and this extremely friendly man who asks nothing of me, and simply wanted to teach me about his part of the world that he is so clearly proud of. 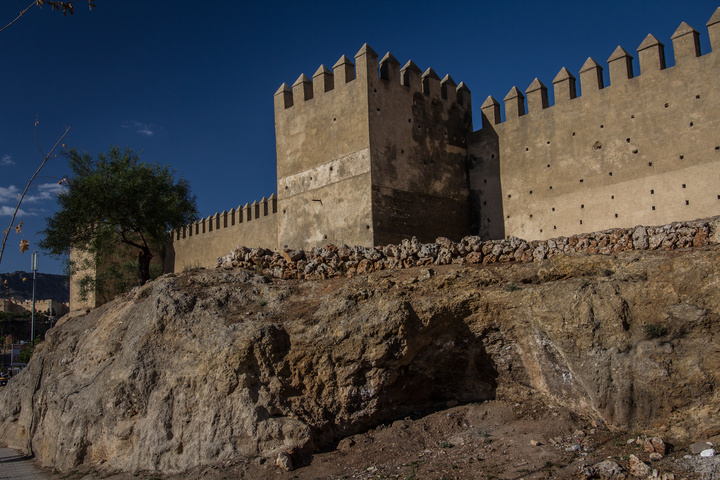 The wall around the ancient city

Unfortunately, as I’m learning in Morocco, many people do not want to have their photo taken, and Aziz politely declines when I ask his permission.

Fes and the Medina are a sight to be seen, I could easily spend three weeks here, but the mountains are calling…

Using a 7 circuit fuse block from Painless Wiring made adding fused circuits to my Jeep easy. From $79.99 From CDN$135.37 on Amazon