Again we are up and moving early, and again the pace on the highway is frenetic. Days are blurring together, so I drink more coffee and eat more fried plantain chips, which of course only makes things worse. Eventually the highway becomes narrow and windy and four lanes eventually turn into two. If anything, the pace only increases.

I am again shocked and disoriented to whip past another dead body in the ditch on the side of the road. Much like the last one, this person appears to have been struck by a car, possibly a few days ago. Again, nobody stops or seems in the least bit concerned.

Police and military checkpoints continue in much the same way, though now the military often have sandbags blocking the road and are clearly more heavily armed, with light tanks and large guns visible. The sandbags are setup to reduce traffic to only one direction, and to proceed I must weave around them at a crawl, obviously to prevent someone plowing through at high speed. A military man stands in the middle giving vague directions, and when I misinterpret his waving, he gets extremely angry at me for coming inside the sandbag area. He yells and waves loudly, and I actually reverse backwards through the artificial S-Bend, and past all the waiting vehicles, much to his amusement. Luckily when I come through properly three minutes later, he does not seem to care about my previous mistake. I think I paid my dues by doing as he said.

Cresting a hill I see many slow vehicles and assume another military stop, though I quickly realize that is not the case. A mini-van has rolled into the ditch, and judging by the scene and number of stopped cars, I would guess it happened only minutes earlier. Onlookers are frantically dragging bleeding people from the van, and I see a pickup with four people in the back who are all badly injured. One man holds his bloodied head in his hands and does not look at all good.
The consequences of this nutty driving are all too clear, though it does not seem to change anyone’s behavior one bit.

I contemplate stopping to help, though conclude my presence can only make things worse, and there are already many onlookers doing what they can. I have been warned repeatedly traffic accidents in Africa can quickly escalate and become violent, and often any white person in the general area will be blamed. The general advice is not to linger, and so I keep moving, feeling terrible about what I have just seen. 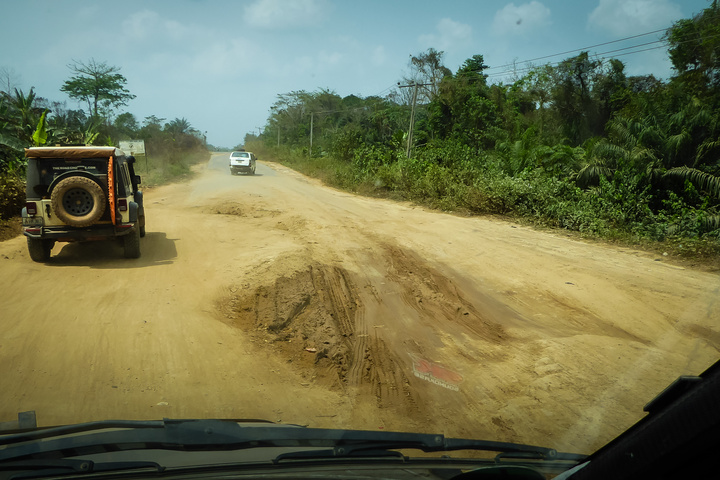 The broken road South to Calabar

Around lunchtime we arrive at the famous town of Ikom, only 15 miles from the border with Cameroon. We have driven clear across the entire country of Nigeria in only three days, without any issues. Here we turn South, aiming for the big city of Calabar where we plan to acquire yet another visa. The road quickly deteriorates into severely broken pavement with monster pot holes. Our progress slows to a crawl, and combined with constant military and police stops, the sixty miles takes over four hours. Somehow we can’t find a “food is ready” place in any of the little villages we pass through, and so lunch is a papaya bought from a lady on the side of the road.

Calabar is a monster city, bigger and more modern and organized than anything I have seen for a very long time. We drive right into the center of downtown and pull into the fenced compound of a nondescript hotel. The security men are actual Nigerian Military, complete with uniforms and AK47s. They are very friendly and happy to chat, though they insist I can not take any photos because they are moonlighting working security here.
One almost lets me hold his rifle, though his buddy suggests that too is a bad idea. 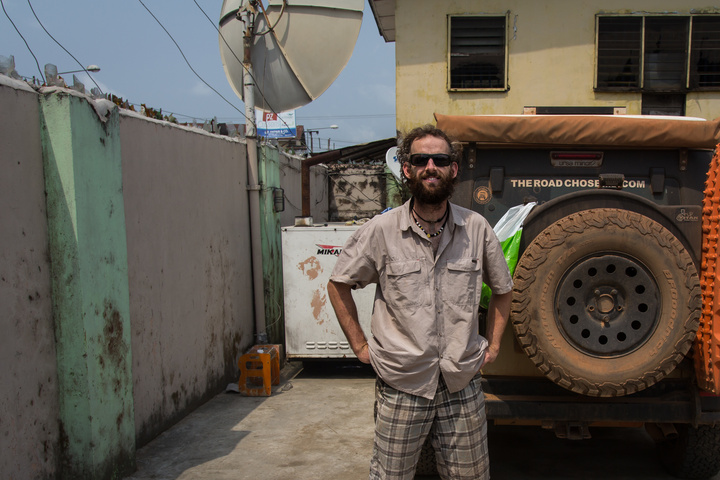 We are impressed and more than a little skeptical to hear the hotel has a “sound proof” generator, and are assured we don’t need to worry that our windows open directly onto the concrete yard with the generator. The toilet does not flush, the “hot shower” is freezing cold and the shower head is broken, though none of that seems to matter in the least. We are inside the compound and there is a soft bed.
Again it’s Jollof rice – this time with beef – for dinner, and again I collapse into bed utterly exhausted.