I installed a couple of Blue Sea Dual USB Sockets in the Jeep to easily charge gear. From $24.45 From CDN$37.99 on Amazon

To protect the engine I'm running a Rugged Ridge Engine and Transmission Skid Plate. From $304.51 From CDN$407.64 on Amazon

I have been curious about little Djibouti for a long time now, and so while in Addis Abba I picked up a one month single entry visa for $90USD. I dropped off my passport one day and was able to collect the visa later that afternoon. Talk about easy.

I put in a couple of monster driving days, managing to buy gas on the black market on the side of the road out of containers. I pay only slightly more than the official price, and after pouring it through my funnel/filter I feel good about it. The Jeep seems to run just  fine on it.

Only a few days ago the road to Djibouti was closed due to protests. The Ethiopian military has pulled out of the region, and the truckers that frequent the road blockaded it in protest because they feel their safety is compromised by the Afar people in the region. I get word from a local the road is in fact open, so at 7am I hit the road, knowing I’m in for a big one.

On and on I drive, pushing East the entire time aiming for the border at Galafi. Djibouti has three monster shipping ports (including a brand new Chinese port that is the size of a city) and Ethiopia is landlocked, and is forced to truck literally everything in from Djibouti. Because of this the good road is absolutely packed with transport trucks and fuel tankers, and I later learn there are more than 2,000 per day on this road alone!

I drive and drive, laying down the miles and feeling as if I’m further from civilization that I have ever been. The landscape is shockingly barren and harsh, and I slowly climb up into rocky and dry mountains, where I feel like I will fall off the end of the Earth. 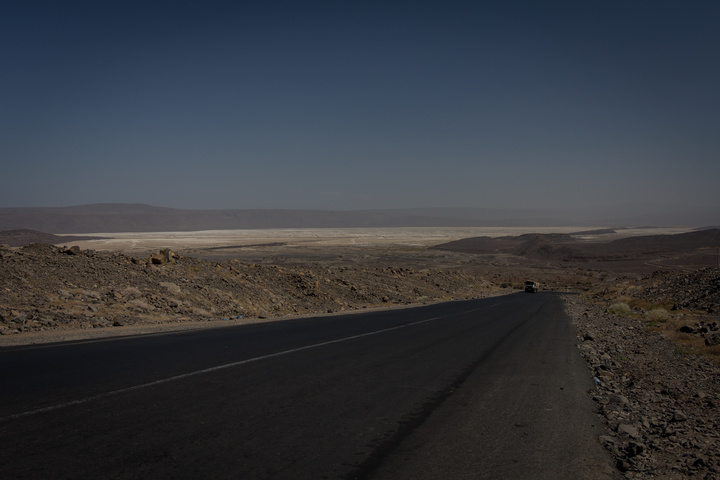 Finally just after lunch I arrive at Ethiopian customs, where I have to sit around in the scorching sun for an hour while everyone is away on lunch. Finally the officials return and after an inspection and search the Jeep is stamped out of Ethiopia. After driving around the monster line of waiting trucks I have no trouble getting stamped out at Immigration, and continue the few miles through no mans land to Djibouti.

Immediately I’m thrown back into French yet again and set about getting myself stamped into what feels like the end of the Earth. Seriously, mad max was close, but it clearly wasn’t hot enough or dry enough to match Djibouti.

Djibouti Customs aka the end of the Earth

Immigration stamps me in, and at Customs the guy quickly tells me that foreigners always try to use a Carnet and they are not accepted in Djibouti – when I tell him I don’t have one he is a bit shocked, and then I think he says something like I need prior permission. After calling his boss everything is sorted out and I’m given a Temporary Import Permit, though it’s only valid for 10 days.

After all this waiting and stamping it’s now 4pm, and I have a very, very long drive ahead. In the next 5 hours I cover only 60 miles on what is the most broken and destroyed paved road I have ever seen in Africa. I drive long past sunset and into the dark, continually surrounded by dust so think I can’t see anything, thanks to all the truck traffic. It appears a new road is – or was – under construction, so for hours at a time it’s better to drive on the extremely rough rocky surface than the old broken tarmac, though that’s also where all the truck are. 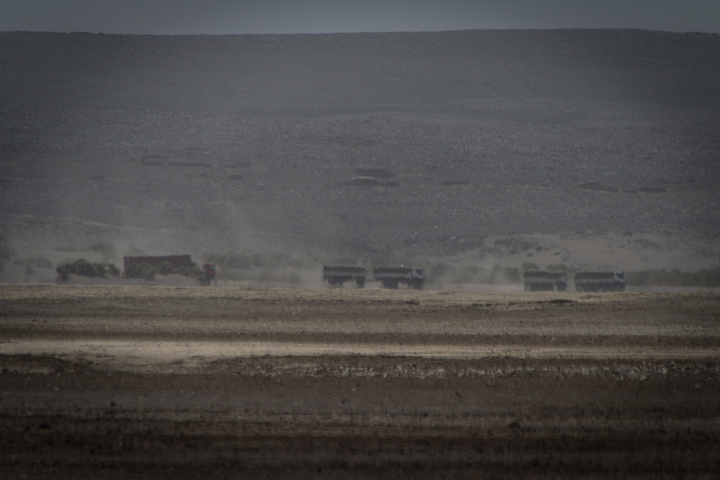 The endless procession of trucks heading to/from the Djibouti port

When I finally climb out of the Jeep at 9pm I negotiate with a hotel manager to camp in the parking lot, and I’m still sixty miles short of my destination of Djibouti City. Exhausted I fall into bed with the thermometer still pushing 100F even though the sun has been down for hours. The heat and dust are intense. 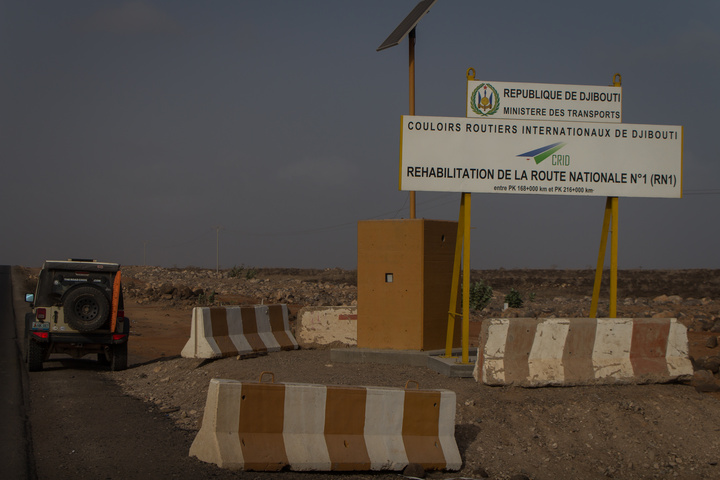 This time I really think I have driven to another planet.

Country number 33 is unlike anything I have ever seen before.